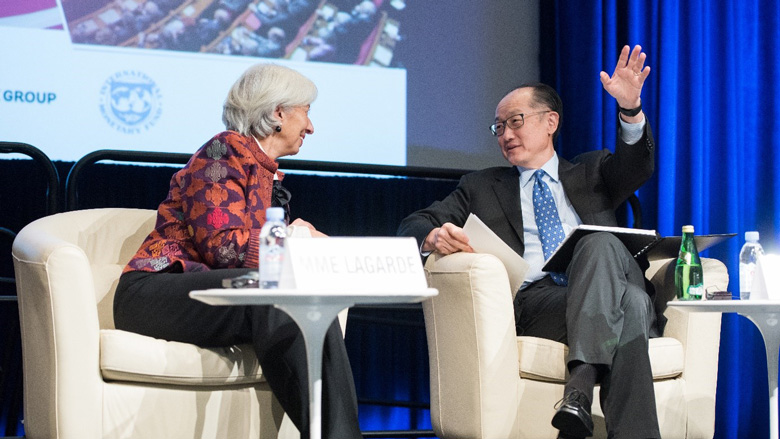 IMF Managing Director Christine Lagarde and World Bank President Jim Yong Kim addressed Parliamentarians at the 2018 Global Parliamentary Conference, emphasizing that by implementing the right legislation, they have the power to bring about positive change.

Washington DC, April 17, 2018 – Over 200 participants from 61 countries attended the 2018 Global Parliamentary Conference on April 16-17, where they had the opportunity to discuss pressing global concerns directly with the World Bank President Jim Yong Kim and IMF Managing Director Christine Lagarde.

The event, organized jointly with the World Bank Group and the IMF, has become an important milestone at the Spring Meetings. It offers parliamentarians a platform to engage with World Bank Group and IMF senior management, and advocates for the right legislation to bring about meaningful change in their countries.

Highlighting the imperative need to improve lives by investing in human capital, Dr. Kim stressed that development cannot happen once a country has become rich, and that investing in people needs to happen now with available resources.

The conference also looked at the state of the global economy. According to Mme Lagarde, the current upswing is an opportunity to increase growth potential and implement structural reforms. She went on to say that it is important to communicate the necessity of reforms, and that the IMF is available to help legislators make the case.

This year’s event included a special half-day Parliamentary session on youth job creation, a topic Parliamentary Network Chair Jeremy Lefroy MP, UK, has been pushing to the forefront of the Network’s mission. He described unemployment as a disease among the young and urged his fellow parliamentarians to take action and implement much-needed programs to combat youth unemployment in their counties.

Opening the Parliamentary session, World Bank CEO Kristalina Georgieva noted that today's generations live in a rapidly changing world, and we need multifaceted approaches to cope with this speed of change. A high-level panel of employment experts followed, including Melanie Robinson, Executive Director for the United Kingdom, World Bank Group; Kevin Jacobs, Executive Vice President and Chief Financial Officer, Hilton, as well as youth entrepreneurs and economists who took the time to listen to legislators’ feedback on what constitutes successful employment policies.

Following the conference, the mission of attending parliamentarians will be to implement the resulting action plan focusing on legislation to support the creation of sustainable employment for young people through essential measures such as youth budgeting and facilitating access to finance for entrepreneurs.