The Architect of the Modern Bond Market 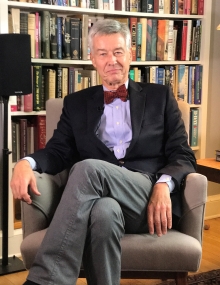 On the wall in Ken Lay’s study in his home in upper N.W. DC, hangs a framed tombstone of the first Global Bond.

“Yes, it was viewed as a big deal,” says Lay, looking at the printed reminder of the historic USD 1.5bn 10-year issue launched in 1989, which made his name synonymous with the word “innovation”.

This deal did more than any other to break down barriers to capital flows and pave the way for the boom in issuance that followed in the 1990s. So much so that in 2010, as he was leaving his position as vice president and treasurer of the World Bank, where Lay has worked for 28 years, the magazine Global Capital called him “the architect of the modern bond market”.

When he finally was appointed as the Treasurer in 2006, the role of capital markets in financing strategic sectors in the developing world was much different than the one he found when joining the Bank in 1982.

“It wasn't that long ago that the institutional investment was still in its formative stages. For example, the states had legal lists of the securities that their pension funds could buy and I can recall early in my career traveling around the United States to talk to regulators and get the states to go ahead, and put World Bank bonds on their legal list alongside federal agencies,” recalls Lay.

His experience runs the gamut from advocating for removing inefficiencies of the market to monitoring the health of countries’ banking and capital markets to developing the concepts that now are conventional, such as global and green bonds. Lay could talk for hours about the extraordinary transformations that happened in the capital markets since the first World Bank bond was issued in 1947. But when Gene Rotberg, then Treasurer, asked Lay to join the World Bank in the early ‘80s, his response was “I don’t know finance.”

The future “architect of the modern bond market” honestly did not think he qualified to work at the Treasury.

“It surprises me when I think about the fact that I ended up working at the World Bank,” said Lay with a smile when we caught up with him recently at his home.

His major at Dartmouth College had nothing to do with finance or economics. Instead it was English Medieval History. For graduate school he chose to follow in his father’s footsteps and go to law school. Lay received his JD from George Washington University and started working at the U.S. Securities and Exchange Commission. That’s where Rotberg recruited this young, brilliant mind who eventually pioneered the global bonds.

"I made the point because, I think, the key thing in Treasury – and I learned this from Gene Rotberg - is to license the people on the teams to think outside the box, and to bring forward the new ideas with the understanding that there are going to be many of them that aren't going to work, but the ones that do can have a huge impact"
Ken Lay
Former World Bank Treasurer, 2006-2010 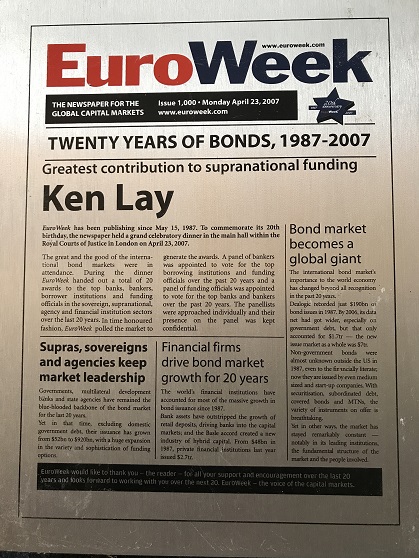 “I'm mindful of the fact that everybody now takes the global bond for granted, but that was hugely controversial at the time because of the changes in nitty-gritty stuff like clearing and settlement that you needed to implement to make that work.  I made the point because, I think, the key thing in Treasury – and I learned this from Gene Rotberg - is to license the people on the teams to think outside the box, and to bring forward the new ideas with the understanding that there are going to be many of them that aren't going to work, but the ones that do can have a huge impact,” says Lay.

Soon after he became the Treasurer in 2006, the world faced its most severe economic crisis in recent memory. Private capital flows to developing countries fell rapidly, from a peak of around USD 1.2 trillion in 2007 to an estimated USD 363 billion in 2009—opening a substantial financing gap.

The scale and breadth of the global financial crisis took the entire development community, including the World Bank Group, by surprise. But the Bank mobilized itself quickly.

“We ultimately had to step up and produce a lot of crisis-related finance for our clients,” says Lay.

“It’s actually absolutely fascinating how it was that the Bank came through the crisis so well. It was a testament to the longstanding conservative policies on both the funding and the asset side. The markets were effectively shut down, and we still needed to go forward with transactions. In 2008, we were reporting an 8% return for our clients when everybody in the markets had lost hugely.”

According to Lay, it was crucial that the incentive structure, under which the Treasury team operated, not be skewed toward excessive risk-taking in a way that would keep the Bank in highly exposed positions even when the vulnerabilities had become evident.  When the U.S. Congress sent a team of congressional staffers to learn about how the Bank posted such impressive results compared to other institutions during the crisis, Lay explained to them: “Well, we pay them like bureaucrats.”

The financial crisis did not stop the Treasury from innovating. In 2008, the first ever World Bank Green Bond was developed in close collaboration with SEB to respond to specific investor demands for a triple-A rated fixed income product that supports projects addressing climate challenge. In 2009, the Bank became active in the catastrophe bond market when it established the MultiCat Program.

But if you ask Lay about his favorite innovation during his time at the Treasury, he won’t name any of his “best hits.” He will talk instead about building a new business model which allowed the Treasury to become self-funded. In 2001, Lay’s efforts yielded the Reserves Advisory and Management Program (RAMP) that helps countries in their capacity-building efforts and manages their reserves.

“Because of RAMP, until the time I left the Treasury, revenues more than doubled. It gave us the capacity to put money into some very innovative things,” says Lay, who together with World Bank colleagues managed more than USD 100bn in investments.

Lay left the Bank in 2010 with an unmatched reputation for innovation in financial markets. Today, he is still passionate about every innovation that happens at the Treasury. Lay attends all important Treasury events and his presence alone - be it the Pandemic Bond launch in June 2017 or the IDA’s Inaugural Bond Launch this April - is a reminder of his legacy, which the Bank continues to build on every day.