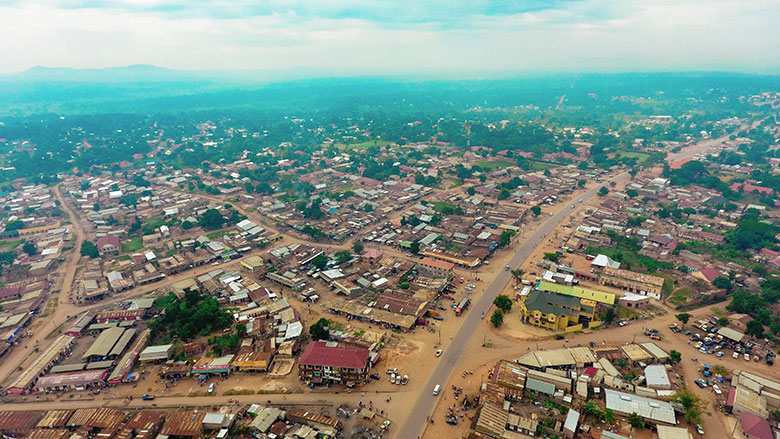 Land administration reforms aim to increase land titling and surveying and to ensure records are secure, verifiable, and accessible.

Increasing security of land tenure by digitizing ownership records, such as title deeds and leases, goes a long way toward boosting local and foreign investor confidence. Uganda has digitized its land registry—a manual system since 1908—reducing the time to access records from 435 days to mere moments.
"Now I am at peace because I know that our land titles exist in the system and my land is safe."
Justine Namayanja
Landowner in Masaka district

When Justine Namayanja first heard a radio announcement for the trial run of a new system for tracking land titles, she dismissed it. Ever since her husband’s death five years earlier, she had been trying to verify her land titles to avoid becoming a victim of the land-grabbing incidents occurring in her village. When she heard the announcement again—calling people to try the new system out at a World Bank Open Day Bazaar in her home district of Masaka, south of Kampala, she decided to go.

The process was easy and instantaneous. “Now I am at peace because I know that our land titles exist in the system and my land is safe,” she says.

Namayanja thought it would be expensive to check on her land titles, involving a journey to the Ugandan capital, Kampala, and a hunt for the right officials once there. That may have been the case in 2006, when it took an average of 435 days to access land records, but not anymore.

Officials at the Open Day Bazaar helped her find her titles using the new Land Information System, a mapping software designed for the registration and administration of land. “The system they brought here was very efficient,” Namayanja says.

The Land Information System is the cornerstone of Uganda’s land administration reform. It has digitized a registry that had been manual since its inception in 1908. Just 18 percent of Uganda’s land mass had been registered by the time the digitization process began in 2013.

The push to modernize the complex systems and procedures that govern land ownership in Uganda is part of the World Bank’s Competitiveness and Enterprise Development Project. It is being financed with $100 million from IDA, and implemented by Uganda’s Ministry of Lands, Housing, and Urban Development.

Uganda ranked 120 out of 185 economies in the World Bank’s “Doing Business” report (2013), in large part due to poor land governance. Since then, the Ministry of Lands has built 10 offices outside Kampala and digitized some 600,000 land titles.

“All land that is titled and surveyed is online,” says Moses Kibirige, who works with the World Bank’s Trade and Competitiveness sector in Uganda. “We’ve still got 80 percent to go, which we’re working on now.”

Kibirige emphasizes the long-term nature of land reform, with having to incorporate the different land tenure systems laid out in Uganda’s Land Act (1998): customary tenure, freehold, mailo, and leasehold. In northern and eastern Uganda, land is often held communally. The project encourages communal land associations to form. So far, 200 have formed, with a target of 600 for 2018.

Registering the sale or purchase of a property now takes 30 days, down from 52 in 2013. Easier public access to verifiable data is helping to provide banks and courts of law with credible information that can help solve land ownership disputes.