Why Trade, Investment, and Competition Reforms Matter for Argentina 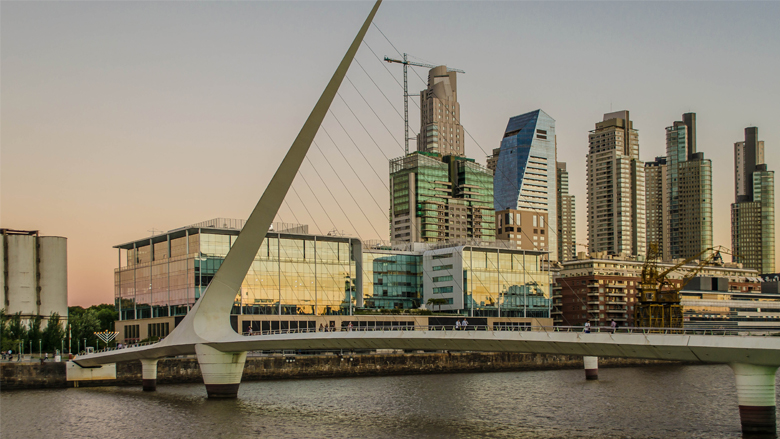 WASHINGTON, April 18, 2018 - A loaf of bread. A gallon of milk. Eggs, cheese, and chicken. Most people would not link these everyday staples with a country’s integration in the global economy. But in Argentina, where customers pay 49% more, on average, for these groceries than people would have to under similar conditions in OECD countries, higher food prices are a symptom of deeper economic issues.

The country faces challenges in three policy areas that reinforce each other in fostering further integration in the global economy: trade, investment, and competition. Argentina’s trade flows have fallen by almost half over the past fifteen years, and while most countries participate in about 14 free trade agreements each, Argentina is only party to one, Mercosur. Foreign direct investment levels are low in Argentina, amounting to just two percent of GDP between 2000 and 2015. Further, state-owned enterprises in 17 different sectors are not competing on a level playing field with private investors or delivering services less efficiently than the private sector could.

A report from The World Bank Group, Strengthening Argentina’s Integration in the Global Economy: Policy Proposals for Trade, Investment and Competition, analyzes the current state of affairs in these three policy areas and proposes reforms designed to boost integration with the global markets which would then provide opportunities to grow, create welfare for consumers, and generate better employment opportunities. The reforms suggested in the report cover a wide range and include recommendations such as lowering tariffs, removing bureaucratic hurdles that make private sector investments difficult, and strengthening anti-cartel enforcement, among others. Enacting these reforms would allow firms to be more competitive and better integrated into the global economy, the report finds.

Implementing economy-wide reforms will pay off in a variety of ways. For instance, with all else being equal, a more integrated Mercosur- with lower external tariffs and streamlined internal non-tariff measures – would expand Argentina’s GDP by at least 1%over baseline projections for 2030. Increasing competition in the manufacturing sector would add 7 percent to annual growth labor productivity. Reducing the restrictiveness of market regulation in Argentinian services sectors (such as energy, transport, professional services, and telecommunications) would translate into an additional 0.1 percent to 0.6 percent growth in annual GDP.

Argentina’s government recognizes these opportunities and is taking active steps to open its markets. The Macri administration, which took office in 2015, has already reduced export taxes, replaced the import licensing system, approved reductions in energy and transport subsidies, pushed for a new Competition Law and facilitated $102 billion in new future investments in just 24 months.

"We are convinced that to defeat poverty, Argentina needs a profound productive transformation to become a developed country," said Miguel Braun, Secretario de Comercio de la Nación, at an event in December 2017.

To reap the benefits of an open economy and increase prosperity in Argentina, the World Bank Group suggests tackling reforms across all three policy areas simultaneously, prioritizing those that can offer short-term wins and tangible benefits.

“No one policy alone ensures that firms can integrate into the global economy,” explains Martha Martinez-Licetti, Lead Economist in the World Bank Group’s Macroeconomics, Trade & Investment Global Practice and Lead Author of the report. “More must be done to ensure that everyone shares fully in the benefits of trade. Policies that help all people benefit from the opportunities that come with trade include investment and competition policies. It is only when implemented in a coherent way that reforms to trade, investment and competition can bring positive effects for the economy as a whole, better jobs for Argentine people, and more variety of goods and services at lower prices for consumers.”

"No one policy alone ensures that firms can integrate into the global economy"
Martha Martinez-Licetti
Lead Economist in the World Bank Group’s Macroeconomics, Trade & Investment Global Practice and Lead Author of the report 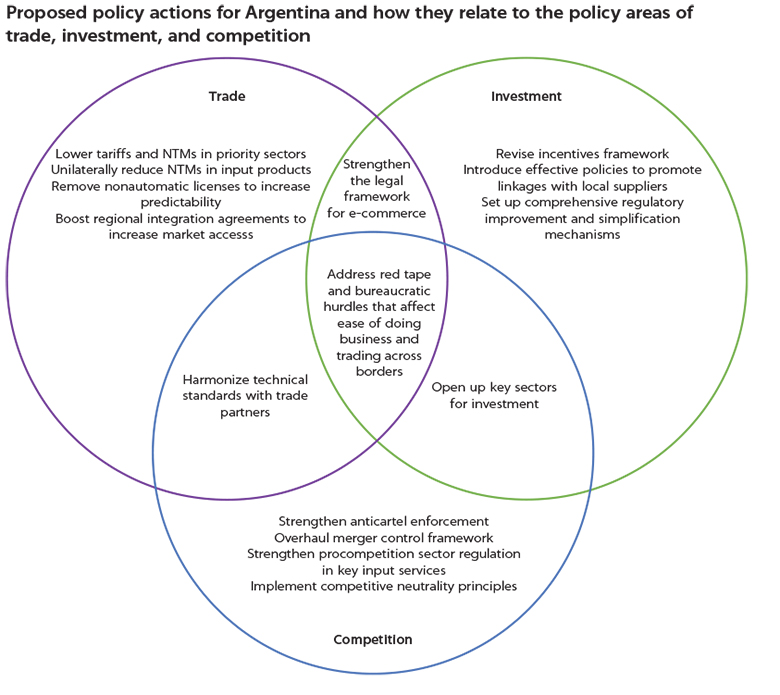 The reforms suggested by the World Bank Group aim to address four particular challenges that firms in Argentina face.

In the past, government interventions prevented investment from expanding or thriving. But today, Argentina is looking to the future and building policies that will help it reintegrate into the world economy.

"Even in this turbulence that we are experiencing, there is an opportunity to intelligently join the world," said Argentina’s Minister of Production, Francisco Cabrera. “This report is an analytical anchor to understand where we are standing and to be able to make decisions.”