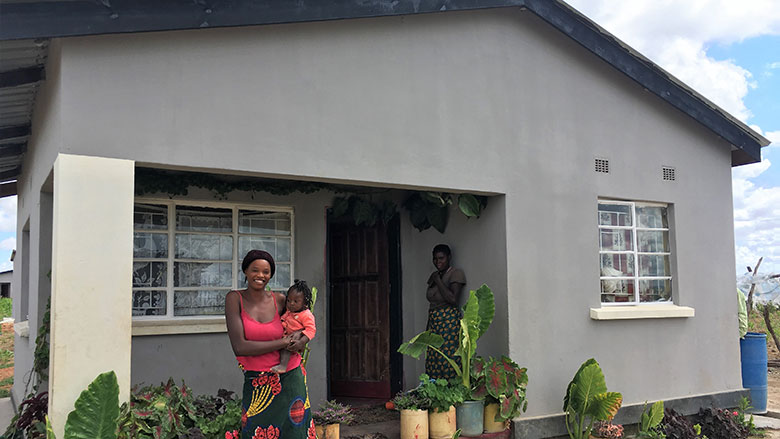 Margaret Kalimina and her family live in a newly-built three-roomed house near a new water borehole in Kalima Village, Chisamba District.

LUSAKA, April 9, 2018- This year marks the first rainy season that Margaret Kalimina will not have to worry about a holey roof in her thatched hut. And soon, the use of intensive means of watering crops and waiting for the rains will be a thing of the past for her and many other households in the villages of Hankwa, Malama, Toba and Kalima in Mwomboshi area of Chisamba District.

Kalimina is one of several households relocated by the government, away from the Mwomboshi River to pave way for the construction of a dam and setting up of irrigation schemes. Supported through the World Bank-funded Irrigation Development and Support Project, this will help small scale farmers increase yields per hectare, and enable year-round crop production.

“We will be given a hectare of irrigated land per household and this will enable us to engage into farming throughout the year without worrying about food shortages,” said Kalimina, who now lives in a three-room home with her mother, two sisters and her daughter in Kalima Village.

The dam is part of an overall irrigation project in the country, which includes two additional irrigation schemes; the Lusitu in the Southern Province, and the Musakashi in the Copperbelt Province. With a wall 1,700 meters long and 23 meters high, the Mwomboshi Dam is expected to bring more than 10,000 hectares of land under irrigation when it is at full capacity, making it the largest in the country’s agriculture sector.

“The people of Mwomboshi will benefit immeasurably from this project as they will not only be able to irrigate their crops and have pasture throughout the year, but will also have access to water for their livestock and fisheries,” said Ina Marlene-Ruthenberg, World Bank country manager for Zambia.

For much of their lives, the people of this area have relied on the Mwomboshi river as a daily source of water for washing, cooking, drinking, as well as small-scale fishing. Maize farming is the chief source of income in Mwomboshi, where more than 90% of the people who live there are farmers. Kalimina’s new house stands nearby one of the newly-installed hand pumps that she is sharing with three other households for all their domestics uses.

“The government is also encouraging us to reduce on maize-oriented agriculture and try new food crops such as wheat, butternut and sweet corn,” Kalimina said.

The project irrigation scheme has been divided into four tiers. The first one will be allocated to small scale farmers, such as Kalimina. The second tier will be specifically for co-operatives, which includes benefits such as access to government-subsidized farming inputs. The third and fourth tiers will be exclusive to commercial and large-scale farming.

When the project becomes operational, 338 households will have been relocated.