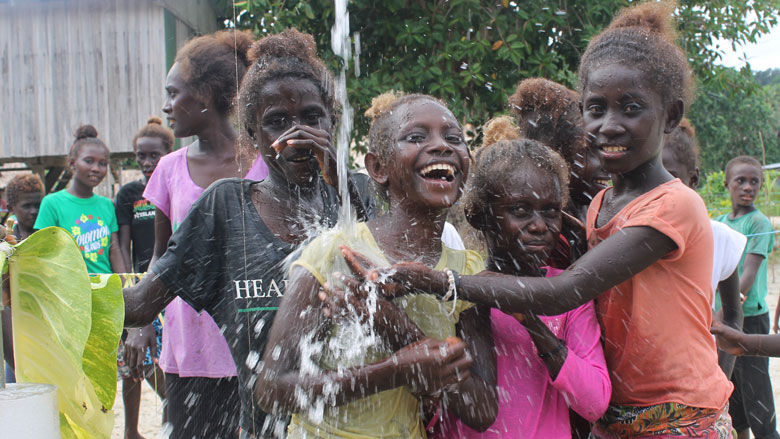 Choiseul, Solomon Islands, 19 March 2018 – Considering that 98% of Solomon Islands’ total surface area is covered with water, it can be hard to comprehend just how little fresh water the country has. Communities like Vudutaru, in northwest Choiseul, and Lokalaji, in the province’s south, were all too familiar with problems associated with a lack of fresh water.

Both communities had their water supply infrastructure destroyed by a 2007 earthquake and tsunami, and for the last 10 years people within these communities have had to travel several kilometers inland each day to collect fresh water.

This led to health problems that had profound impacts on young children, some of which contracted diarrhea or dysentery after drinking unsafe water and missed school as a result.

A lack of water is about a lot more than thirst

The absence of a water source also led to other challenges: family disputes arose between children and their parents over the responsibility to fetch water, and – as is all too common across the world – women and children bore the brunt of this burden; placing their safety at risk as they walked far into the hills and bushes to collect water.

Yet, for many children in Choiseul, this is normal. For those born after 2007, the long, arduous walk to lug water back from the nearest source was simply a way of life.

After the 2007 tsunami hit the Vudutaru community, mother of six Mary Vaebatu saw life get harder.

“In the evening, when the women returned home from gardening, there was always one more task to do before nighttime: collecting drinking water for the family,” Mary said. “Sometimes we would go to nearby villages to get clean water from that village’s water sources; leading to tensions and arguments. Yet because we were desperate for water, we had no fear.”

In 2015, life changed for the better in these communities. The people of Vudutaru and Lokalaji sought support to build new water supply and water catchment systems with funding from the World Bank-supported Rural Development Program. Through this project, the people of both communities purchased new water tanks – including one that holds 3,000 liters of water from a source in the hills above, supplying standpipes near homes in each community.

Mary Vaebatu says everyone living in both communities contributed where they could to these projects.

“The work was hard. It involved carrying sand, gravel and sawn timber to the water source. There we built a small dam that supplies water to the village. Sometimes we would work from morning to sundown. We were tired, but because we needed clean water, we labored on until the work was done,” she said.

In June 2017, a ceremony was held to mark the new water systems’ completion; and the end of the long ‘water walk’.

“2017 was a special year for the women of Vudutaru community. We are very happy that we no longer go far to collect drinking water – all our water needs are met and we have a renewed sense of hope for the future,” said Mary.

“Now, when children come home from school, they have more daylight hours to do what children should do, and that is play and have fun. They also have time to do their homework, and of course help their parents but they don’t have to walk two hours into the hill to fetch water anymore,” said Lucia.

To date, the project has supported the completion of 11 water projects in Choiseul Province alone, brining fresh, clean water to over 2,400 people in the remote province.

Since it began in 2008, the Rural Development Program, funded by the World Bank, together with the Australian Government, the European Union and the International Fund for Agriculture Development  has been focused on projects developed by communities for communities, and currently reaches 90% of Solomon Islands’ rural areas.

The project has provided support for community infrastructure projects including health clinics, classrooms and housing for teachers and health officers, footbridges and water supply and catchment projects across Solomon Islands.