Skip to Main Navigation
This page in:_
FEATURE STORY March 15, 2018 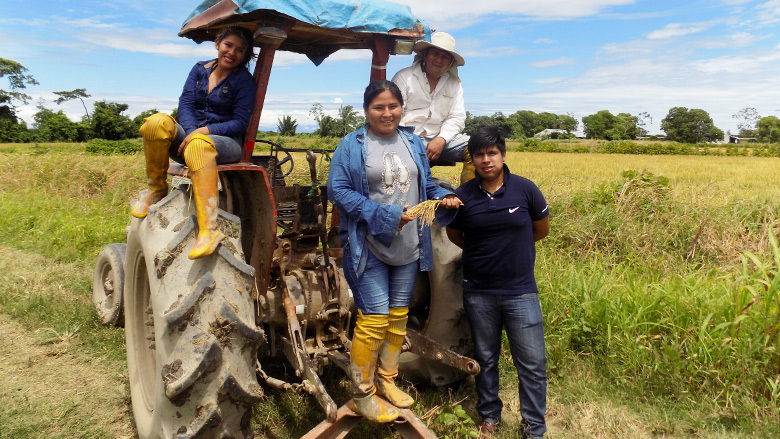 Researchers from the National Institute of Agricultural and Forestry Innovation (INIAF) and farmers from Bolivia.

Yapacaní, in Santa Cruz-Bolivia, is home to hundreds of farming families. The extensive fields of rice, corn, yucca, potatoes and bananas show that in this community the agricultural activity is intense.

The farmers are familiar with the work of the National Institute for Agricultural and Forestry Innovation (INIAF), that was supported by the World Bank for five years, through the Innovation and Agricultural Services Project - PISA, completed in February 2017.

The project played a central role to improve the production yield and to deal with pests, diseases and climate impacts that affect crops and, subsequently, the farmers' income.

"We participated in events in which the technicians taught us new methods to prepare the land and store water. In addition, the use of seeds certified by INIAF has really helped us to improve our production", says Segundo Maldonado, a rice farmer.

In fact, the seed strengthening certification system was one of the most successful components of the project. The use of certified seeds increased the yield and productivity of crops nationwide by more than 40 percent and, along with other scientific innovations, contributed to fighting pests since they were developed with tolerance to pathogens that diminish the productivity in the sector.

The volume of certification increased from 78,691 tons in 2011 to 119,124 tons in 2015. Since 2012, the certification has been extended from 210 to 284 varieties including fruits and medicinal plants and, during the five years of project activity, certified seedlings have gone from one million to 10 million. Today it is estimated that more than 50 percent of the agricultural area in Bolivia uses certified seed.

The INIAF certification services reached about 4,500 producers and 300 seed associations annually, which represents benefits for more than 14,000 families in the rural area.

Yapacaní is just one example of the scope of PISA. At a national level, the wheat and rice research programs that INIAF developed, in partnership with international centers, managed to introduce 10,000 genotypes that have been adapted by local researchers to different production contexts. Producers increased crop yields by 100 percent. This is an impressive result.

It is expected that in the following years these new varieties will replace a significant percentage of the area under cultivation in the country, generating a significant increase in value. The challenge now is to disseminate these technologies quickly.

INIAF also assumed a leading role in the project to train and technically assist farmers. Since its inception, the entity advised 193 municipalities and 1,505 communities in the nine departments of the country, reaching about 36,336 beneficiaries, of which 34 percent were women.

Francisco Obreque, agriculture specialist at the World Bank in Bolivia and manager of the project considers this work “strengthened the capacity of producers to adapt to climate change and increased productivity in strategic areas, through partnerships with multiple actors".

“One year after the end of the PISA, INIAF has the capacity to articulate the National System of Agricultural and Forestry Innovation (SNIAF) and develop research that allows the generation of agricultural and forestry technology to improve the productivity of the sector”, said Carlos Osinaga, general executive director of INIAF.

There are other goals achieved in these five years:

Key learnings of the project

The first lesson is that the needs for innovation should be identified in a participatory process (from the bottom up). By the other side, building alliances with producer organizations, research institutes, universities, NGOs and private companies leads public agencies to improve their capacity to promote the adoption of innovations. Finally, the collaboration between co-financiers - in this case, the World Bank, DANIDA and COSUDE - add value to the projects in terms of greater availability of resources and complementation of technical support.

The PISA project contributed to the growth of productivity, sustainable rural development, and the improvement of the income of thousands of families that depend on agriculture and forestry activities. Segundo Maldonado in Yapacaní is one of the 30,000 producers that benefited from its implementation.