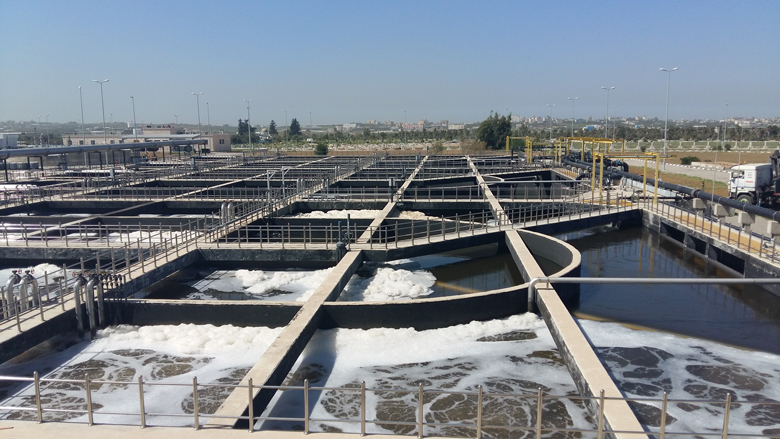 The long-awaited construction of the new North Gaza Wastewater Treatment Plant is now complete and ready for operation. It will provide a long-term, sustainable wastewater management solution for over 400,000 Gazan citizens.

For years, the Gaza population has endured an environmental disaster due to sewage pollution. Despite the extremely volatile environment, the long-awaited construction of the new North Gaza Wastewater Treatment Plant is now complete and ready for operation. It will provide a long-term, sustainable wastewater management solution for over 400,000 Gazan citizens.

The commissioning of the new wastewater treatment plant was launched on March 1, 2018, as the World Bank project, the North Gaza Emergency Sewage Treatment (NGEST) neared completion. The four-month commissioning phase began following the conclusion of all works by the contractor, and the testing of equipment installed in the new facility. At the request of the Palestinian Authority, the owner of the new project, the World Bank will extend its support throughout the commissioning period, as the plant is gradually brought to full operation at the end of June of this year.

The plant has a long history. It was the cause of several incidents that led to catastrophic humanitarian, health, and environmental consequences. The most disastrous was the March 2007 collapse of the Beit Lahia sewage lakes that flooded the nearby village of Um Al Nasser, killing five, causing countless injuries, and displacing approximately 2,000 people. Additionally, the aging and inefficient sewage treatment system continually contaminated the groundwater, putting all residents at risk. There was a desperate need for immediate action. The World Bank-financed project addressed the immediate threat to communities living adjacent to the lakes (52,000 inhabitants).

The project faced numerous challenges, including years of blockade, restrictions on the entry of critical materials and equipment, damages from war and conflict to existing infrastructure, and suspension of works due to hostilities. Despite the challenges, the US$75million project moved from an emergency intervention to a longer-term solution. The external factors were significantly daunting, however due to the strong leadership of the Palestinian Water Authority (PWA) and the determined support from the donor community the construction of NGEST proceeded.

The treatment facility requires sufficient power to operate, which is not consistently available due to the Gaza electricity crisis. In fact, the crisis of the entire Gaza sewage was aggravated by the lack of sufficient power. The raw wastewater has no border,  and both seeped into the groundwater and flowed into  the Mediterranean Sea. Not only is Gaza’s entire coast severely polluted, but sewage has reached the Israeli beaches (e.g. Ashkelon and Sderot).

In the interest of all, the Palestinian Authority and the Government of Israel have finally agreed to some temporary power arrangements for NGEST. However, it needs a dedicated electricity line built from Israel straight to the plant to achieve long-term viability of sewage treatment operations. While Israel has approved the long-awaited request for the power line, the plan has yet to be implemented.

During the next two months, the PWA needs to reach an agreement with relevant stakeholders to delegate the operation and maintenance of NGEST to the Gaza Coastal Municipalities Water Utility (CMWU), as the utility operator in Gaza. Moreover, the Palestinian stakeholders need to reach an agreement on financing the cost of operating NGEST including cost recovery measures.

*The project received financial and technical support from the governments of Belgium, France, and Sweden, the European Commission, and the World Bank. Additionally, the Office of the Quartet Representative and the US State Department have provided support to coordinate the entry to Gaza of goods and services for the project.