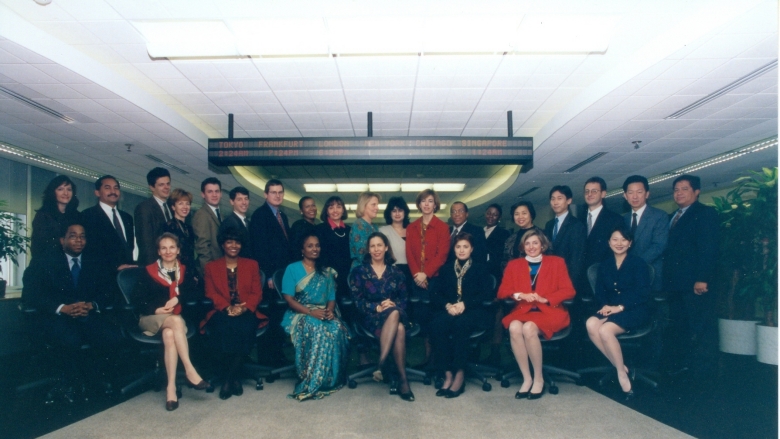 On December 31, 1999, World Bank Treasurer Afsaneh Beschloss and her team anxiously awaited the turn of the century, not knowing if the dreaded Y2K bug would strike. Was the technology equipped to handle the transition to the year 2000, or would it wreak havoc on computer systems worldwide?

“I don’t think a lot of people remember it, but in the Bank, we were really worried that the systems wouldn’t work, given that they were not set up to deal with 2-0-0-0. Once we got into the New Year and nothing went wrong, I can’t tell you the sigh of relief,” says Afsaneh. 18 years later, she still smiles as she reflects on this momentous time in the history of the Treasury.

Iranian-born Afsaneh headed the World Bank Treasury after working at the Bank in multiple roles, including overseeing $95 billion as CIO from 1996 through 1999. She began her finance career at J.P. Morgan in London and New York, after earning a Master’s degree in Economics with Honors from the University of Oxford in 1978.  Her original plan to return to Iran, where she grew up, was dashed after the 1979 Islamic revolution shook the world - and Afsaneh’ s career path.

“While my original plan had been to go back to Iran that was no longer an option, especially for a woman post 1979, anyways.”

Afsaneh’ s years as Treasurer were marked by a different kind of ‘digital revolution’, with several groundbreaking innovations.

“I think this time was really interesting when it came to technology.”

To kick start the new millennium, the World Bank Treasury issued the first fully integrated electronic bond (“E-bond”) in January 2000. This US$3 billion five-year issue was the first bond to be offered globally via online platforms. For investors, this internet bond was revolutionary. Until then, this type of product had only been available to institutional investors. Now mid-size and retail investors could access this market information.

The global notes surpassed expectations. By 8am, Washington time, on the issue day, the order book had exceeded $5 billion. Of that, $1.7 billion of orders came via the internet.

At the time E-bonds were among the most pioneering, cutting-edge financial products on offer.

"The Treasury was both entrepreneurial and innovative - able to work with the Street and with technology firms in coming up with the idea of the first E-bond. It was very successful."
Afsaneh Beschloss
World Bank VP and Treasurer, 1999-2001 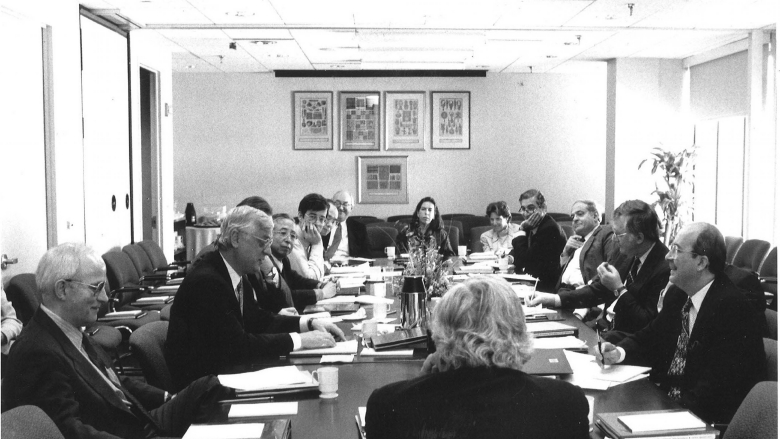 Nowadays we take investor relations for granted. If we rewind 20 years, investor websites, dedicated emails and IR departments did not really exist in the way they do today. Establishing investor relations teams and using technology was a key milestone during Afsaneh’ s tenure as Treasurer.

To coincide with the launch of the E-bond, the World Bank Treasury launched a new debt securities website.

“At that point we obviously didn’t have smartphones but internet use was increasing. Whatever new tools became available, we were early adopters. Back then it seemed quite complicated getting all the information from the various investors in order to see how they were lining up to buy our bonds, and using that information to price the bonds competitively. Technology helped us to reduce our borrowing costs more than others,” says Afsaneh, who was known for her creativity and innovative approach to capital markets before she became Treasurer.

In 1998, The New York Times called her “one of the brightest stars in the field”.

During her two decades at the World Bank, Afsaneh worked in multiple roles. As the Treasurer she was responsible for investment strategy and for investing the Bank's $65 billion of assets. In addition, she directed the Bank's $30 billion funding strategy and operations; managed the asset and liability of its balance sheet; and provided financial and technical assistance to member countries, central banks, and institutions.

“The World Bank is such a unique place. I was very fortunate to work at the Bank both as a young person and later in my career” says Afsaneh. She adds that it is important always to remember what it’s all about and to put our beneficiaries at the center of everything we do. Of her time working with young girls and women in the health sector in Senegal to make society more productive, she concludes: “Being mission-oriented and fighting for your ideas is really what makes this job so worthwhile”.

Written and Video by: Rita Stankeviciute