Agriculture plays a vital role in economic growth and poverty reduction in Tajikistan, employing more than half the population and accounting for about a quarter of the country’s GDP. Income from agricultural production is the largest source of income for the poorest rural households.

Agricultural productivity and competitiveness are far below potential, however, despite the reforms over the past decade. Labor income from agriculture remains low, and the country continues to face food insecurity: nearly 70% of domestic food demand is met through imports every year.

Arable land in Tajikistan is highly dependent on irrigation. Yet, the irrigation sector poses the most immediate constraint to farmers in their efforts to increase crop production or shift to higher-value crops. A deteriorating drainage infrastructure, an unreliable electricity supply, and outdated pumping equipment are the main causes of inefficiency in the sector.

With the overall goal of improving food security for Tajikistan’s most vulnerable communities, the World Bank launched in 2013 the Second Public Employment for Sustainable Agriculture and Water Resources Management Project which specifically addresses critical issues in irrigation and water resource management.

As part of the project, a public works program offers income earning opportunities for the poorest citizens, through work that involves manual cleaning of secondary and tertiary irrigation canals. As such, local farmers can gain better access to irrigation, increase their crop yields, and earn much-needed income. 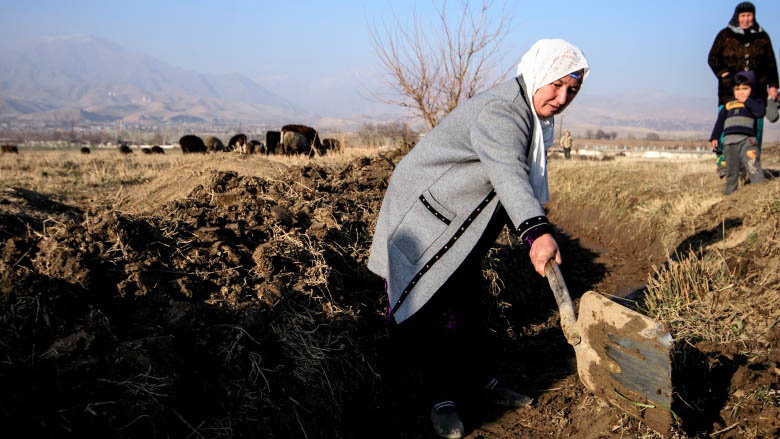 Rozigul Yusupova of Lolazor village is cleaning an irrigation canal.

Rozigul Yusupova lives in Lolazor village, Vahdat District. Her village of 120 households now has enough water to irrigate crops, thanks to the project.

“We used to fight for water. Some neighbors would divert water, as not enough was coming to the village,” says Rozigul. “We came together as a community and jointly resolved the most pressing issue we were facing – the lack of water.”

Thanks to the project, 6,525 km of an on-farm irrigation network have been manually cleaned, which created income opportunities for almost 24,000 citizens. In addition, irrigation and drainage services have been improved on almost 190,000 ha of arable land.

The public works program is implemented in close partnership with local civil society organizations, who ensure that the program targets the most food-insecure people – especially women, who make up more than half the agricultural workforce.

Bobonazar Yatimov manages several greenhouses and employs eight people in Vahdat District. He says that underground water has seriously impacted soil quality, and as a consequence, productivity. “This year, with rehabilitation of the drainage infrastructure, the situation is improving,” says Bobonazar. “It means a lot in terms of the quality and quantity of vegetables we are growing.” 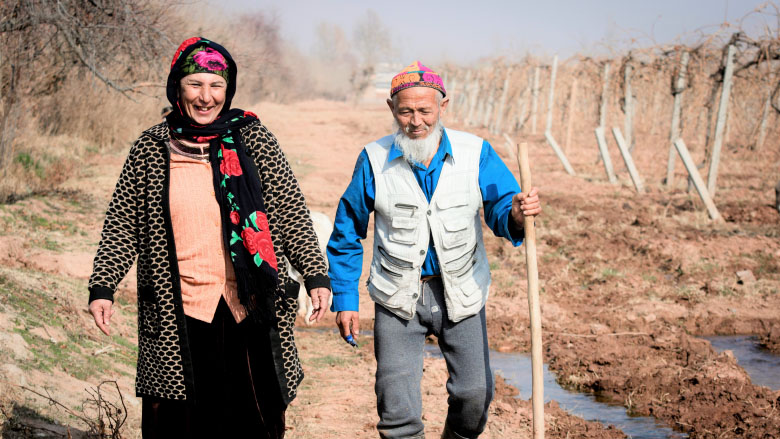 Kurbonoi Alieva (left) is farming at one of the Hissor District vineyards.

The Hissor District of Tajikistan is well known for its vineyards, as well as vegetables and beans. Kurbonoi Alieva has worked on the land all her life and remembers the times when all her family was able to make enough income through farming. But over past decade, she and her sons were forced to go to Russia for seasonal work. “Water was a serious problem. We could not get good crops anymore,” says Kurbonoi.

“This is now the second year that I can grow grapes, corn and wheat grain,” adds Kurbonoi. “It is a huge support for our family of eight people. If there is enough water, there is no need to go to Russia. Water means work!” 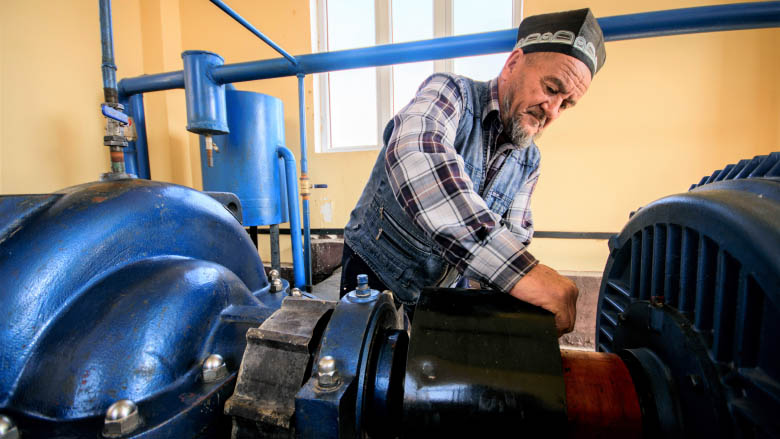 Abdurauf Azizov manages the Chanori Sukhta pumping station in Hissor. Built in 1970, the station was not renovated for twenty years, after the dissolution of the Soviet Union. “The pumping station was in a critical condition,” says Abdurauf. “We could not find money to buy parts to keep it operational.” The project helped rehabilitate the pumping station in 2017, along with two other stations which now supply irrigation water to 700 ha of land. 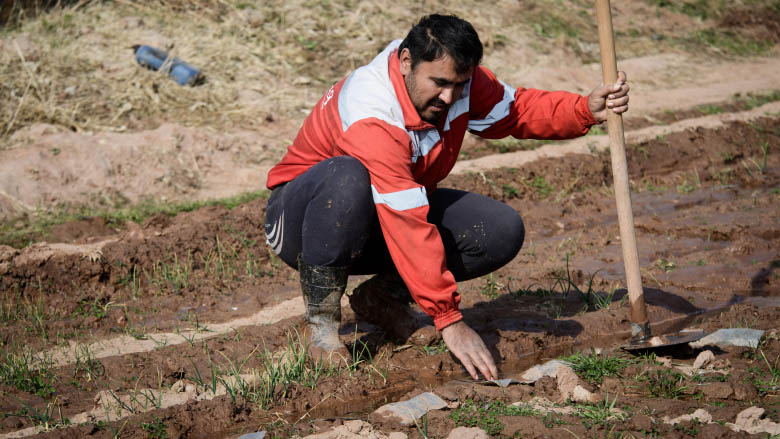 A farmer in Hissor irrigating his field.

Safar Omonov is a farmer in Hissor. He is also a member of the local Water Users Association, which was established two years ago with support from the project.

“This year, I planted wheat grain for the first harvest and then I also got good rice, beans and corn crops for the second harvest,” says Safar. “If there is water, not a single square meter of land remains unused.”

“Apart from trying to bring additional income to the country’s poorest regions and improving food security, the project is also working on important institutional reforms,” says Bobojon Yatimov, task team leader for the project, based in Dushanbe. “It is important to create an efficient and viable water resource management system in Tajikistan, which will provide better irrigation services to farmers, reduce cost of irrigation inefficiencies and make rural economies prosper, in a sustainable way.”