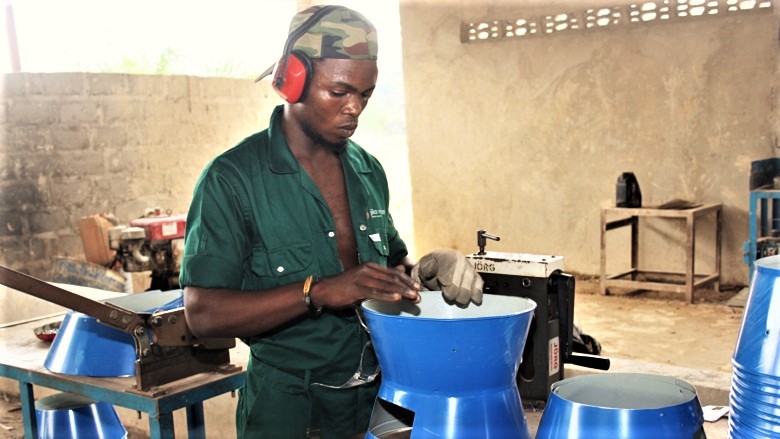 A year ago, 51-year old grandmother Janine Nyota-Nguburu traded in her traditional cookstove, about the size of a large metal lantern, for an energy-efficient version that she bought just around the corner from her small urban farmhouse in Kinshasa. The ceramic center of Janine’s new cookstove does a better job of harnessing radiant heat and reduces the amount of charcoal she needs to burn to prepare her signature fried beans. This also means a 70-kg bag of charcoal that costs about $20 now lasts her two months instead of two weeks.

But it’s not just the money she’s saving that has her breathing a little easier.

“My kitchen was always too hot, and the smoke from burning so much charcoal over many hours each day would burn our eyes and give us lung problems,” said Janine.

Cooking is now cheaper and safer in Janine’s kitchen, but according to the Congolese Alliance for Improved Cookstoves (ACFCA in French), only about 4% of households in Kinshasa use an energy efficient version. Families either don’t know they exist or they can’t afford one--traditional cookstoves cost about $2, whereas improved cookstoves can cost anywhere between $8 and $70.

With over 10 million people in Kinshasa, traditional cookstoves in the capital have a very real and direct impact on deforestation in the country.  Charcoal is preferred over burning wood because it provides a slower, somewhat cleaner burn. But charcoal production is very wasteful. It takes about 6 kg of wood to produce 1 kg of charcoal, and at every stage of production and transport, more waste occurs. What’s more, fuelwood is usually sourced unsustainably from natural forests, creating vast, degraded areas around Kinshasa and other urban centers.

In an effort to protect tropical forests in DRC’s Mai-Ndombe province directly north of Kinshasa, the World Bank is implementing an Improved Forested Landscape Management Project, funded by the Forest Investment Program (FIP). It includes about $2 million to support the production and marketing of energy-efficient cookstoves in Kinshasa. This demand-side approach to reducing the drivers of deforestation complements the project’s parallel supply-side agroforestry activities in Mai-Ndombe’s savannah lands, namely planting trees that grow rapidly for charcoal production in order to take the pressure off the area’s natural forests.

Biso na Bino (BNB) is a Kinshasa-based Congolese company that produces energy-efficient cookstoves, much like the one Janine uses. With support from the FIP project, they have been able to relaunch their industrial production facility. As of today, the company manufactures more than 1,500 cookstoves per month, making them Kinshasa’s largest producer. As production grows, the company saves on fixed costs, which in turn allows them to make the stoves more cheaply and sell them for less.  Prior to FIP’s support, BNB’s smallest cookstove sold for $30. That same model is now available to distributors for $15, though that’s still considerably more than a $2 traditional cookstove. This is why the FIP project has also earmarked funds to support organizations that can help promote the threefold benefits of energy-efficient cookstoves to communities.

“Spending a bit more on an improved cookstove can save money because it burns charcoal more efficiently. They can also improve air quality and reduce pressure on forests for fuel, which in turn helps protect DRC’s natural assets,” said Yvon Mutombo, Executive Director of the Congolese Alliance for Improved Cookstoves. The Alliance is working with BNB and dozens of smaller artisanal cookstove producers to reduce production costs and raise awareness among consumers.

“We need to make energy-efficient cookstoves more popular across the developing world” said Dr. Bernard Ndaye Nkanka, a professor at Kinshasa’s Renewable Energy Research Center (CERERK, in French), the only center in Central Africa that tests and certifies cookstove efficiency. BNB is currently working with CERERK to run comprehensive tests and acquire certifications for its stoves. Dr. Ndaye Nkanka and his team have also participated in knowledge exchanges with several countries, including Honduras, Senegal, Uganda and the United States. He says energy-efficient cookstoves are a small, but important part of the solution in tackling climate change.

While it’s being implemented at the local level, this FIP initiative also supports  DRC’s overall efforts to reduce emissions from deforestation and forest degradation (REDD+), including the large-scale Emission Reductions Program in the Mai-Ndombe province developed under the World Bank’s Forest Carbon Partnership Facility Carbon Fund.