Education Propels a Woman with Albinism Out of Poverty 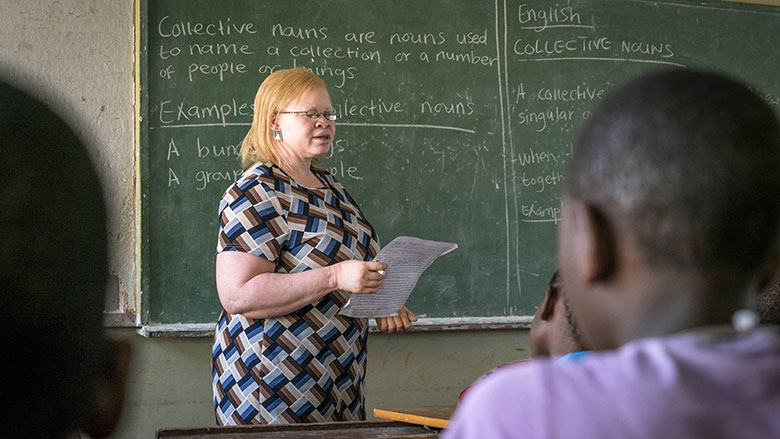 Virginia Chimodzi is a young woman who has used education to fight poverty, and help give her mother a better life.

LILONGWE, December 12, 2017 – Victoria Chimodzi has overcome many challenges in her life. “I am a girl child from a poor family and I have albinism,” she says, confidently. “Just these three factors are strong enough to push me down, but I will not allow that.”

Albinism, a congenital affect characterized by pale skin, hair, and eyes, is not uncommon in many parts of Africa. Its name comes from the Latin albus, meaning quite simply the color "white." A shortage of pigmentation means the tens of thousands of people living in Africa who were born with albinism are especially sensitive to the sun's strong UV rays. This comes out in eye problems, sunburn, and skin cancers.

Though she can't alter the condition she was born with, Virginia has made abject poverty a thing of the past. She attributes her path out of it to education. This she pursued under the guidance and encouragement of her mother, Immaculata—who had to struggle alone to fend for her children (two of whom were born with albinism).

Widowed while expecting her third child, Immaculata worked the fields in her village. Of her childhood, Virginia says: "It was hard growing up in a grass-thatched, mud hut. But now with our savings as teachers, my sister and I have built a brick house for our mother. With our support, she can afford three meals a day."

Her mother could barely manage to give her children two daily meals. “Due to poverty, I could not go beyond primary school [myself],” Immaculata recalls. “But I understood the value of education, so I encouraged my children to still go to school even on an empty tummy. Now I am a very happy woman, I have my children to lean on. My two girls with albinism are qualified teachers.”

Virginia is her second born. She will complete her training as a secondary school teacher in December, qualifying with a Diploma from a Teacher Training College. In 2011, she qualified as a primary school teacher, and was teaching from 2012–2014. “I am still on my highway to success,” says Virginia. On a scale of 1 to 10 she says she is at 4, her quest for higher education yet to be fulfilled. “From primary school ‘til now, I have worked hard to prove that being a poor person with albinism does not mean I am unable,” she says, recalling how she was denied entry to first grade at a faith-based, mission school. At that time, in 1995, she was told to go to a school for the blind. She did not; her mother could not afford the transport money to send her there.

She was admitted later to her local village primary school, and is pleased the government’s policy has since changed to allow people with disabilities to attend the school nearest them. Immaculata is very proud of her daughters. People with albinism are not as useless as others might think, she says. They can also achieve a lot of good things in life. 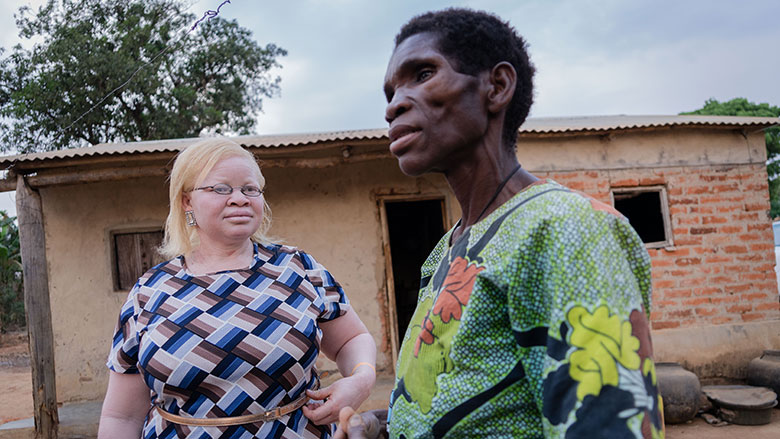 The Association of Persons with Albinism in Malawi (APAM) says People with Albinism (PWA) face the constant threat of physical attack. They are less likely to have an education because of their justified fears, and the lack of safety precautions at schools. Their lack of education leads them toward unemployment or to menial jobs, often outdoors where they are more exposed to the sun and at greater risk of developing skin cancers. Many PWAs in Malawi die of skin cancer before the age of 40. The APAM says most also fall into the 52 percent of Malawians who live in poverty.

Against such odds, back in her village, Virginia is a source of inspiration and motivation for teachers and parents alike on why education is important. “In the last five years, no girl has reached Virginia’s level from this primary school,” said Jeremiah Mzunga, headteacher at the school where Virginia studied. “She is a role model and we need many more girls to go to school if this village is to improve.”

Virginia reminisces about learning under a tree while the community constructed two of the three school blocks with funding from the Malawi Social Action Fund financed by the World Bank.

Many people have albinism

Despite the recognition of her achievements, Virginia is not immune to the fear this brings. “Much as I am trying to improve my economic and social wellbeing as a free citizen, I pretty much live in fear because of attacks on people with my condition. I have lost trust in fellow beings and that is scary,” she says.

APAM has developed a 2017–2022 strategic plan aimed at ending such violations and helping advance the rights of PWAs. In Malawi, and in Tanzania, the World Bank is also helping raise awareness of albinism.