The village of Chook, nestled deep in the Kyrgyz part of the Ferghana Valley, is surrounded by hills and yellow-green strips of cultivated land. A significant number of local people have left for Russia and Kazakhstan, from where they now provide for their families back home. Those who have stayed in the village – like the family of Gulkan and Joldoshbay – grow wheat and cotton on their land plots. 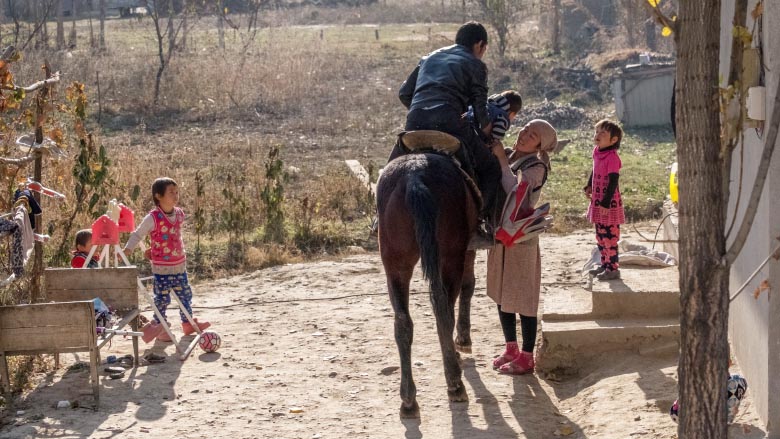 Joldoshbay comes home for lunch. He often takes his toddler son with him to the fields.

Gulkan is a 23-year-old stay-at-home mother of four children, the youngest of whom is just seven months old. Every morning she fetches a bucket or two of water from the nearby irrigation ditch. One of the biggest problems in Chook is that its people have practically no access to clean drinking water. 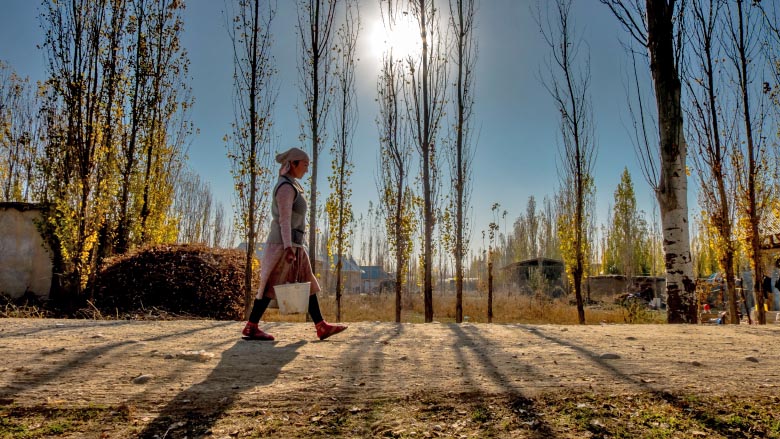 Gulkan carries 10 liters of water in each bucket.

In Soviet times, clean water, which was piped into a public standpipe, was a common thing in Kyrgyz villages. Yet people in Chook relied on the water from irrigation canals for their household needs. Locals say that extremely salty underground water made it impractical to drill wells, while the hilly terrain was a major obstacle to laying pipes that could bring spring water from the nearby mountains. 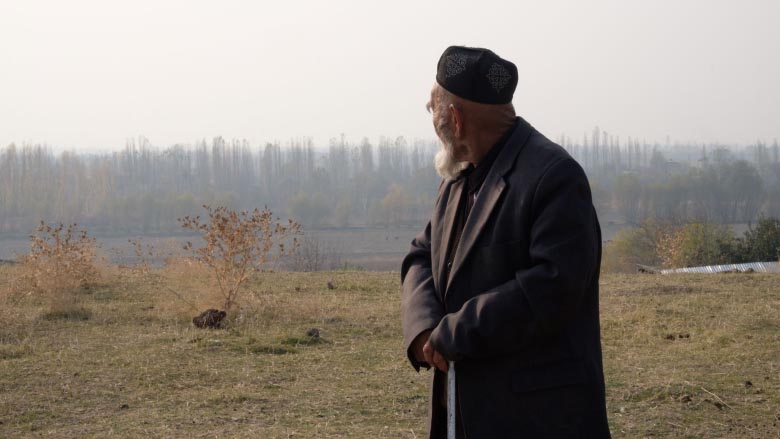 Resident of Chook says the nearest mountains with fresh water are some 30 kms away.

In 2017, the situation in Chook is much the same as it was in 1987, or even in 1957: people fetch water from the large irrigation canal in a neighboring village, or use water flowing in aryks, small ditches that run through the village’s few streets.

The water in canals and aryks is muddy and is believed to contain pesticides from the fields, but women use it to wash dishes and clothes, and even to cook meals. In the fall and winter, when there is no water in the canal and aryks due to the end of the harvesting season, the villagers often melt snow or use rain water for household needs. 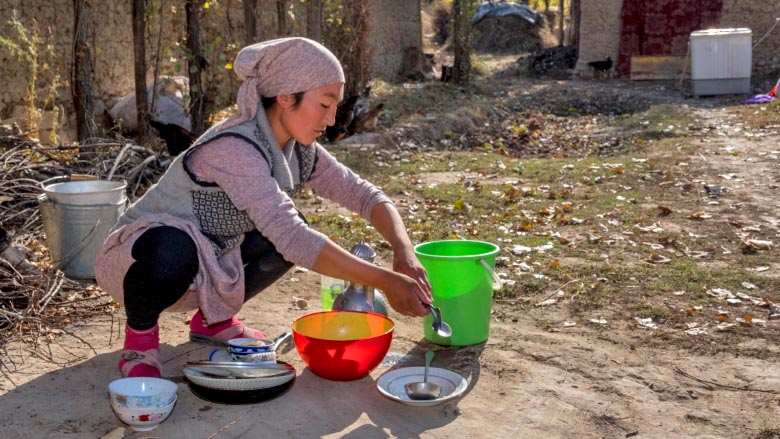 A regular dishwashing routine in Chook.

“I was born and grew up in this village, so living with no access to clean water is a normal thing for me and for many women in this village,” Gulkan says with a soft smile.

When Gulkan is busy baking bread or feeding children, it is her husband Jolchubek who puts two big metal cans, 20-liters each, on his donkey’s back and goes to the canal, located several kilometers away from their village. 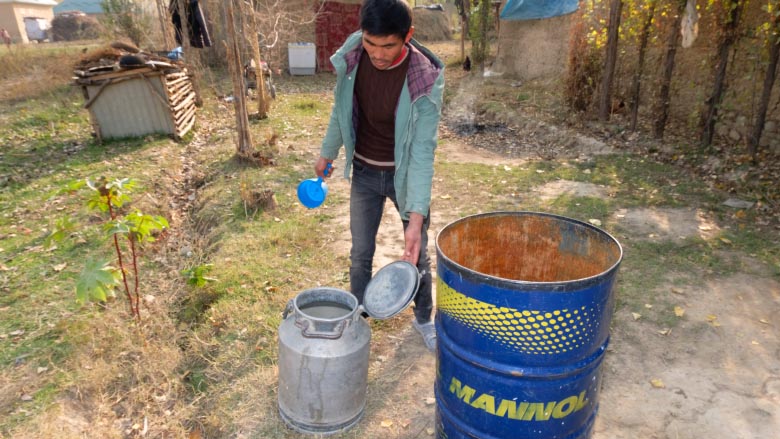 After the water settles in the bigger can, it is then poured into a smaller one. Jolchubek regularly paints the inner part of the large can, but salts contained in the water cause frequent corrosion of the cans’ inner walls.

Sometimes, when Jolchubek is away working in the cotton field that they farm for a living, Gulkan buys home-delivered water, or asks her oldest, 6-year-old daughter to take the bucket and join a caravan of other kids on donkey-pulled water carts in the daily journey to bring vital water to their homes. 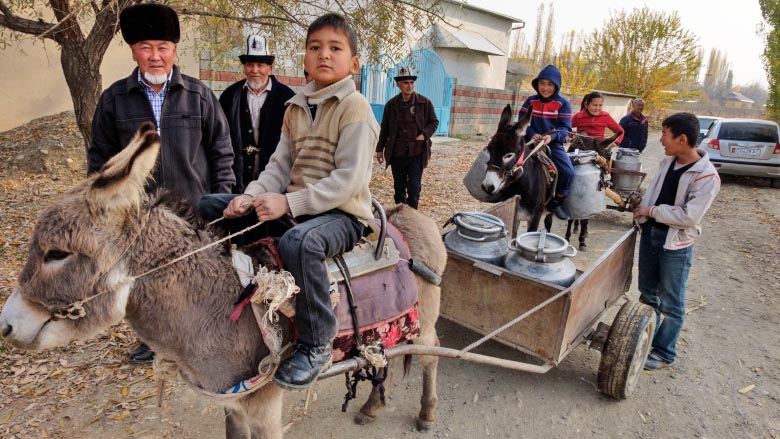 It takes kids up to three hours to get water from the canal on the backs of donkeys.

“When we have sudden guests or unexpectedly run out of water, I have to let my children skip school and instead send them to fetch water,” says Momun Hasekov, a neighbor of Gulkan and Zholchubek.

But the problem with access to clean water impacts not only the children’s school attendance -- it also affects their health. Gulkan’s two-year old son has been suffering from unstoppable diarrhea for many months, and the periodic medical treatment has not helped much. “I think it’s because of the water that we drink and wash our hands with,” says Gulkan who has to change her son’s pants every two-three hours. 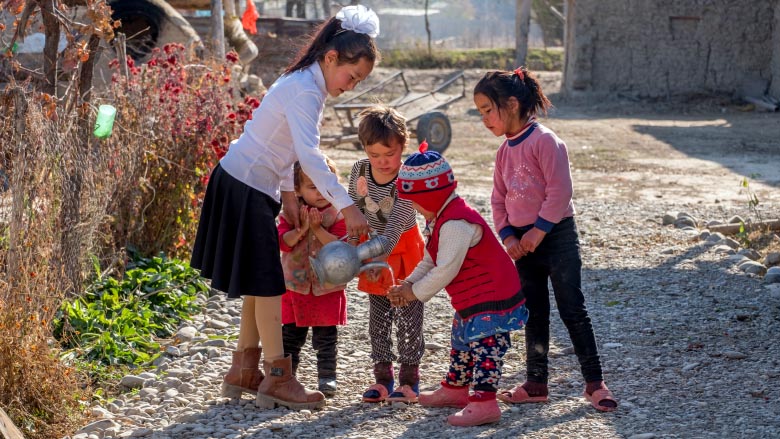 A local doctor, Janyshbek Samibaev, says he’s been observing a significantly greater increase in hepatitis as well as in kidney disease rates in the village. At a community meeting, the elderly citizens of Chook asked him if there is a connection between their irritated stomachs and the water they drink every day. “Of course, the quality of water does play a role,” he tells the old men. 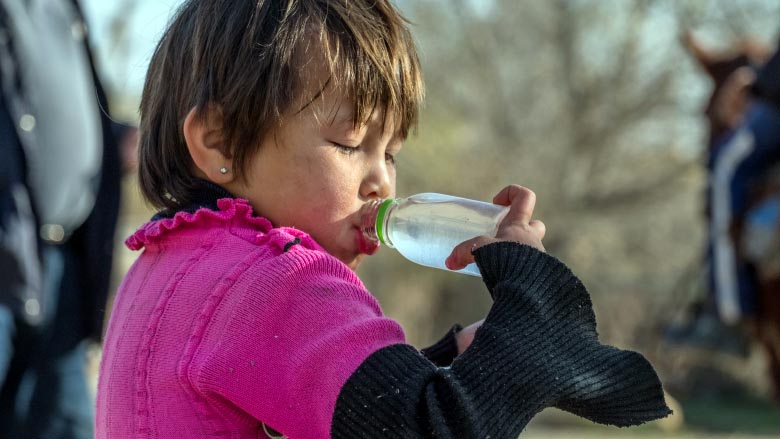 To prevent their kids from drinking unsafe water, parents give them bottles with boiled water.

“Please, bring the water to our village, and please do it in our lifetime,” the elders of Chook ask the head of the local village government, Taalaibek Tuibaev. He assures his fellow villagers that very soon the government will bring clean water to their homes, thanks to the launch of the national “Ala-Too Bulagy” (the Spring of Ala-Too) rural water supply and sanitation program, financed by the World Bank. The piped network will start in the mountains some thirty kilometers away, and every household will get an individual connection to metered water. 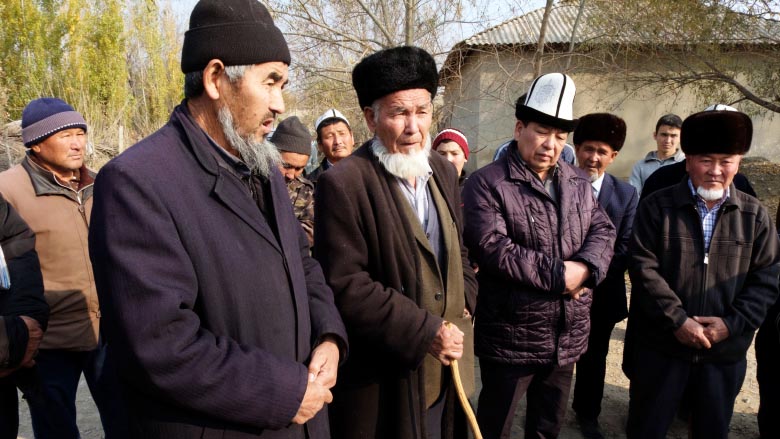 Having lived their entire lives with no access to clean water, the elders of Chook can’t wait to see the running tap water in their homes.

“Indeed, if clean water comes to our village, it will be like a fairy-tale turning into reality, like a dream coming true,” says Tuibaev in a conversation with the World Bank team visiting the village. “But our people are looking forward to the new reality. Remember all those new homes we saw that are built on migrants’ money? After the news spread that every household in the village will get connected to the clean water system, the people in Chook will now make sure that their new homes have in-house kitchens, bathrooms and toilets.” 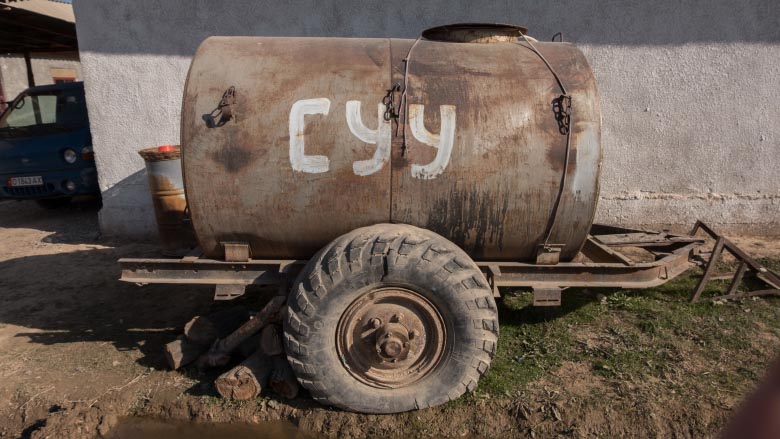 Very soon, such water storage containers will cease to be a visual staple of Chook.

The World Bank has committed US$ 59.5 million for the implementation of the Sustainable Rural Water Supply and Sanitation Development Project, which will reach 90 villages in the Kyrgyz Republic’s Osh, Chui and Issyk-Kul regions, and directly benefit some 207,000 people. The project is expected to have a positive impact on the quality of life of rural citizens, but especially women, children and the most vulnerable, and to bring about a major reduction in people effected by water-borne diseases in rural areas.