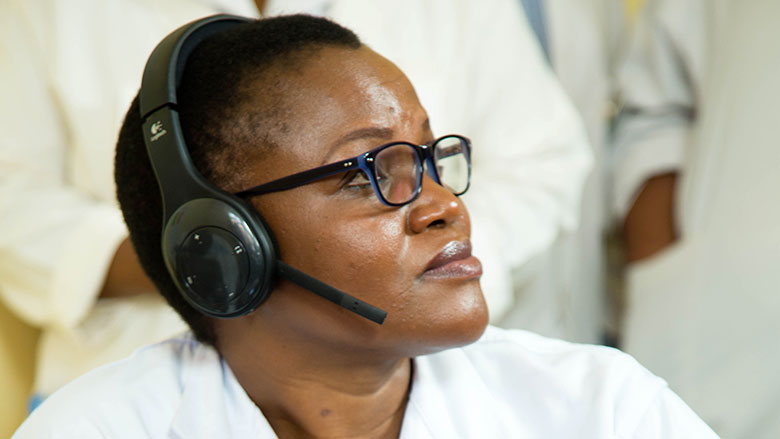 Dr Faraja Lutambi consults specialists in Dar es Salaam about a patient from the hospital where she works in Morogoro.

On the narrow emergency room bed at Morogoro Regional Hospital in central Tanzania, Selemani Omari looks frail and overwhelmed by the assortment of wires plugged into his body from a monitoring system by the bedside. He has been ailing for over three weeks, and one side of him feels weak.

Today, it appears, is his lucky day.

Dr. Faraja Lutambi is attending him, assisted by two nurses. The computerized system to which he has been wired up connects to a video conferencing facility mounted near the wall. On its screen are two specialist doctors from Muhimbili National Referral Hospital in Dar es Salaam, Tanzania’s business capital. Dr Lutambi is consulting them on Omari’s case via a Telemedicine System being piloted in eight hospitals.

Although Morogoro is only six hours from Dar es Salaam, and just four hours from Dodoma, Tanzania’s political capital, these distances can be a matter of life and death for a critically ill patient like Omari. In the past, emergency doctors cultivated their own personal networks to use whenever they came across a difficult case. But the telemedicine system provides a reliable way to share patient information, including ECG and X-ray imaging that are projected onto screens to help with diagnoses.

“With this system, specialists at Muhimbili are now able to advise professionals in remote locations who may not be specialized and help them assess a patient’s condition,” says Dr Juma Mfinanga, an emergency room specialist at Muhimbili.

These assessments lead to treatment on the spot, or referrals if need be.

And that’s not all. 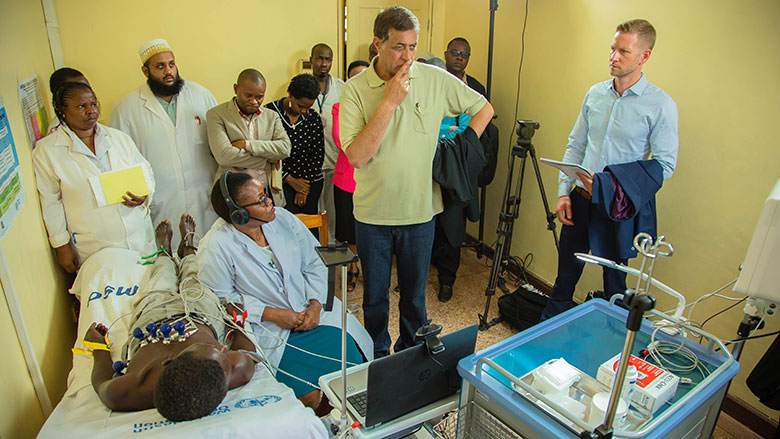 From a hospital in central Tanzania, doctors consult a specialist about a patient’s case via broadband video.

“Being referred can be very costly,” says Omari, the patient. “Transport has to cover me plus two caregivers. Also, caregivers will not be able to take care of their gardens and other activities.”

With its focus on e-referral, e-radiology, and e-consultation, telemedicine is being implemented as part of a pilot of the IDA-financed, Regional Communications Infrastructure and eGovernment Project (RCIP) for Tanzania. It started in June 2016 after ICT systems and tools had been bought and installed, including video conferencing facilities for the eight locations, and the local area network and WAN equipment. Skills development and training sessions were given before each telemedicine system opened.

The project aims to improve healthcare and health services in Tanzania through ICT. Its direct beneficiaries are the Ministry of Health and Social Welfare, and Muhimbili National Hospital, where the center is run by 12 emergency room specialists working in shifts. Hospitals in Nachingwea, Lindi, Kilosa, Turiani, Nyangao, Mafia island, and Morogoro are connected to it via broadband.

With a doctor-to-patient ratio of one for every 20,000 people, and with even fewer specialists to go around, the telemedicine project, though still small, is already helping.

“So far, we are registering more traffic from Mafia island than from any other location, because the island is faced with unique challenges due to its remote location,” says Modou Gaye, the Director of ICT at Muhimbili. Mafia lies offshore from Tanzania’s coast, in the Indian Ocean.

The project is addressing capacity gaps in other ways, too. At the Muhimbili center, each day kicks off with a discussion of the more difficult medical cases handled the day before, and all those who can connect are encouraged to participate. “Teaching one person in Mafia respiratory support means you are training potentially him or her to take care of a thousand patients,” says Dr Mfinanga, the emergency room specialist.

At the receiving end, back where we started in Morogoro, Dr Lutambi says telemedicine has greatly reduced the number of referrals as patients (and doctors) “get their answers right here in real time.” “The interaction with the specialists in Muhimbili and other centers has obviously been quite resourceful for us,” she says. “We have learnt modern ways of storing and retrieving patient information as well.”

RCIP, the parent project, has been underway since June 2009. Its overall objectives are to extend the geographic reach of broadband networks, lower their international costs, and improve government efficiency and transparency through eGovernment applications (such as e-procurement, business portals, birth registration, and telemedicine).

As RCIP heads towards closure, it does so having spearheaded more affordable wholesale internet bandwidth for telecom operators in Tanzania, increasing the affordable access to communications that has contributed to phenomenal growth in user penetration—from just 0.98% of Tanzania’s 50 million or more citizens in 2008, to 34% in 2015, surpassing the project target.

To date, most discussion of Tanzania’s internet and telecoms growth has been of the mobile money revolution and its impact, but the tentative results of the telemedicine pilot show just how much more potential there is for technology.

“Being a doctor is about saving lives, which is what this system has provided us,” says Dr Shao Patrick at Muhimbili in Dar. “But it has also ensured we only get those referrals that are necessary. In this way, it is helping to reduce the burden on families of travel costs, as well as the volume of people on our wards.”

In Tanzania, telemedicine helps poorer people most. Dr Mfinanga adds: “As we are only a few specialists supporting the country’s healthcare structure, this system makes us feel relevant to the general population, and not just those who can afford the costs of transfer to Muhimbili.”