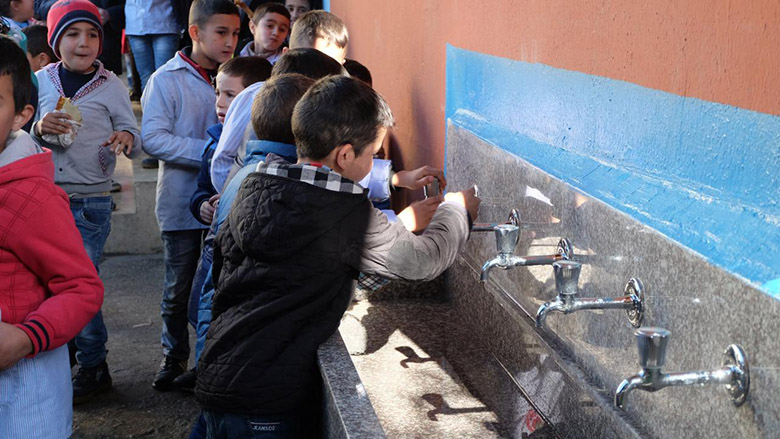 The Water Supply Augmentation Project, led by the Lebanese government, aims to increase the volume of water available to the Greater Beirut and Mount Lebanon area where approximately half of the Lebanese population lives. The Project is financed by the World Bank, Islamic Development Bank and Government of Lebanon. In this Q&A, Saroj Kumar Jha, World Bank Regional Director, for the Middle East, explains the importance of the Bisri Dam project for resolving Beirut’s long-lasting water shortage problem.

Q 1: Why is there a need for a dam in Bisri?  Who will benefit from it?

SKJ: The Bisri Dam will resolve one major problem that Lebanon’s residents have faced since the civil war: severe and chronic water shortages.

Over 1.6 million people living across the Greater Beirut & Mount Lebanon (GBML), including 460,000 living on less than $4 a day, will have improved access to clean water.  Once the dam is built, households will be able to depend on the public water network and will no longer need to rely on alternative water sources. They will hence see substantial reductions in their household water expenditures.

Q 2: What is the dam storage capacity?

SKJ: It is worthwhile to note that the Bisri Dam will capture rainwater that is normally flowing to the sea and will allow Lebanon to store the water in winter to be used during the dry season, when people need water the most.

The Bisri Dam will be constructed immediately upstream of the village of Bisri on the Bisri river. It will store 125 million cubic meters of water, and will fill up naturally in the winter and spring for use during the summer and fall. Without pumping, the water will flow to the GBML area entirely by gravity. It will go through a 26-kilometer underground tunnel, treated through the Ouardaniyeh water treatment plant, and distributed though networks that are currently being rehabilitated as part of the Greater Beirut Water Supply Project.

Q 3: How long will it take for the dam to be built?

SKJ: Construction of the dam will take about five years from the signing of the contract.

SKJ: Thank you for this question. Yes, the Bisri Dam will be safe.

The Government of Lebanon designed the Bisri Dam per the state-of-the-art seismic hazard assessment and design. An independent panel of international experts has reviewed the design of the dam and the geological studies and confirmed that it is safe.

These are internationally renowned technical experts in dam engineering, geology, and seismology who have worked on dams around the world, including dams located in seismic areas. In short, they confirmed that the Bisri Dam is designed to withstand the worst earthquakes and it will not in itself trigger them.  Also, the Bisri Dam will be equipped with seismic monitoring instruments that will continuously monitor the structure of the dam.

Q 5: Will the water be treated before reaching households?

SKJ: The water from Bisri Dam will be safe to drink, indeed.

The water that will flow from the Bisri Dam will reach Joun Lake which will be filled from various sources, namely the Awali river (stored in Bisri), Ain Zarqa Spring, Jezzine Springs and Lake Qaraoun. The Joun Lake water will be treated at a state-of-the-art water treatment plant in Wardanieh, 30 kilometers south of Beirut (see map). The treated water will flow through a conveyor to the upgraded GBML distribution system, ensuring steady and reliable water supply to up to 1.6 million residents of the area. The water will be safe to drink and will meet Lebanese drinking standards (LIBNOR NL 161) and/or EU standards (98/83/EC), whichever is the more stringent. The water quality will be monitored in the Joun Lake and at the exit of the Wardanieh water treatment plant to guarantee its quality.

Q 6: How will local communities be affected by the Bisri Dam?

SKJ: The project was designed according to international best practice in reducing the impacts on local communities. Those who will be impacted by the project are entirely accounted for and measures are put in place to ensure that their livelihoods are sustained and concerns are addressed.

The expropriation of land is ongoing and affects 861 landowners of which only 96 live in the area and rely on the land partially for their income and livelihood. Land owners are provided cash compensation calculated at replacement cost in accordance with the World Bank’s policies. Additional assistance will be provided to help restore incomes and rehabilitate livelihoods as needed.

A comprehensive Resettlement Action Plan was developed and details the process through which land expropriation and resettlement is being undertaken. The document was consulted widely with the landowners and their representatives, and is publicly disclosed and available at www.cdr.gov.lb

Q 7: Will the Bisri Dam affect the rich biodiversity in the region?

SKJ: This is an important question. Mitigating the impacts on biodiversity is a key priority of this project.

A detailed action plan was put in place. It is based on a biodiversity survey covering all major taxa, including amphibians, reptiles and macro-invertebrates, as well as location and habitat usage information for flora, mammals, birds and fish. This biodiversity survey has been recently updated, as part of a comprehensive Ecological Compensation Plan. The objective is to fully compensate for biodiversity impacts, through translocating some of the species, conserving or strengthening existing natural habitats, restoration of abandoned quarries and afforestation/reforestation. These activities are designed in a way that the biodiversity result of the Bisri Dam is ideally with “net gains” and at the minimum with “no loss”. The Ecological Compensation Plan is being prepared under close supervision from the Ministry of Environment and the Ministry of Agriculture. The plan has been thoroughly consulted during the past few months with different stakeholders, including different government agencies, municipalities, religious notables, NGOs, consultants and research institutes. The Ecological Compensation Plan is near completion and will be reviewed by the Ministry of Environment.

A specialized team of environmental experts is working closely with the Ministry of Environment to monitor the implementation of the Environment and Social Management Plan which was also publicly disclosed and is available at www.cdr.gov.lb.

Q 8: What is planned for the cultural and archeological sites in the area?

SKJ: Having worked for a long time in Lebanon, the World Bank is very much aware of the prevalence and value of Lebanon’s cultural and archeological wealth. This is why we are supporting the Ministry of Culture in ensuring that the cultural and archeological sites are fully preserved. The Mar Moussa church and the remains of the Saint Sophia monastery will be relocated nearby and made accessible to parishioners and tourists, with the close oversight of the Maronite church authorities and parishioners. As for the archeological sites, a state-of-the art survey is currently taking place to reveal the history of the valley, which is seen, by archeologist, as a model to be followed by development projects. Any archeological findings will be preserved with close coordination and supervision of the Directorate General of Antiquities. Archeological works will be financed by the project.

Q 9: Aren’t there simpler and cheaper ways to increase water supply to GBML?

SKJ: For decades, the Lebanese government, civil society, academia and their international partners have examined the most cost effective, sustainable and least impactful way to ensure safe drinking water to Lebanon’s residents. The Lebanese National Strategy for Water, which was based on a nationally-owned process, concluded that the construction of a dam at the Bisri site was one of the ways in which Lebanon can capture and utilize its water resources effectively.

Indeed, during the design of the project, the Government commissioned a detailed Analysis of Alternatives, which examined the technical, economic, environmental and social aspects of four dam options (Bisri, Janna, Damour East and Damour West) and several non-dam options, including improved groundwater management, desalination, demand management and treated wastewater reuse. The analysis showed that a combination of non-dam and dam actions was needed to increase the volume of water provided to the GBML on the long-term.

Q 10: Why the focus on the Greater Beirut and Mount Lebanon region?

SKJ: The Government of Lebanon has prioritized this project as a way to ensure that 1.6 million people living in the Greater Beirut and Mount Lebanon area have improved access to safe and clean water.  Meanwhile, the Bank is also working closely with the Government across many sectors and across the entire territory of Lebanon. We are supporting the environment, transport, health, education and social protection sectors across Lebanon, including those areas that are directly impacted by the large influx of Syrian refugees.

Q 11: Was civil society involved in the process? Were their concerns taken into account?

Mitigating environmental and social risks during the construction and operation of dams is a high priority. An Environment and Social Impact Assessment was carried out in close collaboration with government agencies, civil society, the private sector and community members and has been approved by the Ministry of Environment. A detailed Resettlement Action Plan was also developed and details the process through which land expropriation and resettlement will be undertaken. Both documents were publicly disclosed and are available at www.cdr.gov.lb

Q 12.  Has the Bank adhered to its procedures and guidelines in its work on the Bisri Dam project?

SKJ: Yes. The Inspection Panel, an independent accountability mechanism of the World Bank, has twice registered a Request for Inspection related to water projects in Lebanon in recent years but in each case, it did not recommend an investigation into the issues raised in the requests.  In both cases, the Bank’s Board agreed with the Panel’s conclusions.

The first request came to The Panel in November, 2010, and raised concerns about water quality, increase in water tariffs, and water availability related to the then proposed Greater Beirut Water Supply Project.  The second request came in September, 2018 and concerned the Lebanon Water Supply Augmentation Project (Bisri Dam), and the Greater Beirut Water Supply Project and additional financing.  It focused on environmental, economic, archaeological, and safety issues.

Q 13. What was the World Bank’s response to the latest Inspection Panel request?

SKJ: The World Bank management carefully reviewed the concerns of the requestors regarding the potential impact that might arise from the Bisri Dam Project and confirmed that these were carefully analyzed during project preparation, in line with Bank policies and due diligence procedures.  In Management’s view, possible project impacts are appropriately addressed as part of the Environmental and Social Impact Assessment, Environmental and Social Management Plan, and Resettlement Action Plan.

Management confirmed that the Bisri Dam Project had been designed based on scientific studies undertaken by world-class international and local experts and reviewed by two panels – one on Dam Safety and another on Environment and Social issues – as well as World Bank experts.

In addition, the project team has had extensive communications with the Requesters’ representatives on the issues raised in the request, engaging in detailed email communication and face-to-face meetings.  To further strengthen the consultation process, the project team will sustain a high frequency of supervision missions and site visits, continue to engage with stakeholders, especially women, and ensure that progress on the various action plans are documented and made publicly available.

SKJ: Yes. The Lebanese government has been considering the Bisri Dam project for over 30 years and it is a crucial part of Lebanon’s National Water Strategy. For our part, the World Bank aims to support this pro-poor project and we will supervise its implementation very closely to ensure it meets the highest international standards.

To learn more about the Inspection Panel requests related to water issues in Lebanon, visit the panel’s website at https://www.inspectionpanel.org/