Cash Transfers in Benin: A Response to Child Trafficking 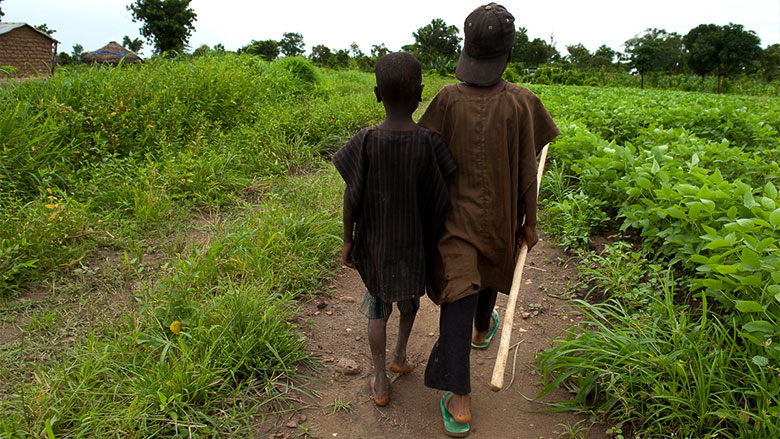 ZA-KPOTA, November 14, 2017‒ The commune of Za-Kpota, in central Benin, has long had the unfortunate reputation of serving as the support base for child trafficking to Nigeria, where the children are exploited for cheap labor in the Abeokuta stone quarries and provide a meager income to their poor families. However, for two years, family allocations established through a pilot social safety net program have eliminated the need for parents to send their children to work in Nigeria.

This transformation was observed on October 16, 2017, on the eve of the International Day for the Eradication of Poverty, when we visited the village of Lontonkpa, one of the hotbeds for child trafficking, with civil society organizations and journalists to assess the impact of this program.

The monthly allocation of CFAF 3,500 paid to each poor household and an additional monthly salary of CFAF 9,600 for each person engaged in labor-intensive public works projects during the four months of the agricultural lean season, dramatically transformed the life of this community.

“Before, there was a lot of poverty in our village. We reluctantly sent our children to Nigeria to work in order to have something to eat. Today, the money I receive at the end of every month allows me to comfortably send my children to school instead of making them work. The young palm trees in Lontonkpa have also found a reprieve since no one is cutting down their branches anymore to make brooms and earn a little bit of money,” states Yvette Adangnonhou, one of the female beneficiaries of this cash transfer program.

Next to her, another beneficiary, Léonie Kanhou Tougan, explains to us that she was able to undertake an income-generating activity and save enough money to replace the roof on her house. “We have established a monthly common fund of CFAF 2,000 each. I also worked in the area of roads development, which allowed me to start a pig farming business. Even if the project ends now, I will have no reason to complain. I can make a living,” she says.

The pilot social safety net program is being implemented through the World Bank-financed Decentralized Community-Driven Services Project (PSDCC)). Over the course of two years, it provided a total of CFAF 2.3 billion (approximately $4 million) in regular cash transfers to 13,000 extremely poor Beninese households in 125 villages.

“In several villages in Benin, there are still people who would not have enough to eat without assistance. These transfers have given them back their dignity and helped them integrate socially,” explains Germain Ouin-Ouro, the PSDCC Executive Secretary.

In the commune of Za-Kpota, the pilot social safety net program was implemented in 12 villages and benefited 1,492 extremely poor households. In Lontonkpa, the public works projects have helped develop the main road that leads to the village. “It used to be almost impossible to ride a bike on this road, which was, in fact, a mere trail. This road is now a source of pride for the community, who deserve the credit for having built it with their own hands,” Cyprien Djiholissè, one of the beneficiaries of the conditional cash transfers, proudly asserts.

In addition to the transfers and development of the rural road, the project financed the digging of three wells to give residents access to potable water.  This improvement came as a relief to Antoine Affokpofi, the mayor of the commune of Za-Kpota: “We are struggling to provide the basics for our communities.  We have made a commitment to ensure the continuation of the various projects. As long as there are people living in poverty, we will not be able to fully take pride in the performance of our mandate,” he declares. In his view, the different project activities are of critical importance as they aim to reduce extreme poverty and social exclusion.

With a total amount of $76 million (CFAF 37 billion), the PSDCC was launched in 2013 and covers all 77 communes in Benin. It aims to strengthen human capital and help the beneficiary communes and communities develop sufficient capacities to succeed at taking charge of their own development by identifying the necessary subprojects for themselves and being actively involved in bringing them to fruition.