A Roof Over Our Heads: Ensuring Adequate Housing for All Bulgarians 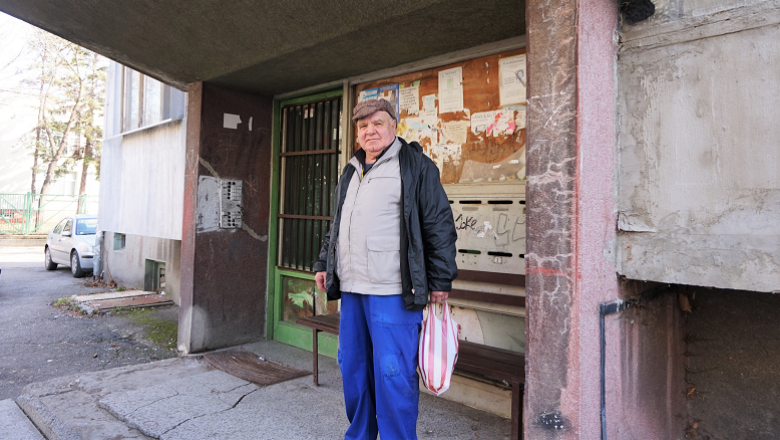 Voin Lazarov in front of his residential building in Sofia, Bulgaria.

In 1967, Voin Lazarov became one of the first occupants of residential building number 43, in the Druzba complex in Sofia, Bulgaria. Over the next five decades, his building fell increasingly into disrepair, without ever seeing any renovations or upgrades. Residents faced year after year of rundown facilities and deteriorating living conditions, while struggling with a lack of funding and decreased personal incomes. 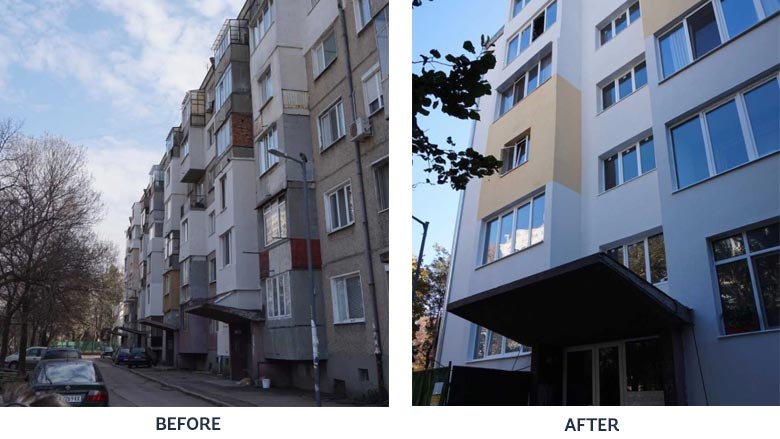 Voin Lazarov's residential building before and after the renovations.

That all changed in early 2016, however, when Lazarov, now a retiree, and his neighbors realized they should unite and register as a Homeowners Association to apply for funding under a government energy efficiency program for residential buildings. Within eight months, the building was almost unrecognizable, having undergone major renovations.

But not all Bulgarians are as fortunate today as Voin Lazarov. Many people face significant challenges either attaining or maintaining “a roof over their heads”, because they cannot afford to buy or even rent housing. Some 42% of single person households, and 31% of tenants of market priced rentals, are overburdened with housing costs. And more than one third of young adults are unable to afford a house, thereby continuing to live with their parents.

While home-ownership has increased overall throughout the past few decades, there is a disproportionate number of vacant units today: many apartments have owners, but not residents. At the same time, an increasing number of people are living in slums and illegal settlements, as cash-strapped municipalities struggle to provide social housing to their most vulnerable citizens. And, much of the housing stock is old and poorly maintained, with some of it potentially vulnerable to seismic damage.

Around one million people – or one in seven Bulgarians – live in dwellings that are shared by more than one family. In other words, “doubling-up” is common, especially among the lower income households in larger urban areas. Often, up to three generations – or around 6-8 family members – live in a small 60m2 apartment.

Panel buildings raise safety questions.
Furthermore, much of Bulgaria’s housing stock comprises old socialist-era multi-family buildings, many of which are made of prefabricated panel blocks. Over three-fourths of apartments in the country are in buildings that are more than 30 years old, and lack of maintenance has led to damaged roofs and facades, ill-maintained stairwells and hallways, and leaking pipes.

Compounding these issues, Bulgaria lacks a robust and affordable rental market. Less than 5% of the country’s housing stock is leased out in the rental market, which goes beyond housing affordability and adversely effects labor mobility, particularly for young people. 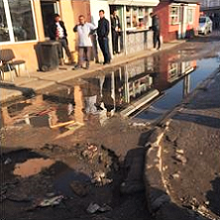 A Roma settlement in Sofia.
The poorest in Bulgaria face the harshest conditions. Public expenditure in the housing sector, and especially funding targeted to lower income and vulnerable groups, is less than 2%, of the overall state budget. A significant lack of both public and private investment in low-income areas has resulted in ghettos in which low-income communities (including a high proportion of Roma households) feel marginalized from society.

To address all of these critical challenges, the Government of Bulgaria is currently developing a new National Housing Strategy, which is benefitting from technical advice and policy guidance from the World Bank, including through analysis in the report, Bulgaria: Housing Sector Assessment.

Key recommendations include ensuring that the new National Housing Strategy defines laws and regulations so that the market functions as effectively and fairly as possible – targeting public investments to the poorest households, while creating a policy environment for the private sector to effectively deliver adequate, affordable, and safe housing for the vast majority of the population.

An essential first step to addressing the high vacancy rate of housing units would be to establish a better understanding of the underlying causes, particularly in otherwise growing, vibrant housing markets. The high vacancy rates in nearly all Bulgarian cities present a massive opportunity: a potential reserve that, if “unlocked”, could serve as market-based rentals or even subsidized social housing.

Increasing the supply of rental housing will help increase affordability, especially for young families, and lower income groups, and help make renting a viable alternative to purchasing a house. This will require the appropriate legislation to be in place, however.

The poorest households in Bulgaria typically should not use more than 10-15% of their incomes on housing and related utility expenses combined. Subsidies for both housing and energy would be more effective and equitable if they were structured around a voucher framework, as is the case in many EU countries. This allowance could be used to assist poor households to rent a social house, or pay for improvements or maintenance fees in multifamily buildings.

Voin Lazarov and his neighbors waited five decades to see essential improvements to their apartment building. The new National Housing Strategy should help ensure that state support should provide for more Bulgarians to act together securing an affordable, safe and secure roof over their head.

Residential buildings in Blagoevgrad retrofitted under the National Program for Improving Energy Efficiency in Residential Buildings.