Bangladesh Continues to Reduce Poverty But at Slower Pace 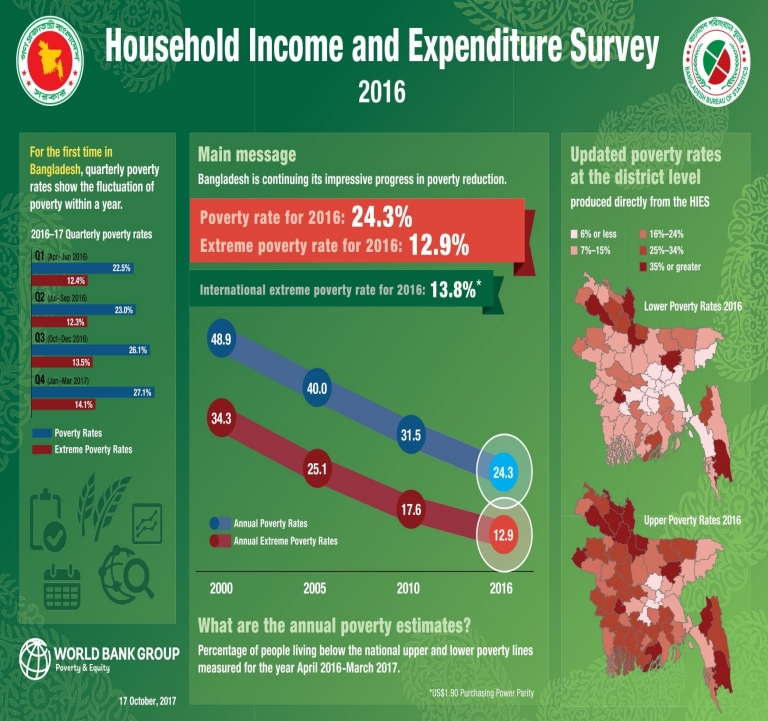 The 2016/17 HIES and the official annual poverty rate – released on October 17, End Poverty Day – interviewed four times as many households as the previous HIES, allowing Bangladesh to produce poverty estimates at quarterly intervals and the district level for the first time.

"The availability of quarterly poverty estimates is important for more timely and effective policy advice, and a better understanding of how poverty can fluctuate from season to season. Second, the new survey directly estimates poverty at the district level. HIES has become a more relevant and effective tool for policy makers to decide policies, design interventions, and target the allocation of poverty alleviation programs."
Rajashree Paralkar
Operations Manager for Bangladesh, World Bank

Although poverty is still high, Bangladesh has continued to make impressive progress in reducing poverty.  Measured against the international extreme poverty line, poverty fell from 18.5% in 2010 to 13.8% in 2016, and the country is on track to reach the first Sustainable Development Goal of eradicating extreme poverty by 2030. Progress on reducing poverty measured by the national upper poverty line has been equally strong. In 2010, almost one third of the country’s population lived in poverty; by 2016 this had fallen to less than one-fourth. Since 2010, 8 million Bangladeshis moved out of poverty.

Progress in reducing poverty was also uneven across divisions, with the North West seeing poverty rise. Poverty has risen in the north-west Rangpur; stagnated in Rajshahi and Khulna in the west; fallen moderately in Chittagong; and fallen rapidly in Barisal, Dhaka and Sylhet Divisions. The stronger progress of poverty reduction in the eastern regions countered the gains that had been recorded from 2005 to 2010 in reducing the welfare gap between eastern and western Bangladesh. It highlights the need for further investments to increase income growth in the west.