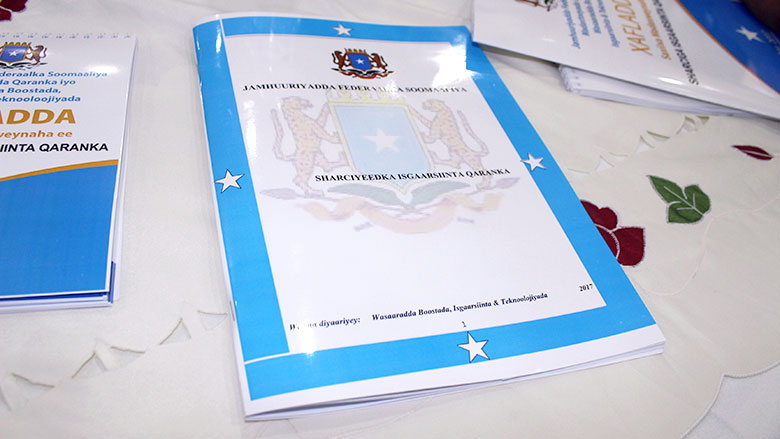 After more than two-and-a-half decades of crippling conflict, Somalia faces the considerable challenge of rebuilding its economy and institutions. This process took an important step as Somalia’s President signed into law a Communications Act providing the tools to regulate a sector that, until recently, had made only a limited, formal contribution to the Somali Treasury, but could potentially contribute as much as 11% of Somalia’s GDP.

Somalia's new president, Mohamed Abdullahi Mohamed, was elected to office in February 2017. In August, the draft of the Communications Act received approval from both the Upper and Lower Houses of Parliament, having been halted three times at those stages during Somalia’s internationally backed Federal Government, which was first established in 2012.

Compared to some countries in Africa, Information and Communication Technologies (ICTs) have experienced relatively high levels of penetration and low prices in Somalia, with private enterprise leading the way. But while this progress is significant, the absence of any formal regulatory framework or independent regulatory body had resulted in uncertainty, creating vulnerabilities for the development and scalability of ICTs across the country.

Somalia is estimated to have over six million mobile phone users (of a population of about 14 million) but lags behind most African countries in terms of international capacity, national connectivity, and Internet take-up. Mobile money has also proved highly popular, with some 72% of Somalis over the age of 16 using it, and the total value of transactions taking place in it amounting to about US$ 2.7 billion a month.

But, in the case of fraud, consumers have previously had no legal recourse to appeal.

The lack of a solid legal framework for the ICT sector is a significant risk for the economy, specifically in areas of remittances, mobile banking, mobile-money services, and mobile-telecom services. By fostering a sense of certainty, and by promoting investment and infrastructure, a clear legal framework will result in major benefits for the people who use the ICT services now considered critical to Somali’s economy.

The new law should mean Somali consumers benefit from an increasing array of mobile phone services, such as roaming, interconnection, and secure mobile banking services. The law protects consumer rights and provides the basis for issuing licenses to mobile operators and levying taxes, generating additional tax revenue for the government.

The possibility of interconnection among operators that opens the way for international roaming was previously held back by the fact that none of the operators had internationally accepted licenses. It creates the basis for the registration of SIM cards—an essential step for national security—and provides protection for national ICT assets, such as the +252-country code and the .so domain for internet addresses.

The World Bank’s ICT Sector Support Program has been providing expert technical assistance to the Federal Government of Somalia, the Ministry of Posts, Telecommunications and Technology, and the Ministry of Finance, closely supporting them since 2013.

The program was itself initially supported by the State and Peacebuilding Fund and, more recently, by the Somalia Multi-Partner Fund and Public Private Infrastructure Advisory Fund. It has convened stakeholder consultation workshops and provided advice on areas of best practice in regulatory frameworks, licensing, and translation. Other support includes the creation of a national broadband network linking 15 government institutions, formally handed over in August 2017, and Internet connectivity for universities through a Research and Education network, which has been operational since September 2017.

Another arm of the World Bank Group, the International Finance Corporation (IFC) assisted in the making of the new law through an ICT Public Private dialogue forum, which held its first meeting in Nairobi in March 2017, with subsequent meetings dedicated to coordinating comments on the draft law in Somali federal member states.

The Bank plans to help Somali’s federal government as it implements all the provisions of the Communications Act, with its central element the establishment of the independent regulatory body, the National Communications Agency (NCA).

The NCA is expected to expand connectivity, improve the efficiency of the sector, and boost market competition. It will be able to regulate the telecom and the technical elements of broadcasting—the standard practice globally—and grant formal licenses. It can also oversee important regulatory issues, such as the spread of mobile money.

Before making any major decisions, though, the NCA or independent regulator will be required to consult its major stakeholders, like its consumers and private sector firms. And it will be held accountable for the actions it takes.

The Communications Act and the creation of an independent regulator are significant steps in the process of reestablishing the rule of law and creating sound public institutions in Somalia. The adoption of the act is a milestone that signals the country is committed to reviving fundamental institutions, ones with solid regulations for vital industries.