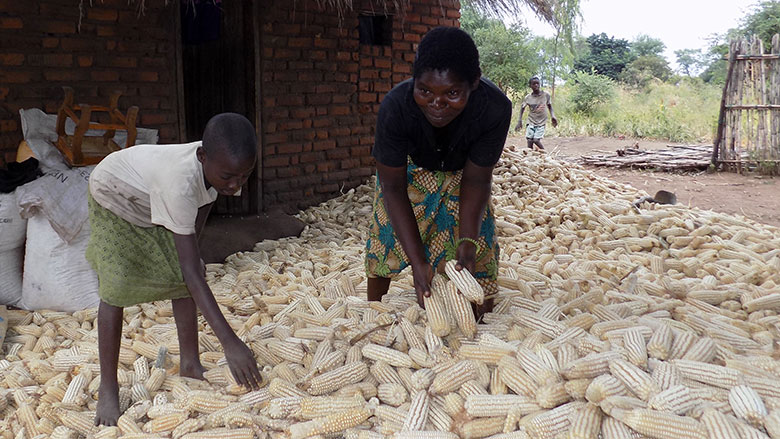 An abundant harvest for Patricia Dzimbiri and her daughter in Malawi’s Salima District.

LILONGWE, September 14, 2017 – Across three countries in southern Africa where maize (also known as “corn” in the Americas) is a staple food, a farmer-centric approach to adopting conservation techniques in agriculture is resulting in better food crop yields---a blessing for the region’s small-scale farmers.

Many small-scale farmers in Malawi, Mozambique and Zambia, where the techniques are being tested, have long had to deal with poor soil, little rain, and low yields. Conservation Agriculture improves the long-term environmental and financial sustainability of farming by adopting soil management practices that minimize disruption to the soil's structure, composition, and natural biodiversity.

Under the auspices of the World Bank-financed Agricultural Productivity Program for Southern Africa (APPSA), women farmers in Malawi are among those taking part in the research. Conservation farming is one of the low-cost technologies being championed under APPSA. In practice, it includes covering the soil with mulch, using only a minimal amount of digging to till the soil, and planting maize and legumes together.

Regional Centers of Leadership for staple foods like maize, rice, and legumes such as cowpeas, are being established as part of the project, and building research capacity. Malawi is the leadership center for maize-based farming systems, Mozambique is the center for rice research, and Zambia for legumes.

At least 30 per cent of the farmers targeted by the project are women.

Patricia Dzimbiri is one of them. Aged 37, she comes from Chinguluwe Area in Malawi’s Salima District and has been participating in farmers’ field trials for conservation agriculture and the intercropping of maize and legumes for three consecutive years.

In the 2016/2017 cropping season, Dzimbiri set an acre of land aside for two field demonstrations.

In the first, she compared maize grown using conservation agriculture techniques, with maize grown using more conventional farming practices. She was thrilled with the results. “The maize grew faster and bigger in the conservation plot, and needed only hand weeding, as there were far fewer weeds,” Dzimbiri said. Where the maize covered the ground in shade it also suppressed the growth of weeds.

Moisture and nutrient retention were much higher in this plot than in the one farmed using conventional methods. And so were yields: Dzimbiri harvested 225 kg of maize on the trial plot, compared to 150 kg from a conventional plot of the same size.

In the second demonstration, she compared growing maize intercropped with cowpeas, to maize grown alone, and grew both using conservation agriculture methods. She noticed that the maize grown with cowpeas looked much greener on top. “Cowpeas, being a legume, fix the nutrients that are used by maize [in the soil]. The canopy formed by the cowpeas retained extra moisture for the crops,” she said.

She harvested 200 kg of maize on the intercropped plot compared to 125 kg on the non-intercropped.

Better harvests have improved her cash flow. As a member of Tiyesere Village Savings and Loans Group, Dzimbiri can save money to buy inputs in time for the next cropping season. She has also bought livestock for breeding.

In her lead role, she is passing on her knowledge to fellow farmers. Dzimbiri has personally mentored seven farmers from nearby villages, and shared her know-how with 70 others on field days and in other forums.

A lead farmer is a successful, innovative farmer committed to training others, who works directly with research and extension agents to champion a technology in their community. Dzimbiri plans to expand her intercropping of maize and legumes to 2 acres of land.

Agricultural extension or technical support services by Malawi’s Ministry of Agriculture, Irrigation and Water Development work in close collaboration with the Chitala Agricultural Research Station to support the project, which is scheduled to close in 2018.

The project obtained a US$87 million credit from the International Development Association for the three countries involved, with the Centre for Coordination of Agricultural Research and Development in Southern Africa facilitating the program on a regional level.