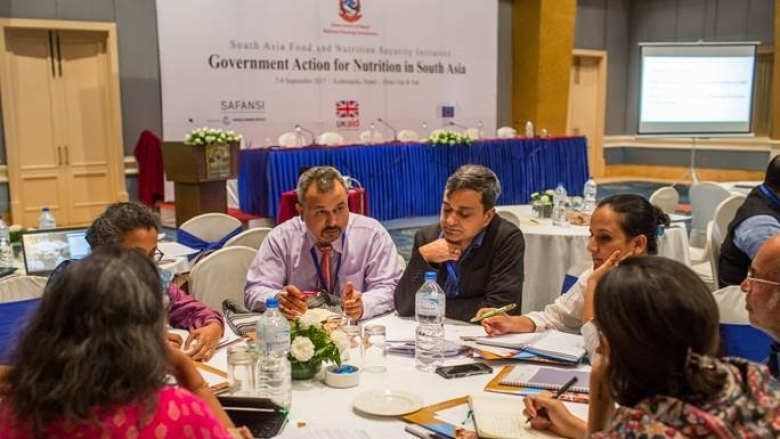 Participants discuss the importance of proper budgeting for nutrition during a break out exercise, and how doing so can lead to a reduction in malnutrition indicators.

Since 1990, chronic malnutrition has declined by almost half in South Asia, falling from 61 percent to 36 percent.

However, the number of children who are stunted – or underweight or lower than average height for their age—remains high and has even increased in some countries.

This is despite strong economic growth and a decline in poverty.

Good nutrition is critical for a healthy, well-educated and productive population and determines a country’s economic development. For South Asian governments, improving nutrition is a national priority.

Earlier this month, 140 government representatives, civil society organizations and international donors convened at a regional roundtable Government Action for Nutrition to share their experience in designing and implementing nutrition programs.

The National Planning Commission of the Government of Nepal, which reduced stunting from 57 percent in 2001 to 36 percent in 2016, hosted the event.

At the inaugural ceremony, the Right Honorable Prime Minister, Mr. Sher Bahadur Deuba, reiterated the Government of Nepal’s commitment to nutrition. “Our government has fully subscribed to the Sustainable Development Goals (SDGs) agenda that includes the goal of reducing malnutrition in order to ensure that young children, adolescents, and women of reproductive age are well nourished, food secure, healthy and leading a productive lifestyle.”

Likewise, Honorable Member of National Planning Commission, Prof. Dr. Geeta Bhakta Joshi emphasized in his welcome address that “nutrition should be the common political agenda of all political parties in the region to strengthen, empower and expand the SUN Movement.”

On the topic of budgetary planning and tracking, the discussion focused on the need for, and access to better tools.  In that regard, Dr. Shereen Mustafa of the Government of Sindh, Pakistan noted that “realization is already great. Now we need to help those at the mid-level operationalize these issues.  We need to reach out to program managers, share experiences and tools, and do all that we can to help the middle tier implement the programs.”

In a session on building support for high-level change, Rajlakshmi Nair from the UNICEF Nutrition Mission in Maharashtra State, India argued that “data must be a driver for future programming in order to improve the government interventions. Often, governments are criticized for their poor-quality data, yet, when systems start delivering and there is increasing anecdotal evidence on their effectiveness, this gives a sense of confidence for external evaluations”.

The event was sponsored by the South Asia Food and Nutrition Security Initiative (SAFANSI), which is administered by the World Bank with funding from the UK Government and the European Commission.

“We want this event to be the first in a series of regional roundtables that identify best practices and help governments accelerate progress in reducing malnutrition,” said World Bank’s Acting Country Manager Roshan Darshan Bajracharya.

Through these events, SAFANSI is supporting regional government-led efforts towards more integrated food and nutrition security actions, working with existing knowledge networks to develop a strong cadre of advocates, policy-makers, and practitioners.

Recognizing that nutrition is a multisectoral issue that requires high-level political support to successfully achieve the SDGs, the office of the Chief Executive of the Islamic Republic of Afghanistan and United Nations (FAO, UNICEF, WFP) signed a memorandum of understanding to establish an inter-ministerial coordination mechanism to improve food and nutrition security status of the people of the country.

Attendees committed to pushing forward the nutrition agenda in South Asia at a second Roundtable scheduled in 2018.