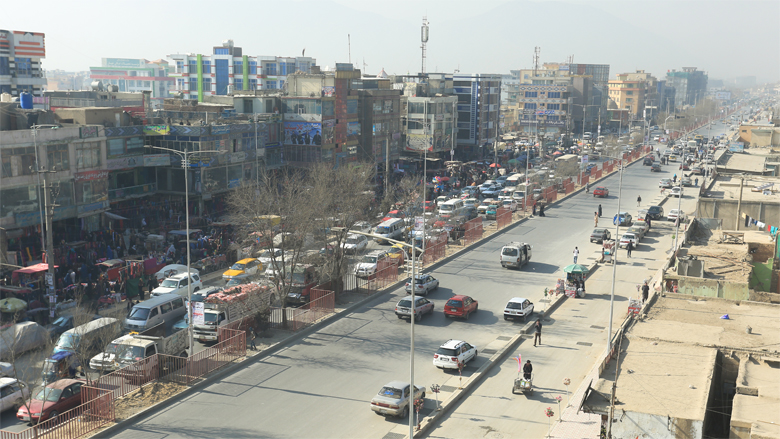 Kabul Municipality, with support from the Kabul Urban Transport Efficiency Improvement Project rehabilitated the 4.9 kilometer Kart-e-Naw road, and includes bus stations, sidewalks and streetlights. The road is one of the six main roads of Kabul city which links eastern Kabul City to its center.

"The road is modern and systematic, the culverts, green spaces, footpaths, are all designed in a well-planned manner, and street lighting at night makes the area safe, bright and beautiful." 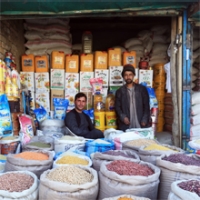 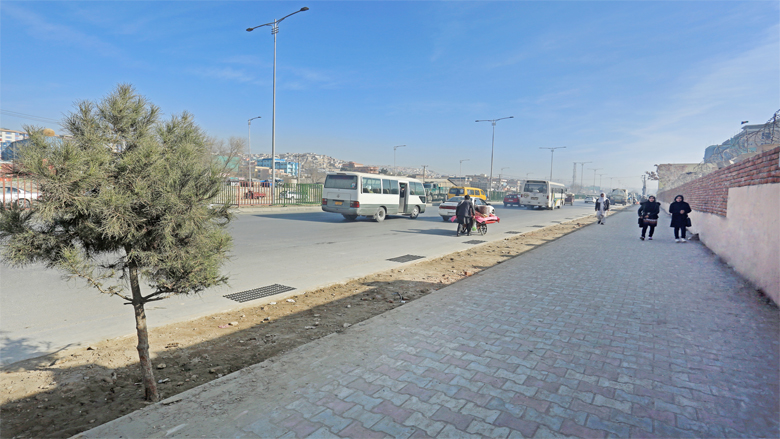 “In the past, the road and sidewalks were muddy and dusty. All our clothes would get dusty but now they stay clean,” local resident Faridoon says. “Also, now that the road is paved, most importantly, traffic accidents have decreased.” With funding support from the Afghanistan Reconstruction Trust Fund (ARTF), KUTEI targets the improvement of transport services through a package of interrelated interventions to build Kabul Municipality’s capacity.

KABUL CITY – Wide roads with cars driving by, sidewalks filled with chatty pedestrians, and streetlights that twinkle in the evening haze add to the liveliness of Kart-e-Naw neighborhood. Shopkeeper Abdul Bashir, 37, glances out the window as he deals with a stream of customers. The locality’s new face has been very good for business and he has not had a chance to touch his cup of chai (tea).

Bashir is one of many shop owners in Kart-e-Naw neighborhood in District 8 in Kabul, the capital city of Afghanistan. The reconstruction of the main road outside his shop has ensured that he no longer has to deal with dust and mud, and this has improved the footfall in his large superstore. “After the road was reconstructed, my sales increased by 30 percent,” he says. “Now I open early and close late due to the constant stream of customers.”

The rehabilitation of the locality, including the newly paved main road, new sidewalks, and streetlights, was carried out under the Kabul Urban Transport Efficiency Improvement (KUTEI) project. “I was born and grew up here and so far I have never seen the kind of work that KUTEI has done,” says a grateful Bashir. “The road is modern and systematic, the culverts, green spaces, footpaths, are all designed in a well-planned manner, and street lighting at night makes the area safe, bright and beautiful.”

Kart-e-Naw road is one of the main roads of Kabul city connecting two major parts, the east and the city center. It links four Kabul Municipality districts, improving transit for thousands of commuters. To date, KUTEI has completed the rehabilitation projects of six main roads in the city.

With funding support from the Afghanistan Reconstruction Trust Fund (ARTF), KUTEI targets the improvement of transport services through a package of interrelated interventions to build Kabul Municipality’s capacity.

Kabul Municipality, through KUTEI, started the reconstruction of Kart-e-Naw road in 2015 and inaugurated it in 2017. The Kart-e-Naw road reconstruction project, which included two main roads and service roads totaling 4.9 kilometers in length, also covers a large bus station, sidewalks, drainage system, and streetlights.

In addition, KUTEI also built a small underground canal for drainage to address the problem of waterlogging. The changes are evident in a smoother traffic flow. “The canal hedges against water flow from Kart-e-New and Syah Sang areas,” says Khush-hal Saleh, a civil engineer with KUTEI.

He explains that during spring and autumn, a large volume of water flowed down from Kart-e-Naw hill and the surrounding area into the streets, where about 40 to 50 cm of water collected. “The residents could not easily walk across these streets because of this,” he says. “The side drains were completely blocked and did not have the capacity to manage the water flow. We have managed to solve these problems.”

Positive Impact on Commuters and Residents

A satisfied commuter is Abdul Samad, a taxi driver, who finds the quality of his working life greatly improved. “During the eight years of driving my taxi, I haven’t come across a road so smooth and bump free,” he says. “Before we had many problems—it was constantly jammed, the road was uneven, and there was a lot of mud. It used to take me one hour to come from downtown to Kart-e-Naw, but today I came within five minutes. I spend less on fuel and I save time. Of course, I am very satisfied.”

KUTEI’s work has benefited not just commuters but also residents. Faridoon, 45, a resident of Kart-e-Naw, points out the many positive effects of the rehabilitation. “In the past, the road was muddy and dusty. All our clothes would get dusty but now they stay clean,” he says. “Also, now that the road is paved, most importantly, traffic accidents have decreased.”

Having spent his childhood playing in the dusty and unpaved roads of the locality, the modernization makes it exactly the kind of place Abdul Bashir wants his children to grow up in. This one road has revived business, eased movement, and made the locality a much better place to live in.