Hurricanes can turn back the development clock by years 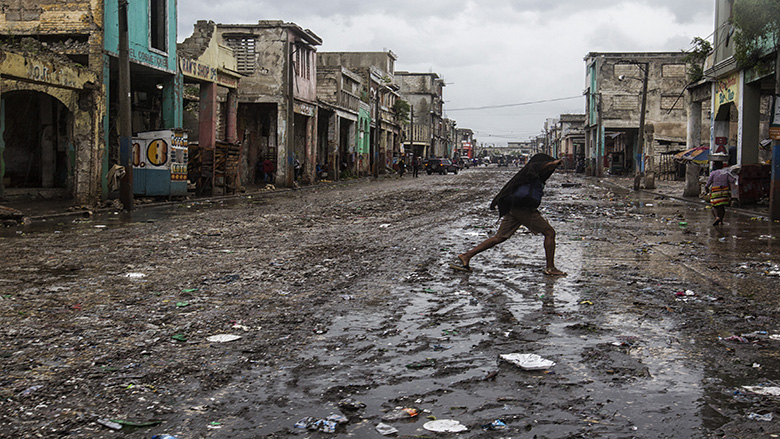 A street in Port-au-Prince, Haiti, after Hurricane Mathew.

The everyday names of Hurricanes like Irma belie their unprecedented fury and ability to claim not just human lives, homes, bridges and roads. The silent and barely visible victim of these extreme weather events is, increasingly, human and social development.

World Bank studies indicate that some 26 million people - the equivalent of the combined population of Chile and Bolivia - fall into poverty each year due to natural disasters.

No one can stop a hurricane or earthquake, but there are ways to minimize their impacts, as disaster risk management expert Joaquin Toro explains in the following interview.

Q: It is very early to talk about impacts beyond what you see in the media, but could you give an overview of the potential economic and social impacts of hurricanes like Irma on the development of affected populations?

A: This is a very important point. Disasters impact the poor much more than the rest of the population. The poor have much lower resilience capacities than other sectors of the population. We have seen recent studies by the World Bank indicating that disasters are pushing some 26 million people into poverty each year. This is because some live in high-risk areas and have little capacity to recover from disasters. It is something we are working on, but where much remains to be done.

As for the economic cost, it is very difficult right now to calculate an exact number, but historically hurricanes have cause a great damage in the Caribbean. For example, in 1979, Hurricane David caused damages of over 117% of GDP in Dominica. Hurricane Ivan, in 2004, caused losses in excess of 200% of GDP in Grenada. That is enormous – in just a few days, countries can lose more than the income of an entire year.

Moreover, severe disasters had a direct and considerable impact on economic conditions through issues like reduced productivity and budget deficits, or increase in national debt due to reconstruction costs. And, as we saw with Hurricane Mitch in 1998, this caused 30 years of decreased development in countries like Honduras and Nicaragua.

Q: You said that you are working on this, does it mean that countries have improved resilience to natural disasters, especially in the Caribbean and Central America?

A: Yes. The Central American and Caribbean countries have made significant progress in improving their disaster risk management capabilities, but remain fiscally vulnerable to disasters. Most countries have enacted legislation to create multi-sectoral disaster risk management platforms. They have developed policies and created coordination institutions to enable more efficient systems of emergency management and early warning. Contingency plans are important, but these plans need to be clear, not just at the government level, but at the local level. We see great differences, for example, with logistical capacities in the United States following Irma, where millions of people were evacuated. In developing countries, we still cannot evacuate the entire population. Early warning systems are very useful, but reaching the end of this chain is a little more difficult.

Q: What infrastructure is most vulnerable when we talk about these extreme phenomena?

A: Generally, the most vulnerable infrastructure is the poorest. For example, in the Caribbean, between 60% and 70% of construction is informal. The photos we have seen of Barbuda, especially, show us that the houses have been largely destroyed. In general, this is very vulnerable infrastructure. You can also see the lack of building codes in other structures such as communication towers.

Q: Is Latin America one of the regions most exposed to disaster risk? How can you incorporate a risk management plan into your development agenda with the most urgent priorities to help minimize the impact?

A: This is a challenge that not only the Caribbean islands face but all developing countries. There are a lot of basic needs that they have to cover. Risk management is not a parallel activity, but one that must be present in all sectors: health, housing, education, among others, so that we can make schools safer, for example, or health centers that we can use after disasters, or roads that do not cause flooding.

One of the things that these countries need to do is, on the one hand, stop creating new risks through more orderly planning and incorporating information from these natural events. On the other hand, they need to more systematically reduce the risks that exist today, not only by responding to the emergency, but by using financial protection mechanisms to help speed recovery. It is worth remembering that more than 80% of the population in Latin America lives in urban areas, which increases the exposure to risk.

Q: Could you explain what those financial 'disaster protection mechanisms' are?

A: The work of development finance institutions covers many areas related to the challenges caused by natural hazards and the effects of a changing climate.

In the World Bank case, we focus on five areas:

An example of a financial protection tool facilitated by the World Bank is the Caribbean Catastrophe Risk Insurance Facility (CCRIF SPC).

This is a parametric insurance mechanism that provides payments to help member countries finance their initial disaster response once certain conditions are activated. In this way, it helps to solve the short-term cash flow shortage that small developing economies suffer immediately after major natural disasters. For example, as a result of Hurricane Irma, this mechanism came into effect last week for the governments of Antigua and Barbuda, Anguilla and St. Kitts and Nevis, for an estimated US $ 15.6 million.