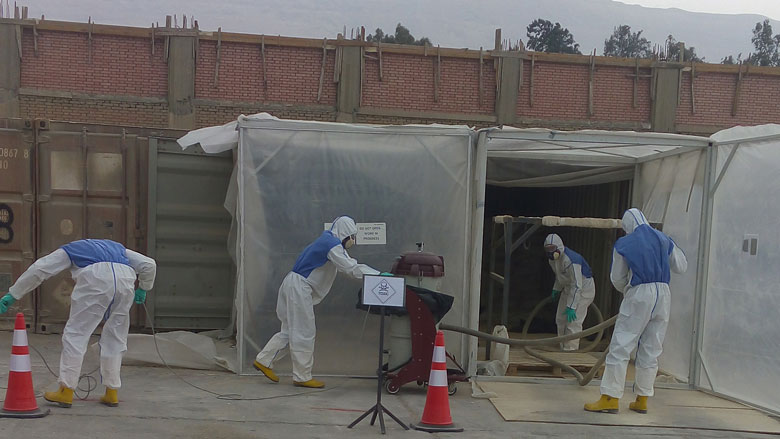 This month, 220 tons of the toxic pesticide lindane has been shipped to France for safe disposal in a high-tech incinerator. The dangerous cargo has been stored for 19 years in a commercial port in Egypt.

In 1998, containers of lindane arrived at the port of Adabiya in Suez Governorate through a company that was found later to be a fake. The containers were abandoned in the transit area of the port.

Located on the western side of Gulf of Suez, the port of Adabiya, 17 km from the City of Suez and 125 km east of Cairo, receives cargo ships that unload goods to be temporarily stored in a transit area before being re-transported.

Lindane is a pesticide whose use is severely restricted by the 2001 Stockholm Convention on Persistent Organic Pollutants (POPs). These substances are very hazardous to human health and damaging to the environment, since they are highly persistent, taking many years to decompose.

The 220-ton cargo has since turned into a legal case, investigated several times by various bodies, including the Egyptian State Ministry of Environment.

The disposal of the lindane stock is being carried out under Egypt’s Sustainable Management of Persistent Organic Pollutants (POPs) project. The project’s aim is the improved management and safe disposal of stockpiles of targeted POPs and another class of dangerous chemicals, Polychlorinated Biphenyl (PCBs) used in electrical equipment, like transformers. The project got off the ground in 2014 with a $8.1 million grant from the World Bank’s Global Environment Facility (GEF). The government of Egypt contributed about $15 million in financial and logistical support.

Egypt signed a contract with an international company specialized in the safe disposal of such pollutants. Under the contract, the company analyzed samples of the cargo at the port of Adabiya to confirm its content. Then, it re-packaged the cargo in accordance with the highest international standards, as well as United Nations specifications, and placed it in tightly sealed containers, to be shipped to France and burnt in special furnaces.

The transfer of the lindane shipment to France has been carried out in accordance with the requirements and procedures of the Basel Convention on the Control of Transboundary Movements of Hazardous Wastes and their Disposal. The convention requires the exporter to obtain transit permits from the countries through which the shipment will pass (including the waters of the countries on the Mediterranean Sea), and the final destination, before starting the shipment. The company had received all such necessary permits before the transportation took place.

"The process has been carried out in accordance with the highest international standards, European requirements and Egyptian national legislation," said Katelijn Van den Berg, Environmental Specialist at the World Bank and team leader from World Bank’s side. "Following the re-packaging, transport and disposal of the lindane shipment, other POPs stored in other sites will be disposed of. Samples of these materials are being analyzed for re-packaging and safe disposal."

Such pollutants affect the human nervous system as well as the human genetic makeup. Exposure can cause birth defects as well as cancers, and vary from one substance to another of the 27 items in the POP list. These effects depend on the duration of human exposure to the substance and the concentration of the substance during exposure. These substances do not decompose in water, but become concentrated in animals’ fatty cells. In the case of human consumption of such animals, these stored POPs move into the human body.

These pollutants are characterized by their persistence. They decompose extremely slowly, and can therefore remain in the environment for tens of years.

"This step comes within the framework of the protection of the Egyptian and global environment from such pollutants, and in accordance with Egypt's commitment to international conventions and treaties in this regard, including the Basel Convention on Hazardous Wastes and the Stockholm Convention on Persistent Organic Pollutants," said Eng. Ahmed Abdel Hamid, manager of the project implementation unit of Egypt’s State Ministry of Environment.

The wider project aims to safely dispose of about 1,000 tons of abandoned pesticides, which have been taken out of use either due to the expiry of their validity and their permit issued by the Ministry of Agriculture, or as a result of confiscation of smuggled cargoes. The project also includes the safe disposal of 1,000 tons of PCBs in electrical transformer oils at Ministry of Electricity sites. The transformers, produced before 1985, used additives to their oils to improve their efficiency. Later, however, those additions have found out to contain PCBs, also banned under the Stockholm Convention.