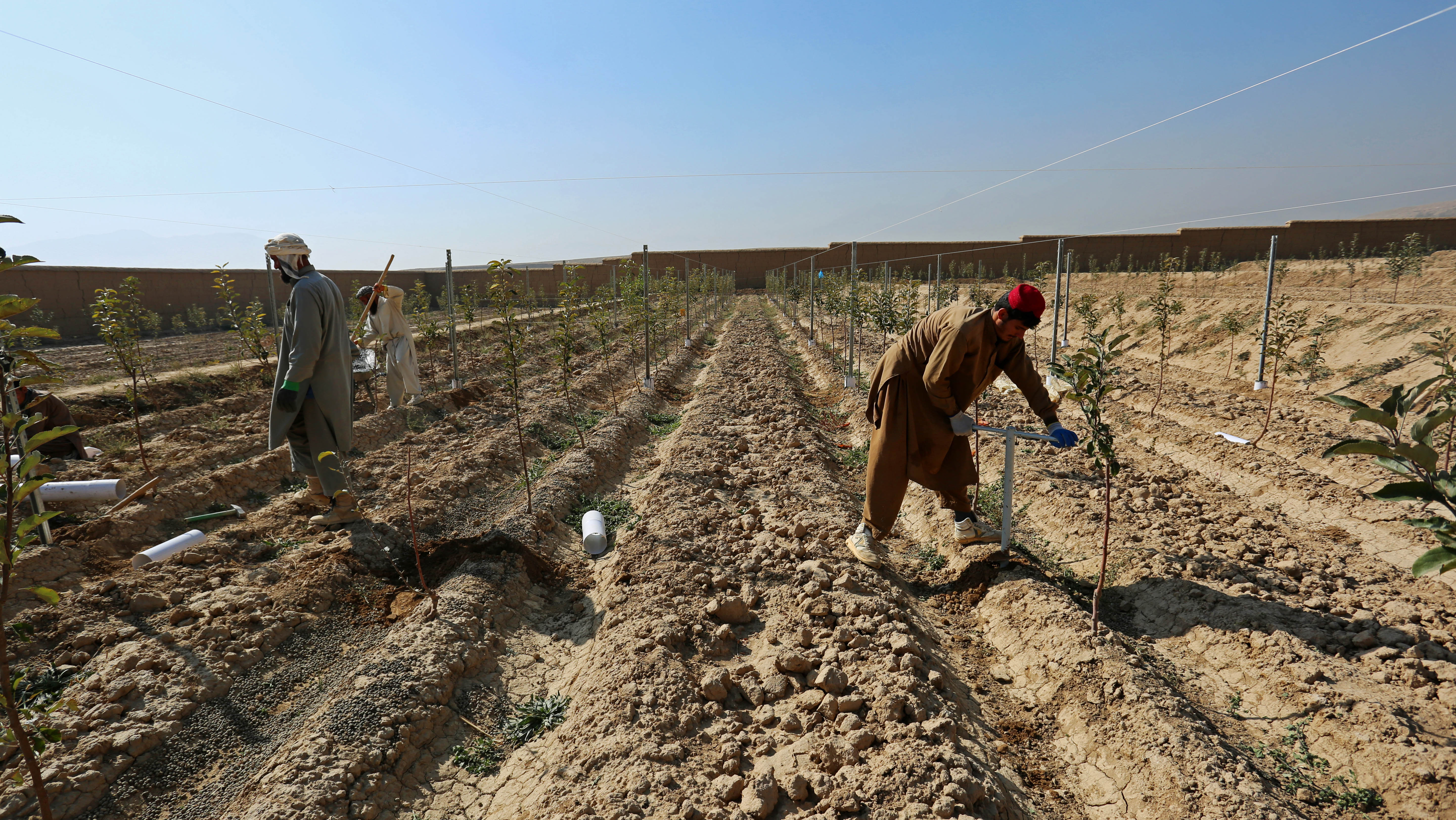 Farmers prepare to irrigate an orchid. Last year they managed to sell one year’s harvest from the trees planted. The demand was good and people praised my apples for their color and taste.

PAGHMAN DISTRICT, Kabul Province – The pipe gurgles with cool fresh water on this warm sunny day, while the solar water pump hums in the background. A farmer is singing softly as he waters the newly planted trees in his apple orchard. Two laborers laugh and joke as they dig to soften the earth around the trees.

Farmer Abdul Azim, 27, is able to irrigate his orchard in Zarshakh village, thanks to the recently installed solar water pump. Zarshakh, home to nearly 1,000 households, is one of the most water deficient villages in Paghman district in eastern Kabul Province. While residents derive most of their income from horticulture, they were hardly ever able to enjoy fresh farm produce themselves. Some families like Abdul Azim’s maintained small farms mostly limited to subsistence agriculture.

In March 2016, the National Horticulture and Livestock Project (NHLP) dug a water well and installed the solar water pump for Azim. The project was completed in a short period and by June 2016, the water pump was up and running. The total cost was around 670,000 afghanis (about $10,000), of which NHLP covered 75 percent while the rest was paid by Azim.

“We used to spend 300,000 afghanis (about $5,500) in any given year to buy fuel for generators to power pumps to get water for our farmland,” Azim says. “With the installation of the solar water pump, I saved all that money and yet, for the first time in my village, I had enough water for irrigation.”

The installation of the solar water pump has helped Azim expand his farm from 1.4 to 2.4 hectares. “Before the solar pump, most of my farmland lay barren. I did not even have vegetables on my table regularly,” he says. “But in these six months, I not only have vegetables, I have enough to give to my neighbors too.”

In addition to the solar water pump, NHLP also helped Abdul Azim establish two new apple orchards with a total of 888 saplings. He expects to earn more money from this new venture. “NHLP trees grow faster than traditional ones and bear fruit in their second year,” he explains. “Already I have managed to sell one year’s harvest from the trees planted last year. The demand was good and people praised my apples for their color and taste.”

"Our horticulture system has been completely transformed from traditional to modern. "
Akhtar Mohammad
Farmer, Paghman district

NHLP operates under the Ministry of Agriculture, Irrigation and Livestock (MAIL). With a $190 million grant support from the Afghanistan Reconstruction Trust Fund (ARTF), NHLP is working toward the overarching goal of increased productivity and overall production of horticultural products. NHLP activities have three components: horticultural production, animal production and health, and implementation management and technical assistance. It began national activities in April 2013 and its work will run through the end of 2020.

The project aims to promote adoption of improved production practices by target farmers, with gradual rollout of farmer-centric agricultural services, systems and investment support across the country. Its horticulture activities are currently implemented in about 300 districts in 31 target provinces, numbers that may grow as conditions warrant.

NHLP covers 14 districts in Kabul Province. In 2016, the project established more than 8,000 jeribs, or 1,600 hectares, of new almond, apple, and apricot orchards, built 84 raisin drying houses, and 35 irrigation reservoirs. To date, 17 water wells have been dug and 12 solar water pumps installed for farmers who faced water shortage. “Our activities have helped farmers in Kabul and their produce can now compete with imported fruits in Afghanistan,” says Baryalay Momand, NHLP’s provincial coordinator for Kabul.

NHLP’s activities have been transformative. The project has introduced and educated local farmers on new varieties of fruit and systems of horticulture. In 2016, the project established over 700 jeribs, or 140 hectares, of apple and almond orchards in Paghman district. “We have learnt a lot from NHLP,” says farmer Akhtar Mohammad, 67. “Our horticulture system has been completely transformed from traditional to modern.”

He is not alone in his enthusiasm, most of the farmers in the district praise the project. “Horticulture is the root of our economy. Three years ago, we sold our apples for very low prices,” says Mohammad Zarif, 48, a farmer from the district. “Ever since NHLP came here and taught us marketing and best horticultural practices, we are earning much more.”