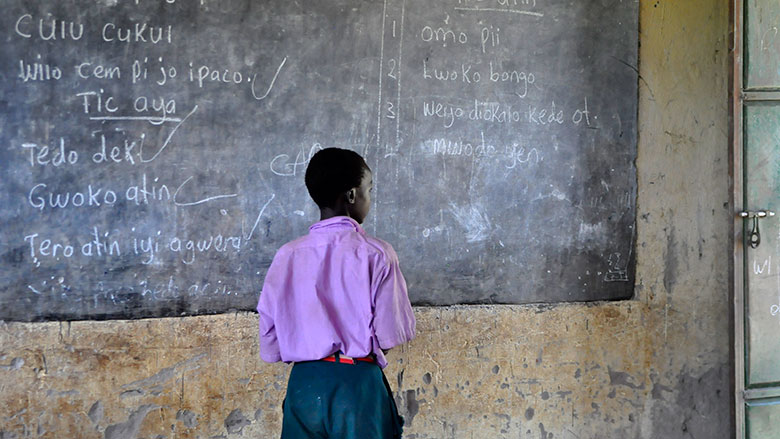 KAMPALA, August 21, 2017 - On a typical morning in elementary (primary) schools across Uganda, children can be heard chanting letters of the English alphabet, each letter assigned to a common item found around the home, followed by its vernacular word to help with association and memory. “Axe, Banana, Cup, Drum,” they sing, working their way down the chart.

This is the way generations of Ugandans have been introduced to learning.

“That is learning English as a language,” says Caroline Kavuma, an early-grade reading specialist with Uganda’s Ministry of Education. While it may be easy for children to learn English, she adds, it is more difficult for them to use it to learn other academic subjects, especially when they use a different language at home.

When Uganda rolled out free Universal Primary Education in 1997, and later Universal Secondary Education (sending enrolment through the roof), its first challenge was to find the space, teachers, and resources for all its students. The World Bank approved its first ever combination grant/credit to help keep the classrooms open.

The Uganda Education Sector Adjustment Operation extended a US$75 million grant and an $80 million interest-free loan to the country, specifically to make sure the resources were available to sustain the exponential increase in enrolment.

But, unfortunately, while universal access to education has improved, quality has declined. A 2016 learning assessment survey by Uwezo found that only three in 20 students in Primary 3 (Grade 3 equivalent) could read and comprehend a story. The report added it was only by P5 that about half the children could “read and understand a short P2 level story in English.”

Meanwhile, a USAID-funded pilot program, School Health and Reading Program (SHRP), found children could read and comprehend better if taught in their first languages. This is now part of the primary education school curriculum. Children are taught in local language during the first three years of primary education before transitioning to English in the fourth grade.

“Children need to be taught in the natural way they learn,” Kavuma explains. “They learn concepts faster, and have accumulated enough vocabulary in their home language, to learn in a sophisticated way.” 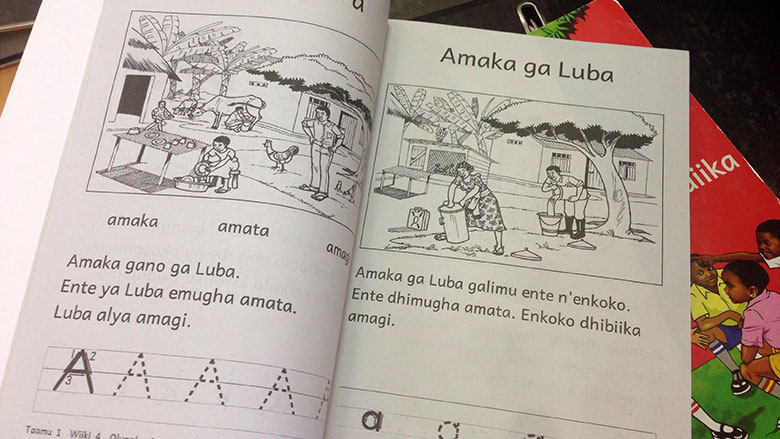 A textbook in Lusoga, one of the languages spoken in eastern Uganda. Photo: World Bank

The Early Grade Reading Model was started, with the production of reading materials, through a collaborative effort with communities. Boards of local elders, community leaders, and educationalists were formed to develop orthographies where there were none.

Having supported Uganda with quantity in schools, the Bank has followed up by financing the Global Partnerships for Education with a US$100 million grant under the Uganda Teacher and School Effectiveness Project (UTSEP).

The project started in March 2015, its objective to improve the effectiveness of the public, primary education system. It trains teachers in the Early Grade Reading model and helps with the distribution of materials it has developed.

Focusing on teachers, the project has trained about 3,600 P1 teachers, 2,560 P2 teachers, and 26,080 head teachers in how to reach the learner best. “The teachers need to be supported and trained so that they are able to question their methodology when performance drops, instead of blaming the child,” Kavuma says.

It hasn’t been all plain sailing. For a start, there are many vernaculars. For example, in Busoga, east of Kampala, it is not uncommon for children in the same area to speak different dialects or languages altogether.

Converting parents also takes time. “It is difficult to convince a parent that learning [other subjects] in English is not the most efficient way for the children in P1,” says Moses Wambi, the deputy principal of Bishop Willis Core Primary Teacher College in Iganga, and a focal person for the project in the area. “But we will be able to see the results in good time.”