To Be Indigenous and a Citizen of Latin America 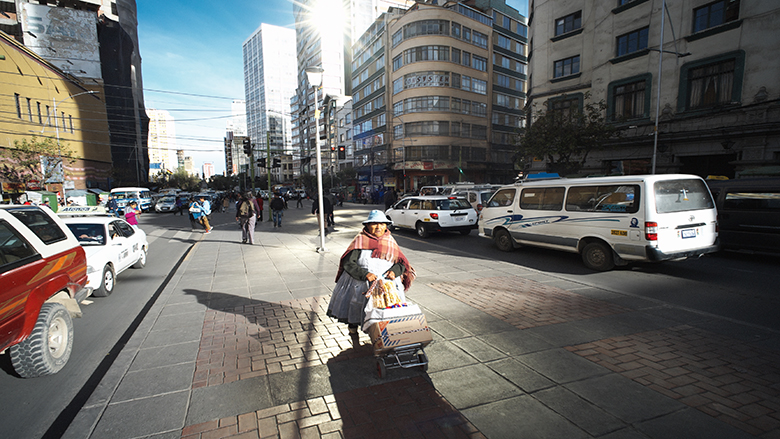 Nearly half of the members of Latin America’s indigenous communities live in cities, but they still face many disadvantages

What do we think of when we imagine an indigenous person of Latin America? What’s he or she like? In what environment do we put them? Doing what? Most likely our image includes a canoe or a cabin. A setting without cement or traffic lights. Picturing them crossing a city street is not likely to be the first thing that comes to mind.

But the reality is that 49% of Latin America’s indigenous population has migrated to urban areas in recent decades. “The very idea of an indigenous urban dweller challenges our collective representation of what ‘being indigenous’ means,” World Bank social development expert Germán Freire, points out in the interview below.

With the International Day of the World's Indigenous Peoples coming up on August 9 and the 10th-anniversary celebrations of the United Nations Declaration on the Rights of Indigenous Peoples, adopted on September 13, 2007, the time is ripe for us to discuss this challenging issue.

Question. Why did so many Latin American indigenous people migrate from their traditional lands to the cities?

Response. For several reasons. In many cases, they migrated for the same reasons all Latin Americas do. The cities offer more job opportunities and access to education, health and basic services. In Peru, for example, an indigenous household has a 37% greater chance of being poor if it is in a rural area.

But access to education and health seems to be the dominant factor. While primary school coverage sharply increased over the past decade, significant gaps remain, especially at the level of secondary and tertiary education. Additionally, there continue to be serious deficits in rural health services. Often only the most basic services are offered or they are offered in ways that hinder access.

Indigenous lands have also come under constant pressure due to expanding agriculture frontiers and extractive industries. For example, a fifth of the Amazon region has mining potential and 20% of these areas of potential exploitation are on indigenous lands. Internal conflicts have also disproportionately affected rural indigenous communities in Guatemala, Colombia and Peru.

Q. What challenges do Latin American indigenous people face when they decide to migrate to the cities?

R. The situation of indigenous peoples in the cities is paradoxical because, although they are generally better off than in their native areas, they also enter the urban context under extremely unfavorable conditions. Their traditional knowledge and practices are not valued in the urban labor market, so they tend to hold poorly paid jobs in the informal sector, with all that this implies in terms of the lack of job and economic security.

All of this poses a major challenge for governments and development agencies because often policies for inclusion and service delivery specifically tailored to the indigenous population were designed with rural communities in mind. The very idea of an indigenous urban dweller challenges our collective representation of what “being indigenous” means.

So cities offer numerous opportunities for indigenous peoples, but the flipside of these migrations is that these peoples are exposed to new forms of exclusion and discrimination. The region must step up efforts to develop strategies to close labor, education or housing gaps, for example, without affecting these peoples’ identity or culture. A World Bank study found that a sense of dignity is essential for the success of social inclusion policies.

Q. What role do indigenous women play in the urban context?

Despite these gaps, indigenous women play a key role in urban environments. They are bearers of knowledge. For example, they know about traditional medicine. They are also an anchor for children, with their own culture and languages. They are businesswomen who combine aspects of their traditional economies - such as solidarity and bartering - with market aspects.

But equally important is their growing participation in public life, in decision-making at the local, national and regional levels. A noteworthy example is that of the Wayúu of the Guajira Peninsula, who hold government, academic and other positions on both sides of the Colombian and Venezuelan border. Women are the axis around which all Wayúu family decisions revolve, and naturally they have taken this role with them to cities such as Riohacha or Maracaibo.

Q. How can indigenous peoples contribute to urban development?

R. In many ways. Indigenous peoples bring with them alternative views of social organization, organization of space, of relationships with the environment, containment strategies, knowledge of traditional medicine, forms of political participation, architectural proposals, languages, etc. This diversity greatly contributes to the resilience of the urban environment.

El Alto in Bolivia is a well-known example of the potential of the city to express indigenous forms of organization and participation in government. Through Neighborhood Boards, the Aymara have not only led efforts to build and administer their urban environment but have also become key political actors at the national level.

A less well-known example is in the cities of Buenos Aires and La Plata. Few people know that most of Argentina’s indigenous population is concentrated there, approximately a quarter of the national total. In La Plata, the Nam Qom Community in the Islas Malvinas neighborhood is a wonderful example of dignity and the struggle to improve their inclusion in the urban environment. With little or no outside support, this community has built its own homes, organized community spaces according to their views on solidarity and co-existence, taken collective responsibility for the feeding and care of their children and developed school and extra-curricular initiatives to preserve their language and culture, among other activities. There are many examples like these throughout Latin America but they have received so little attention that they remain largely invisible.

This is precisely the major challenge in fostering their inclusion. We have limited knowledge of the needs and opportunities of the urban indigenous population since this topic was not on the region’s development agenda until very recently. Last year’s report Indigenous Latin America in the Twenty-First Century is a call for us to begin thinking about the indigenous population in terms of its diversity. The development models and analytical tools we use today to address their needs and demands do not incorporate the reality that half of the indigenous peoples of the region lives in urban environments, or the fact that there are multiple, overlapping dimensions of exclusion. It is not the same thing to be an indigenous man as it is to be an indigenous women, child or elderly person, for example.

I believe that including indigenous peoples in urban development will benefit all of us. In some cities, indigenous peoples make up a considerable share of the population. They have much to contribute to the local economy, to decision-making, to identifying solutions to critical problems of our cities, such as the sustainable use of resources or citizen participation. The region’s greatest treasure is its diversity. It makes sense to include this kaleidoscope of visions and proposed solutions in the urban development of the region.