Skip to Main Navigation
This page in:_
FEATURE STORY August 7, 2017 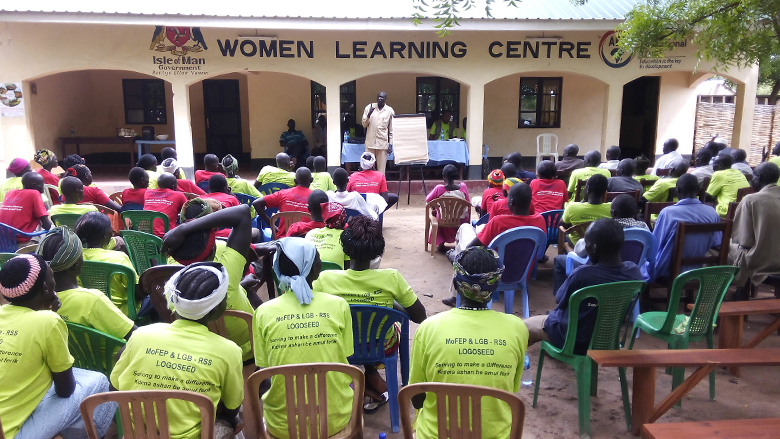 Rumbek Town, South Sudan, August 07, 2017—In 2016, when his brother was killed, Stephen Makoi’s reaction was not what people expected it might be. Makoi went to the killer’s house, asked for a glass of water, and had a chat with him, something that he continued to do for several more days. His actions confused and frustrated not only his grieving family, which wanted revenge, but also the killer’s clan, which grew suspicious of his intentions.

Makoi hails from Amongpiny payam, one of the areas of South Sudan where inter-communal conflict has resulted in thousands of deaths and much suffering. His response to his brother’s murder was his way of restraining his own clan from retaliating, thus preventing further bloodshed. It also facilitated the suspect’s eventual detention by law enforcement agents, allowing a normal judicial process to take place. “I did this because I wanted to teach my people we can handle such things differently,” Makoi explains.

Makoi credits the nature of his intervention to his involvement with the World Bank Group Local Governance and Service Delivery Project (LGSDP), which was designed to strengthen local governance. By using a Community-Driven Development (CDD) approach, the project integrates governance, service delivery, and peacebuilding and community participation.

Makoi admits that, at first, his decision not to seek revenge made it hard for him to be taken seriously in his capacity as elected chair of his payam (community) for Rumbek Central County.

However, Jonas Njelango, the Project Manager with ACROSS, the Bank’s partner in this project, has observed the transforming effect the project has had on the dynamics of conflict. Njelango believes perceptions and behavior are gradually shifting away from conflict as participation in local development grows. “The fact that this issue did not escalate into conflict is, in itself, a big deal,” he says.

Launched in 2013, the LGSDP is implemented in seven of ten of the original states of South Sudan. In the former Lakes State, it operates in what was Rumbek East, Yirol West, Wulu, and Rumbek Central counties.

The local governance and service delivery project means communities take part in planning at payam and boma (county) levels. This allows committees to identify their priorities in terms of the development projects they want, which are mainly small infrastructure projects funded through payam grants and subsequently integrated into county development plans and budgets.

But the process also serves to support conflict resolution.

“What we have learned is that the way people prioritize their needs cannot just be done at random,” says Makoi. “People must debate and vote for what they want. This formula has helped our communities deal with many issues in a peaceful and constructive way.”

The LGSDP program typically kicks-off with events where communities analyze the roots of their conflicts, and identify their local resources, before prioritizing their development needs. The recurrence of communal conflict in South Sudan makes conflict mapping essential to local government planning.

“When we carry out conflict analysis, we start by asking them about the issues that affect their community,” says John Malou, Rumbek Project Officer for the LGSDP with ACROSS. “They respond by initially listing many problems driving conflict, such as livestock thefts, the elopement of girls, and armed robberies. After this, we take them through deeper analysis, where they isolate key drivers of conflict and suggest ways of addressing them.”

Security priorities that emerged from the LGSDP methodology were presented to policymakers at the Joint Governor’s Forum in November 2016.

In keeping with community demands for the reduction in guns, the forum resolved to encourage the voluntary disarmament of civilians. “The voices for disarmament have come from communities themselves,” Malou says.

Pamba Emmanuel, the Lakes Project’s State Coordinator, says many people are no longer armed. Community engagement is also promoting interdependency and interaction, says Pamba, who sees perceptions shifting from the violence and revenge killings that had uprooted many families.

“We strongly link our development activities to the need for a peaceful environment,” he says. “With community engagement, some communities got to interact with each other for the first time. This has allowed them to have a unanimous voice with respect to the type of services they want.”

James Biith, a local development committee chairperson in Jiir payam, says that before LGSDP, three payams—Amongpiny, Jiir, and Matangai—were constantly fighting. “For a long time, we could not come together and sit next to each other like this,” he explains. “You could not even sit for 15 minutes without hearing gunshots. The project talked to all of us equally and eventually brought us together.”

The two youths met for the first time in four years at a LGSDP planning event in Rumbek town. Their last encounter had been a violent one, with Mangeth having shot and wounded Matur during a quarrel at a shared, seasonal, pastoralist cattle camp.

Mangeth and his clan avoided Jiir payam for fear of retaliation. Their accidental encounter at a LGSDP forum caused fear of a renewed feud. However, to everyone’s surprise, that did not happen.

“When I saw Mang’eth, we greeted each other and talked like old friends,” explains Matur. “The people around us wanted to know how we had reconciled. We had been able to do it because of the training we received as community representatives in the project. The training opened our eyes.”

Stephen Makoi, the man who lost his brother just last year, believes the local committees have, over time, gained respect.

“When people see you wearing the LGSDP tee-Shirt and they have problems amongst each other, they come to you,” he says. “We do what we have been trained to do: if someone is a killer, we address the matter quickly by catching him and taking him to the police.”

Then they sit down and mediate the dispute.