The Global Gas Flaring Reduction Partnership (GGFR) today released flaring data for 2016, showing an overall increase in global flaring from the previous year, largely caused by negative developments in only a few countries: Iran, Russia, and Iraq. Satellite estimates show 149 bcm of associated gas was flared at oil production sites across the world, an increase of 2 bcm from 2015.

Satellite data shows an increase in flaring in Iran of more than 4 bcm, in Russia nearly 3 bcm, and more than one bcm in Iraq. Russia’s flaring relative to the size of its oil production is close to the global average; the two other countries have a higher flaring intensity.

Flaring in the United States decreased from about 11 bcm to less than 9 bcm in 2016, mostly at shale oil developments in the Bakken formation in North Dakota and Eagle Ford and Permian formations in Texas.

In the rest of the world, gas flaring has moderately declined in the past two years while oil production levels have remained unchanged.

“Since the additional flaring is mostly caused by an uptick in oil production at existing oil production sites, one could conclude that increasingly governments and oil companies are ensuring new oil fields are developed without routine flaring,” said Bjorn Hamso, GGFR’s program manager.

In 2015 the World Bank and several governments, oil companies, and development institutions launched a global initiative that commits endorsers to not routinely flare associated gas in new oil field developments and to end routine flaring at existing oil production sites by 2030. The “Zero Routine Flaring by 2030” Initiative has now been endorsed by 71 governments, oil companies, and development institutions. Together, they represent about 54% of global gas flaring. 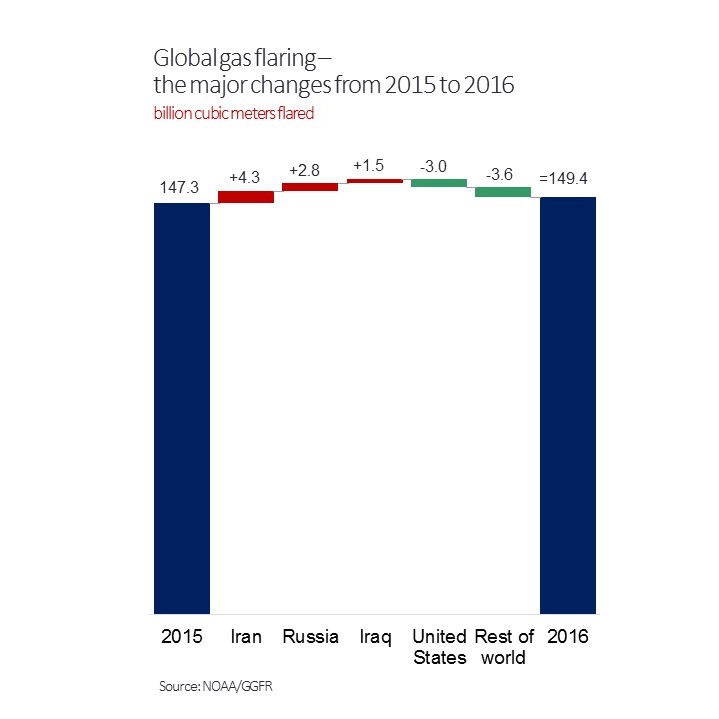