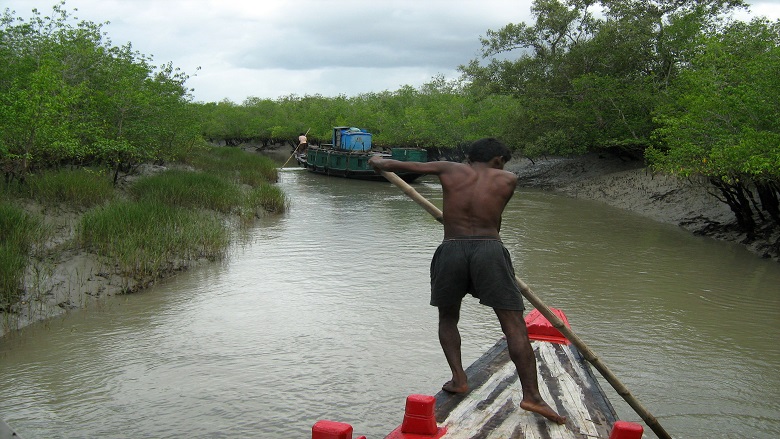 Southwest coastal region of Bangladesh is already facing increasing salinization, especially between October and May. Laboratory analyses of water and soil samples show an increase of salinity over time in the region. Climate change induced sea-level rise will further intensify the problem of river and soil salinization.

Recent World Bank studies predict the progressive salinization of water and soil in a changing climate will significantly impact the UNESCO World Heritage Site Sundarbans' fragile ecosystem and affect the surrounding poor population. Increased water salinity will alter the aquatic ecosystem and the mangrove forest, along with significant shortages of water for drinking and irrigation in the southwest coastal area, while soil salinization is likely to lead to a significant decline in the output of high-yielding-variety rice.

Quantifying the impacts of increasing salinity from climate change on Sundarbans

Climate change, in addition to natural factors and human activity induced consequences, will have significant implications for the present and future management of the Sundarbans as well as the forest-dependent livelihoods of the surrounding poor inhabitants.

To assess impacts of salinization on mangrove species and the fish habitats, recent World Bank studies used state-of-the-art salinity profiles of the region, high-resolution vegetation maps and information on availability of fish.

Changing pattern of vegetation in Sunderbans:

The study predicts significant losses for Sundri and Passur-Kankra, along with gains for Gewa, Baen and Goran. The stock of Sundri, the most valuable timber species in Sundarbans, has been declining over time due to natural causes such as “top-dying-disease’ which has killed millions of trees since 1970. Climate change is likely to worsen this depletion of Sundri stock through increased salinity. The analysis compared the different salinity tolerance ranges for 14 varying dominant mangrove species detected in 2013 satellite images of Sundarbans with the expected salinity for alternative scenarios of climate change by 2050.

Increasing salinity is likely to adversely affect the reproductive cycle and capacity, extent of suitable spawning area, and the feeding/ breeding/ longitudinal migration of freshwater fish species. This will lead to striking loss of habitat of freshwater fish in the western part of the Sunderbans, along with modest gains in expansion of brackish water (saltier than freshwater but not as salty as sea water).The analysis looked into the salinity tolerance range of 83 fish species typically found in the region with expected location-specific water salinity resulting from climate change by 2050.

" Despite the widely-acknowledged, treaty-protected ecological status of the Sundarbans, concerns related to climate change and growing salinity have not yet been incorporated into regional management protocols. Therefore, understanding the physical and economic effects of salinization and planning for appropriate adaptation will be critical for management of the Sundarbans, as well as for long-term development and poverty alleviation in adjacent areas. Our research is a step forward in that direction. Since changes in the Sundarbans' ecosystem induced by rising salinity are likely to change the prospects for forest and fishery-based livelihoods, resources should be directed to the development of alternative livelihoods for ecosystem-dependent households.  "

What it means for the inhabitants of the Sundarbans

The 2010 poverty map of Bangladesh identifies a high incidence of poverty in the region near Sundarbans, where 9.9 million poor lives, including 5.9 million living in extreme poverty. As these people largely rely on forest and fishery-based livelihoods, and fish supply a significant portion of their dietary protein, climate change induced salinity will impact the poor, in a number of ways: