Afghanistan’s Sluggish Growth: The Inextricable Link Between Security and Development 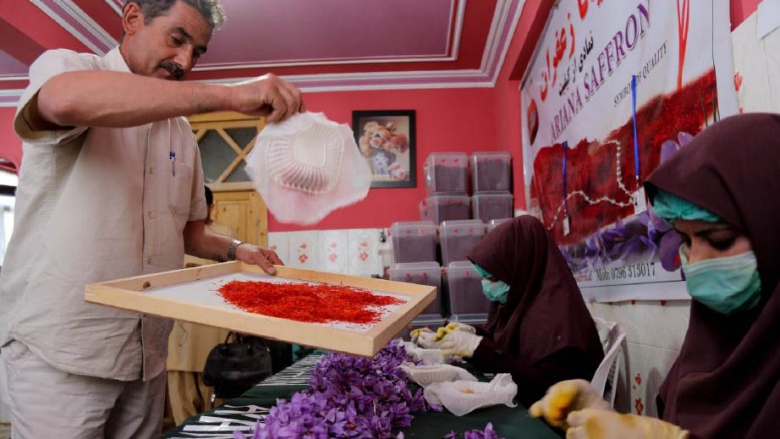 World Bank
The Afghanistan Development Update October 2016 explores the inextricable link between security and development in Afghanistan, demonstrating that the poor security environment is continuing to exert a significant constraint on confidence, investment, and growth.

Afghanistan’s economy is experiencing the most sustained period of slow growth since it emerged from the conflict in 2002. The October 2016 edition of the Afghanistan Development Update explores the inextricable link between security and development in Afghanistan, demonstrating that the poor security environment is continuing to exert a significant constraint on confidence, investment, and growth.

According to the Update, Afghanistan’s economic growth rate stood at only 0.8 percent in 2015, reflecting a decline in agricultural production and slow growth in industry and services. The level of investment in the first half of 2016 was low, with agricultural production expected to remain poor. In 2016, growth is expected to reach only 1.2 percent, despite progress with a number of initiatives, including Afghanistan’s accession to the World Trade Organization and the opening of the Chahbahar port in Iran, which has excellent potential as an alternative trade route.

With the economy growing at a significantly lower rate than the population, poverty is expected to have increased in 2015, with further increases expected in 2016. The Afghanistan Development Update states that economic growth is expected to gradually accelerate, increasing from 1.8 percent in 2017 to 3.6 percent in 2019. However, stronger growth in out-years is predicated on improvements in security, political stability, reform progress, and continued high levels of aid.

The fiscal situation remains stable, as presented in the Afghanistan Development Update. Revenue collection performance improved significantly in 2015, with domestic revenues reaching 10.2 percent of GDP. This strong performance has continued into 2016, with domestic revenues collected in the first 8 months of 2016 30 percent higher than in the same period last year. This increase is largely the result of improvements to tax administration and the implementation of new policy measures. 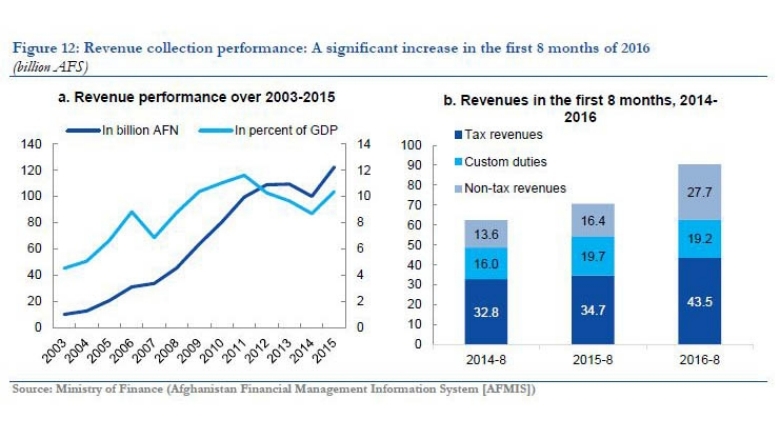 " The Afghanistan Development Update states that economic growth is expected to gradually accelerate, increasing from 1.8 percent in 2017 to 3.6 percent in 2019.  " 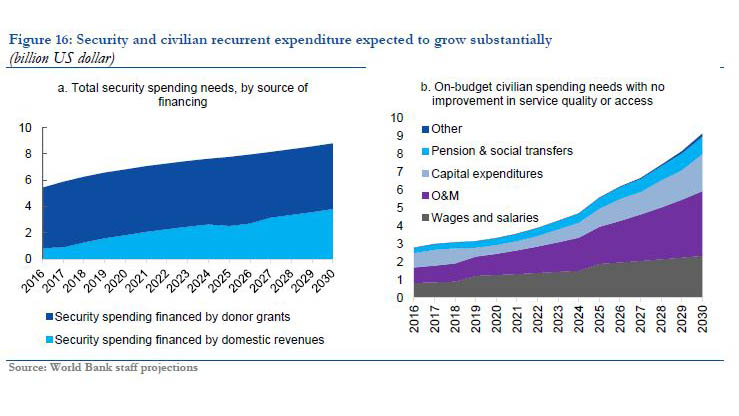 The NATO Warsaw Summit in July 2016 and the Brussels Conference on Afghanistan in October 2016 both resulted in new pledges of security and development aid to Afghanistan for the next four years, with the sustained high levels of international support signaling confidence in Afghanistan’s development prospects and in the progress the Government has made towards achieving reforms. However, as the Update argues, realizing substantial development gains over the next four years with the pledged levels of aid will require major efforts by both the international community and the Government.

Throughout the year, civilian casualties have remained at elevated levels and the number of Internally Displaced People (IDPs) is increasing, placing strains on the capacities of government agencies at all levels. Thousands of refugees are returning from Pakistan and, in lower numbers, from Iran and elsewhere, adding to the 1.2 million IDPs already located within Afghanistan. The Afghanistan Development Update provides a number of recommendations to manage the risks arising from the growing number of IDPs at a time of slowing growth, poor security and increasing unemployment.