When It Comes to the Hunger Challenge, Producing More Food Isn’t the Only Answer 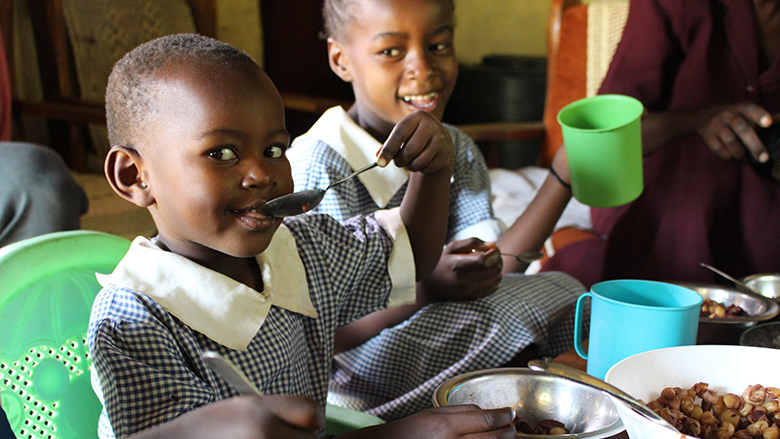 As the world prepares to mark World Food Day on October 16, we sat down with Juergen Voegele, Senior Director for the Agriculture Global Practice, to find out how the World Bank is fighting hunger.

There is an “international day” for virtually every issue. Why is “World Food Day,” which is the global community’s day of action against hunger, important?

Everybody eats. So people understand the fundamental role food plays in health and well-being.    The global community recognizes it too, which is why ending poverty and hunger and achieving food security are the top two Sustainable Development Goals. It is morally unacceptable that 800 million people go hungry every day.  And the challenges surrounding the global food system will intensify. Food demand is projected to increase by at least 20 percent over the next 15 years. Yield gains are now just 1-1.5 percent, barely ahead of population growth. We’re running as fast as we can, but we’re in danger of falling behind.

The international community has marked World Food Day since 1979. What’s changed since then?

There’s greater awareness that the challenge doesn’t end with producing more food for a growing population. With climate change and dwindling natural resources, sustainability of the food system is important.  That’s why the World Bank promotes climate-smart agriculture, which aims to secure a triple-win of increased productivity, greater resilience and a lower environmental footprint.

What’s the link between agriculture and climate change?

Agriculture is a victim of climate change but also a major part of the climate problem. Agriculture and land use change cause up to 25% of greenhouse gas emissions. If we don’t change how we produce our food, this could rise to 70% by 2050, making it impossible to meet COP 21’s goal of keeping temperature change well below 2 degrees.

Climate change could reduce crop yields by up to 20% if temperatures rise above 2 degrees.   The poorest regions, which are home to the largest numbers of poor and hungry people, will be most vulnerable. Agriculture can and must become part of the climate solution. We must get climate-smart agriculture right.

Over the past year, we’ve seen El Nino’s devastating impacts, especially in Southern Africa where up to 40 million people might not have enough food next year. The World Bank is helping countries respond, for example by helping Malawi improve food security in drought-affected communities and exploring ways to manage climate risks on a regional level.

One-third of all food that’s produced globally ends up in the garbage and in landfills. How does that factor into the equation?

Food waste is not only a moral and ethical issue, it is also an environmental issue. If food waste were a country, it would be the third largest emitter of greenhouse gases from decomposing food. There are movements advocating for consumers to change their behavior—for example to buy ‘ugly’ food. There are also improvements along the value chain, especially in the post-harvest stages, to reduce loss and extend shelf life. Improved storage, for example. In Bangladesh, the World Bank financed steel silos that can store grain up to three years.

Are climate-smart agriculture and reducing food waste the solutions to hunger?

Yes, but more is needed.  While there’s hunger, there’s also hidden hunger, or malnutrition, which is when food doesn’t meet people’s nutritional requirements.   156 million children under age five who haven’t received enough micronutrients are stunted.  They cannot grow to achieve their full potential so this is a serious development problem.   Also related to malnutrition is obesity, which is a growing epidemic worldwide.

Of the 2.1 billion people who are overweight or obese, 62% of them live in developing countries. The economic cost of obesity is US$ 2 trillion.  So besides being climate-smart, agriculture also needs to be nutrition sensitive.

How is the World Bank helping to end hunger?

The World Bank is working with countries to build a food system that can feed everyone, everywhere, every day with a safe and nutritious diet, delivered in a sustainable way. In Niger, we recently launched the first project in Africa that’s specifically designed to deliver climate-smart agriculture. The project will expand the use of drought-tolerant seeds and conservation agriculture techniques.  Its success will pave the way for a new generation of climate-smart agriculture projects in Africa, which is expected to bear the brunt of climate change.

We are also scaling up climate-smart agriculture in the rest of the world. 100% of the World Bank’s agriculture projects are being screened for climate risk and undertaking greenhouse gas accounting to make them more “climate-smart.”

Can we end hunger and build a food system that feeds all by 2030?

Yes we can!  If we’re serious about ending poverty and boosting prosperity, we need to build a sustainable and nutritious food system that can feed everyone. Agriculture growth it is two to four times more effective in raising incomes of the poorest people than growth in other sectors.

I often say that agriculture isn’t just about food and nutrition security, it’s also about peace and security. Food insecurity is one of the major drivers of conflict and refugee displacement—this is what’s happening in South Sudan, for example. A sustainable food system is central to any development equation and also a source of stability and opportunity for future generations.