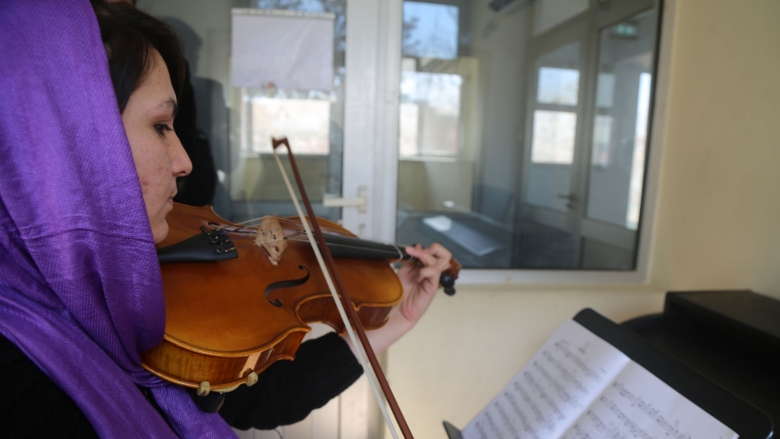 Studying at ANIM has changed the students worldview and giving them the prospect of a career.

KABUL CITY, Kabul Province – A large shoe rack holds scores of tiny student shoes, but this is no normal school. The Afghanistan National Institute of Music (ANIM), located on one of the busiest streets of the Kart-e-Char district, west of Kabul City, teaches more than 300 pupils a full curriculum, focusing on both Afghan and Western classical music, as well as core academic subjects such as science, English, and mathematics.

Farhad Safari, 14, a student at ANIM who plays the dilruba, a local classical instrument, says, “I have learned so many things in this institute that I could never learn in regular public schools. The teachers are very friendly and they always help us solve our academic problems.” Farhad is taught by Afghan traditional music teachers as part of ANIM’s aim to secure the continuity of traditional music and use of Afghan classical instruments.

Studying at ANIM has changed Farhad’s worldview and given him the prospect of a career. “Now music has become so deeply engrained in my life that I spend most of my spare time playing it,” he says. “Nobody knew me before I joined the institute, but now I am known for revitalizing our traditional and classic music in the country. I have made friends with a lot of famous musicians and singers.”

ANIM, inaugurated in 2010, inherited its premises from the former Academy of Fine Arts, but the Academy “was existing as a school only in name,” according to ANIM’s founder and director, Dr. Ahmad Naser Sarmast.

The World Bank, together with other donors, has been providing support to ANIM since its establishment. ANIM, which operates under the Ministry of Education, received support under the Afghanistan Skills Development Project (ASDP) that aimed to build a high quality Technical and Vocational Education and Training (TVET) system. ASDP, which was financed by the World Bank and Afghanistan Reconstruction Trust Fund (ARTF), closed on June 30, 2014.

However, the World Bank is continuing to support Afghanistan’s TVET system through a follow-on project, the Afghanistan Second Skills Development Project (ASDP II). ANIM continues to receive support through this project, which focuses on providing incentives to schools and institutes offering formal TVET programs through a challenge fund scheme, while simultaneously strengthening the TVET institutional system as a whole in the country. 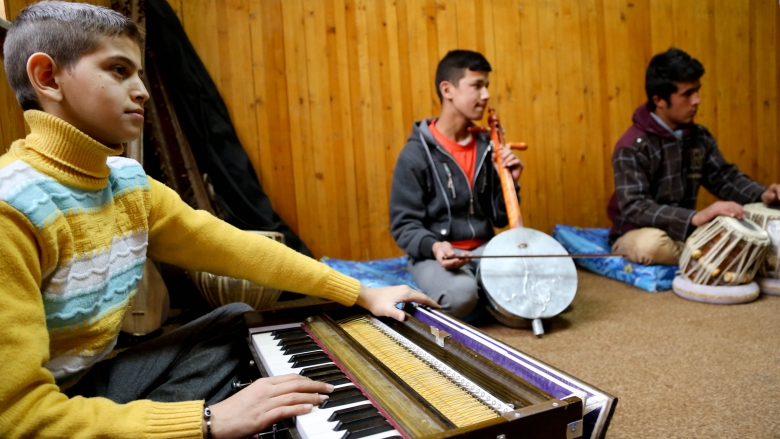 Children are transforming their lives through music at the Afghanistan National Institute of Music, where half the students come from impoverished backgrounds.

Rumi Consultancy / World Bank
" Thanks to ANIM’s students and their performances on the prestigious stages of the world, the international community had an opportunity to see a different face of Afghanistan, a place of hope and diversity.  " 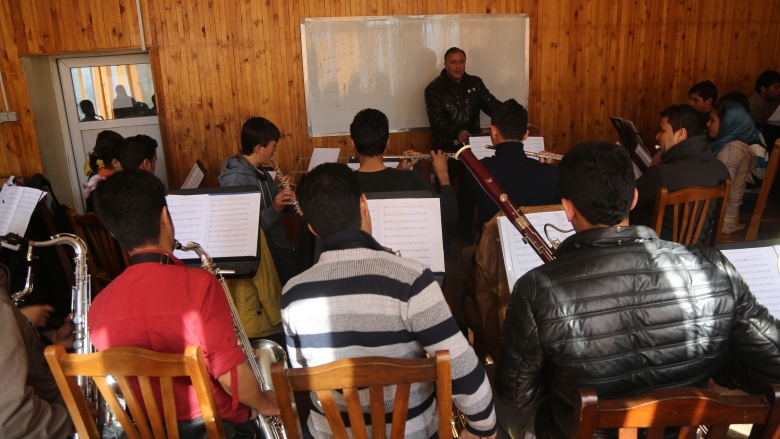 To ensure continuity of the program the institute hires a number of foreign musicians to teach at the school. These educators are then matched with Afghan music faculty in an intensive mentoring program, in which Afghan and foreign staff work together for two years, before Afghan staff take full responsibility for the teaching.

To this end, ANIM’s model incorporates several sustainability measures. Since inauguration, the institute has hired a number of foreign musicians to teach at the school. These educators are then matched with Afghan music faculty in an intensive mentoring program, in which Afghan and foreign staff work together for two years, before Afghan staff take full responsibility for the teaching.

According to ANIM’s current plan, all positions—teaching and administrative—will be filled by Afghan graduates of the institute before 2018. Already, two former students have been hired as assistant teachers at the institute. Building local capacity will help bring down investment costs in training and enable the institute to reduce its running costs and become sustainable as a national institute without donor contributions in the near future.

Nonetheless, the institute’s operating expenses are ensured of government support as ANIM functions under the Ministry of Education, rather than as a private educational institution. At the same time, as ANIM garners recognition as a center for musical excellence, students are invited to give concerts in Afghanistan as well as other countries, which help generate income.

In addition to these revenue-generating activities, ANIM maintains a number of partnerships to promote equal access to education, including nongovernmental organization Save the Children, Aschiana (a foundation that provides education to working street children), Afghan School for the Visually Impaired, orphanages, and many other organizations and institutions.

Half the students come from disadvantaged backgrounds. “I have students who were selling plastic bags on the streets of Kabul, but are now promising concert pianists,” Dr. Sarmast says. “I have a student who sold boiled eggs on the street to make a living, but he’s a wonderful flute player now. I strongly believe music can transform lives beyond recognition.”

Associate Professor Mohammad Rahil Formuly, Deputy Minister for the Ministry of Education, is pleased with the institute’s achievements. “ANIM’s state-of-art facilities, expertise and innovative educational and music programs make it a center of excellence in the region, acknowledged by the 2015 UNESCO Wenhui Award for Educational Innovations,” he says. “The institute has been carrying the torch of people-to-people and intercultural dialogue between Afghanistan and the international community through its many programs and concert tours. Thanks to ANIM students and their performances on the world’s stages, the international community has seen a different face of Afghanistan—a place of hope and diversity”.