Mirebalais: A Bridge Towards Health 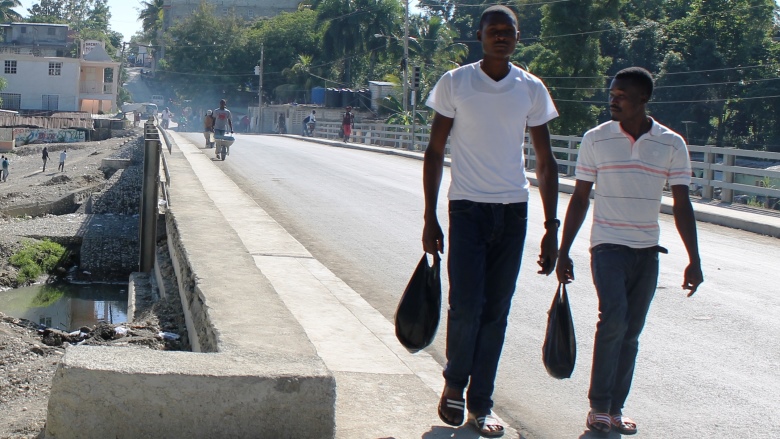 The collapse of the bridge of the river La Theme during hurricane Hanna in 2008 had cut the city of Mirebalais in the department of central Haiti in half. For nearly two years, students, patients, merchants, and travelers were sentenced to use makeshift boats called “excavated wood " or try to pass on a donkey to get from one side to the other.

It’s an ordinary morning in Mirebalais: cars, pedestrians, trucks, motorcycle taxis run on a great new bridge over the river La Theme while further down a group of busy women do their laundry. This bridge connects residents and travelers to essential services: on one side is the university hospital of Mirebalais which currently serves over 1,000 people a day and on the other lies the city center where most of commercial activities and schools are.

Francky Louis lived on the hospital side - at the time a community hospital - and remembers the time period after the collapse of the bridge. His daughter had to cross the river every day to get to school downtown. Francky moved and built his house on the other side in order to avoid these trips. "Sometimes canoes overturned in the river because they were overloaded," says Louis Francky.

Despite the construction of a ford, nearly two years after the collapse of the bridge, the crossing could be complicated. "Sometimes I would wait two hours after the rain for the water level to drop so as to try to cross. Motorcycles, cars would try to cross the river, "continues Louis.

A bridge to Health

Judeline is returning from the hospital over the bridge with her daughter. She is glad she is able to cross over the river without having to use a motorcycle taxi which used to violently shake her and her daughter on the ford. "Now I can go walk with my child, the cars go from one side and us on the other," she says, smiling. Transportation was particularly difficult for children, the sick and pregnant women.

Dr. Pierre-Marie Cherenfant, chief medical officer at the University Hospital of Mirebalais, was director of the former community hospital. He confirms: "Access to health care was virtually cut off before the new bridge... It was a very difficult time. For night emergencies, we had decided to post an ambulance on the other side of the river, in order to transport the sick to Lascahobas (a small neighboring town). From our side there were not many people, it was a new area ... The hospital was separated from the rest of the city and the department of the Centre also because they covered 150,000 inhabitants. "

The University Hospital of Mirebalais took over the community hospital in 2013. It serves the entire department and nearly 3 million people: patients come from all over the country and the number of visits has increased exponentially, according to Dr. Cherenfant. The bridge has become a vital artery for this community, facilitating access to the hospital to thousands of patients.

"Back to Business": the bridge, a strategic crossing point

For months, the disappearance of the bridge also affected the connectivity between three departments: Artibonite, North West and especially for trucks with high tonnage and tourists. For Doctor Cherenfant, "The bridge is fundamental at a strategic level, the far north goes through Mirebalais especially when there are problems on the road n1."

Moreover, it connects tourists to institutions located on the bank of the hospital and allows the organization of entertainment activities. “90%  of “Auberge international” clients are international travelers and come from Port-au-Prince.

"Before the ( new ) bridge there was no business," says Pierre Martin, the owner of the inn. "It was an isolated area. Even if we wanted to travel to Mirebalais, we did not cross to avoid being stuck on the other side of the bridge. "