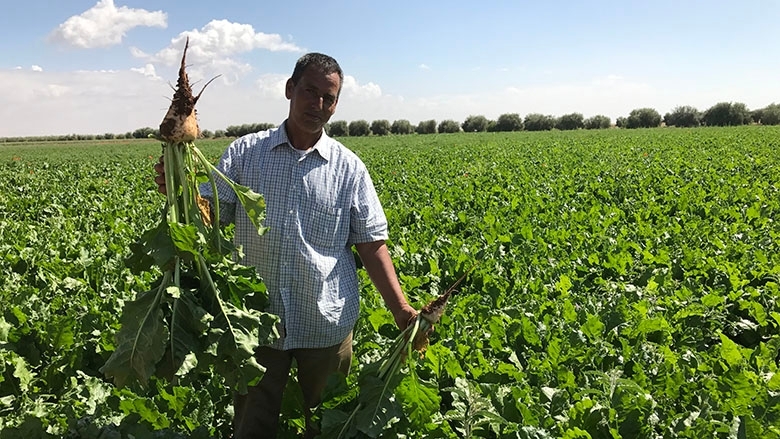 In water-scarce Morocco, irrigation plays a fundamental economic and social role, contributing to agricultural productivity and rural population’s income. While irrigation is practiced on only 16% of the cultivated land in the kingdom, it generates half of the agricultural Gross Domestic Product (GDP) and 75% of agricultural exports. However, water scarcity, accentuated by climate change, represents a growing challenge for farmers.

To promote a more sustainable irrigation model, the government of Morocco has developed a national plan to optimize water use and increase productivity in irrigated agriculture (Plan National d’Economie d’Eau d’Irrigation, PNEEI), which has been supported by the World Bank since 2010.

Oum Er Rbia, the country’s second largest river originating from the Millennium Atlas Mountains, supplies water to half of Morocco’s large scale irrigated areas. It passes through the Doukkala region in west central Morocco, a region known for its fertile plains. Water is diverted from the river and distributed through canals and pipes, that the PNEEI intends to modernize to provide better water services to farmers. Upgraded water distribution networks are able to deliver water 24/7 (rather than every couple of weeks) and individually (rather than collectively). The improved water service allows farmers to adopt more efficient irrigation technologies, mainly drip irrigation, which is sponsored by the government of Morocco through an incentive program. An effort welcomed by farmers, who have a keen interest in more reliable access to water, which is key to achieving greater productivity, and thus increased income.

Ahmed El Youssfi, 52, owns 14 hectares of land near the village of Thnine Gharbia, in Doukkala. His land benefitted from the World Bank-supported project to help modernize the irrigation network in his area. “We used to rely on groundwater to irrigate our lands; access to water was a luxury and we could spend months during the summer without farming our land and without any income”, said Ahmed. “Drip irrigation has changed the way local farmers manage their lands. Not only does it save us 25% of irrigation water but it also tremendously increases our productivity. Over the years, my income is 25 to 30% higher than the times when I relied on sprinkler irrigation” added Ahmed.

But producing more is not the end game of this effort. Farmers need greater access to markets and agribusiness clusters to see an increase in their income. This is supported by Morocco’s Green Plan (Plan Maroc Vert, PMV), a strategy designed to boost both the agricultural sector’s productivity and its exports.

In the World Bank-supported project, Kamel Belabbes is part of the technical assistance team responsible for facilitating synergies between the processing sector and farmers in Doukkala. “Our role here is to build bridges between the processing sector and farmers’ associations,” he explained. His efforts and the farmers’ engagement have already paid off. The region is supplying the country’s national sugar company with sugar beet production; the industrial tomato production is also making good headway along with milk production. “We are currently exploring other crops that can supply the processing industry with locally-grown produce, namely soya for the oil industry. This will not only ensure greater income for farmers but will also increase their crops’ added value to meet growing agribusiness demand” added Kamel.

Making every drop count of Morocco’s precious water resources is at the center of the country’s effort to boost its agricultural and agribusiness industry. It is about farmers’ livelihoods, rural jobs, efficient use of water and increased agricultural productivity. And with a more sustainable water system management, Morocco can rise to the challenge of becoming a leader in agricultural production and boosting its exports to regional markets.