BAMYAN CITY, Bamyan Province – Farmer Rajab is walking through his farm and surveying the crops he will harvest in a few days. He has cultivated potatoes, onions, wheat, and a variety of vegetables on his 60-hectare farm this year.

Rajab, who lives in the central district of Bamyan city, is optimistic about having a good harvest this year. A newly reconstructed canal, the Mullah Ghulam canal, in the village is providing efficient and effective irrigation to his crops. Until recently, Rajab’s farm was irrigated by water from a spring close by.

“Before the canal was rebuilt, most of our irrigation water was lost in the old canal and we were ultimately left with an insufficient amount of water for irrigation,” he recalls. “But now more water reaches our farms, which has increased the amount and quality of our crops.”

Mullah Ghulam canal, which was reconstructed to standard specifications between 2011 and 2013, irrigates 60 hectares of farmland. A total of 800 meters of the 3,215-meter long canal is paved with concrete. The project cost of some 1.4 million Afghanis ($21,500) was financed under the On-Farm Water Management Project (OFWMP), under the Ministry of Agriculture, Irrigation and Livestock (MAIL).

OFWMP has completed 13 projects in Bamyan Province including five in Bamyan city, five in Saighan district, and three in Yakawolang district. One of these projects involved building the Mullah Ghulam, Ligi, and Regsha canals in Surkhdar village.

With a $25 million grant from the Afghanistan Reconstruction Trust Fund (ARTF), OFWMP aims to support on-farm water management investments in five regions—Kabul, Baghlan, Herat, Nangarhar, and Mazar—covering a total of 19,000 hectares. OFWMP works to improve agricultural productivity in project areas by enhancing the efficiency of water use. 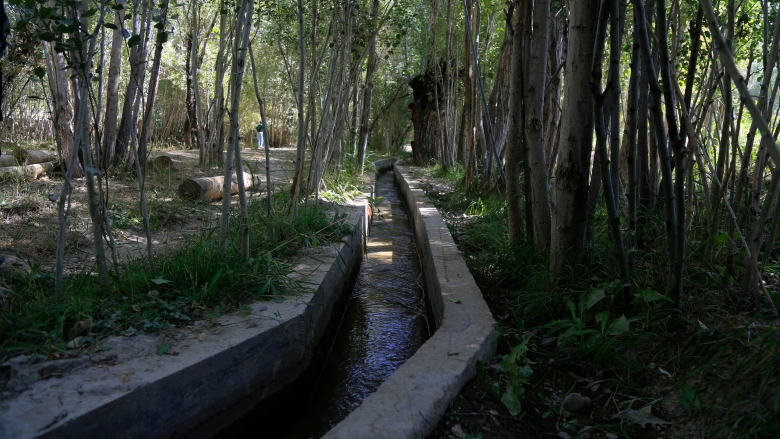 The rebuilt canal has made water management easier for farmers, the majority of residents in Surkhdar village, who mainly grow crops such as potatoes, wheat, and vegetables.

Rumi Consultancy / World Bank
" Now farmers do not face any water shortage throughout the year. They are able to harvest more crops of higher quality.  "

According to Lala, project engineer of water canal construction in Bamyan Province, the standardized canals in Surkhdar village have brought many positive changes in the lives of residents. “Most farmers are now busy farming because of the increase in the amount of irrigation water. They can cultivate more land than they used to,” he says. “Also, there has been a significant increase in the amount and quality of their crops. With less water loss, they can better manage their water, which can easily and quickly reach their farms.”

The rebuilt canal has made water management easier for farmers, the majority of residents in Surkhdar village, who mainly grow crops such as potatoes, wheat, and vegetables. They no longer face conflicts over water or challenges as water reaches their farms in scheduled turns. Farmer Hussain says: “Previously, it used to take three hours to irrigate my farm and the water loss was persistent. But now irrigating it all takes only 20 minutes and water loss is minimal.”

Abdul a farmer, agrees that farmers are seeing higher crop yields and quality as a result of improved water management. “In the past, there was enough water and only a few problems in April and May, but we faced water shortage in July and August when our crops needed more water. Now farmers do not face any water shortage throughout the year. They are able to harvest more crops of higher quality,” he says. “In the past I harvested around 15,400 kg of potatoes, but ever since the canal was built, I have harvested around 35,000 kg of potatoes.”

Lands located at the very end of the canal could not get enough water previously and were left uncultivated. The farmers are pleased that all the arable land in Surkhdar village are now cultivated, and that life has changed for the better.