Nearly 50,000 African elephants were slaughtered for ivory in 2011. That means, that just in one day, more than 100 elephants die at the hands of poachers.

That number will not go down without a concerted, international effort to develop a network of resources that includes information such as names of poachers, possible trading routes and activities, according to a new World Bank paper.

Such a network could provide an effective response in the short term and help individual African countries and the region as a whole develop their own law enforcement capabilities over time to systematically fight elephant poaching, according to the paper entitled “Elephant Crime Intelligence System Assessment.”

To make that happen, reliable, timely, and accessible criminal intelligence is fundamental, but a comprehensive tool that brings together all this information and is updated constantly is the need of the hour, said William Magrath, Lead Natural Resources Economist at the World Bank Group.

So what fosters elephant poaching and ivory trafficking and how can the global community prevent this?

" You get a newspaper article, you get an NGO publication, sometimes people mention names, and sometimes they don’t. And sometimes people get arrested in developing countries or get held up at the airport… Analyzing all this information should be done at the global level. "

Weak governance and poverty, inadequate natural resource management and increasingly sophisticated crime networks are some of the primary reasons for active ivory trafficking, the report states.

Poaching rings are run like sophisticated, established businesses, making it tough for many national law enforcement agencies to catch or prevent poaching in time.

Elephant ivory, in addition to rhino horns and tiger products, is among the most sought-after poached items in the world. According to the World Wildlife Fund, poaching is the fifth most profitable illicit trade in the world, estimated at up to $10 billion annually.

But protecting the African elephant has much wider implications than preserving the species. For example, it promotes biodiversity and conducive habitats for several other species, and aids tree species with seed dispersal and germination.  It also helps maintain a robust tourism industry, which is vital to rural communities that derive thousands of jobs and livelihoods by working in tourism or other supporting industries such as food and transport that are more sustainable and have greater growth potential.

There is a growing arsenal of partnerships and treaties to tackle wildlife crime: The multilateral treaty known as the Convention on International Trade in Endangered Species of Wild Fauna and Flora (CITES), which entered in force in 1975, has 181 signatories and aims to ensure that international trade in specimens of wild animals and plants does not threaten the survival of species. CITES parties banned trade in ivory in 1990.  The World Bank is also a member of the International Consortium on Combating Wildlife Crime (ICCWC), a collaborative effort led by CITES to bring coordinated support to national wildlife law enforcement agencies and networks that act in defense of natural resources, taking into consideration the need to provide livelihood support to poor and marginalized rural communities, and will work with partners to ensure a successful implementation of a new $90 million Global Partnership on Wildlife Conservation and Crime Prevention for Sustainable Development.

The report however hones in on a current gap in the fight against elephant poaching. It suggests that achieving success requires a professional criminal intelligence capacity that leverages knowledge and the latest technology available in law enforcement tactics such as forensics and that INTERPOL is the agency best suited to guide the effort.

INTERPOL, which has 190 member countries, is already working along these lines with initiatives like Project Wisdom, which aims to strengthen law enforcement capacity to protect elephants and rhinoceros in Africa, said Deon Burger, a representative of INTERPOL’s Environmental Security Sub-Directorate.

“The elephant crime report essentially reflects how we think we can tackle the problem. Now, we have to move forward and ask ourselves – how do we get there?” Burger said.

The key aim of the intelligence-led approach would be: 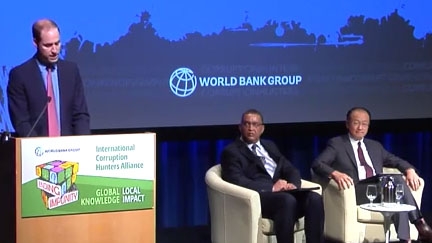