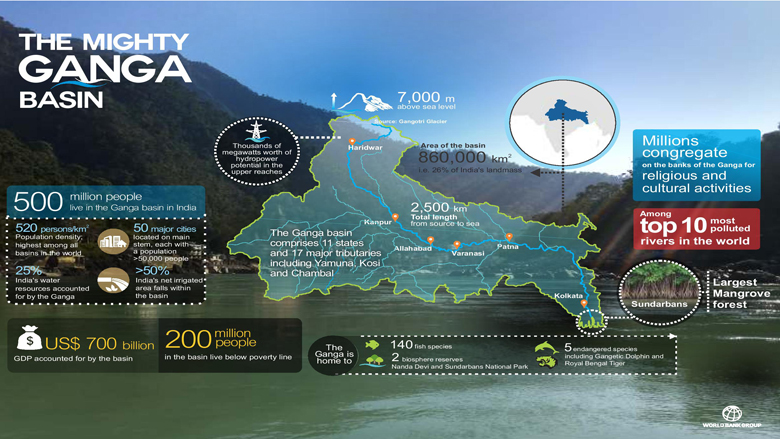 The Ganga is India's most important and iconic river. It flows down from its glacial source in the high Himalayas to course through five states in the northern plains before draining into the swirling waters of the Bay of Bengal through the Sunderbans delta, the largest mangrove system in the world. Along its 2,500 km journey, the river enriches huge swathes of agricultural land and sustains a long procession of towns and cities.

The sprawling Ganga basin, an area of 860,000 sq km spread across 11 states, is the world’s most populous river basin. It is home to more than 600 million Indians, close to half the country’s population; and over 40 percent of the country’s GDP is generated in this region. The basin provides more than one-third of India’s surface water, 90 percent of which is used for irrigation.  Paradoxically, this fertile region is also home to some of the poorest sections of India’s population, with more than 200 million people living below the national poverty line.

As India's holiest river, the Ganga has a cultural and spiritual significance that far transcends the basin’s boundaries. It is worshipped as a living goddess and, since time immemorial, people from across the country have flocked to the many historic temple towns the lie along the river’s banks to pray and bathe in its flowing waters.

Pollution in the Ganga

Despite this iconic status and religious heritage, the Ganga today is facing formidable pollution pressures, along with the attendant threats to its biodiversity and environmental sustainability. An ever-growing population, together with inadequately planned urbanization and industrialization, has affected the quality of the river’s waters.  Today, the Ganga’s waters are sullied by the incessant outpouring of sewage, as well as by the large volumes of solid and industrial waste that are churned out by human and economic activity along the river’s banks.

The absence of adequate infrastructure, along with weak environmental governance and little technical expertise to manage these extreme pollution pressures, has resulted in the rapid deterioration of the water’s quality in recent decades.

The Ganga’s mainstem runs through 50 major Indian cities, almost all of which have a population of more than 50,000 people. These towns and cities generate some 3 billion litres of sewage every day, only a fraction of which is treated before it reaches the river.  While domestic sewage accounts for 70-80 percent of the wastewater that flows into the Ganga, Industrial effluents add another 15 percent, with far-reaching impacts on human and aquatic health due to their toxic nature. And, in the absence of adequate solid waste management in most cities, mounds of uncollected garbage add to the pervasive pollution.

The National Mission for Clean Ganga (NMCG), the operational wing of the NGRBA, has been set up to coordinate the river’s clean-up program. State Program Management Groups (SPMGs) have been established in all five mainstem states. Investments are being implemented by multiple executing agencies, mainly parastatal organizations such as the Uttar Pradesh Jal Nigam, Bihar Urban Infrastructure Development Corporation, Kolkata Metropolitan Development Authority and some Urban Local Bodies (ULBs)

The project aims to plug some of the major infrastructure gaps in cities along the Ganga’s mainstem. Several key investments have been identified primarily to address the problem of untreated domestic sewage from towns and cities along the river. Work has already begun on wastewater investments in the cities of Rishikesh, Haridwar, Kanpur, Allahabad, Patna, and Kolkata, as well as in smaller towns that lie along the river’s critically polluted stretch in Uttar Pradesh.  This will result in the installation of over 300 MLD of new sewage treatment capacity and over 2,000 km of new sewerage networks in these urban centres.

Building on lessons learnt from earlier efforts to clean the Ganga, these investments have been designed to ensure their long-term sustainability.  The new wastewater investments will be developed in the PPP mode but innovative 10-year Design–Build–Operate (DBO) contracts will ensure that the private operator maintains the infrastructure for 10 years.  This period will be utilized for strengthening the technical and financial capacity of the ULB service providers to manage the long-term operation of these assets. In a bid to ensure that the new assets do not remain unutilized, all houses/properties will be connected to the sewerage networks; these networks will, in turn, be connected to new or existing treatment systems.

Uttarakhand:  The first investments in this state are likely to be wastewater treatment and conveyance systems in the Hardiwar-Rishikesh area with some 100 kms of sewer networks and 80 MLD of sewage treatment capacity being built in Jagjitpur and Muni ki Reti.

Uttar Pradesh: Investments worth more than $250 million are focusing on reducing the pollution load in the river in key cities and towns that lie along the river’s most critically polluted stretch. In Allahabad alone, the project will help build two sewage treatment plants as well as 800 km of sewerage networks in four city districts, covering almost 80 percent of the city’s population of nearly 1.3 million people.

Bihar: Patna just has about 20 km of sewers for some 3 million people.  Project investments worth more than $230 million will help cover the city fully with wastewater treatment and sewerage systems. In addition, an ongoing $43 million investment in river-front development will not only build a new a 6-km promenade along the river but also help upgrade public infrastructure such as toilets, bathing areas and other public amenities at 21 ghats.

West Bengal: Investments worth 46 USD million are underway in Halisahar and investments are being prepared to manage wastewater in the towns of Budge Budge and Barrackpore that fall within the Greater Kolkata Metropolitan Area.   In Kolkata city, the project is financing preparatory studies for the clean-up and rehabilitation of Tolly’s Nullah, a severely polluted urban canal that runs through the core of south Kolkata. It will also help city authorities plan and develop an integrated river-front development for Kolkata and Howrah.

Water Quality Monitoring: Some 30 state-of-the-art, real-time water quality monitoring stations will be installed along the river in the first phase of a larger effort to acquire reliable water quality data. These will be managed by the Central Pollution Control Board and will strengthen the regulation and oversight of the river’s pollution load by helping planners better understand the point-source versus non-point source origins of pollution, as well as to assess the impact of treatment on the water’s quality.

Ganga Knowledge Center: An internationally-recognized research institute concerning all aspects of the river, known as the Ganga Knowledge Center, has been established; the institute is in the early stages of operationalization.  The institute’s mandate includes conducting modelling and targeted research to facilitate basin-scale decision-making, mapping the entire basin through a GIS-based mapping system, as well as disseminating knowledge, including through a high-quality web portal.