KHARTOUM, April 30, 2014—While Sudan’s peace building challenges continue to engage international experts, progress on the state building front is often shrouded by news of conflict. The nation continues to weather the trauma of secession which caused it to lose 75% of its oil production accounting for nearly 60% of its revenues.

Despite the challenges, several important initiatives supported by the Multi-donor Trust Fund for Sudan (MDTF-N), are showing positive results, bringing relief to the poor and improving governance.

“The benefits flowing from the 15 projects implemented by the MDTF-N between 2006 and 2013 across many sectors of the economy are examples of what can be done through a strong partnership and carefully managed development assistance,” says Xavier Furtado, Country Representative for the World Bank in Sudan. “By helping to build government capacity at both national and local levels and initiating policy reforms targeted at those most in need, the Fund has provided a strong foundation for change that, in some cases, is now being sustained through ongoing government programs.”

" The benefits flowing from the 15 projects implemented by the MDTF-N between 2006 and 2013 across many sectors of the economy are examples of what can be done through a strong partnership and carefully managed development assistance. "

Improving life for farmers and fishermen

The MDTF-N, a $585 million fund from the government of Sudan and 10 international donors, worked in several sectors to reduce poverty and build institutional capacity to provide Sudan’s 37 million citizens with better services.

The Fund supported the completion of the fifth national population census which provided important data for policy making, strengthening of public financial management, training of thousands of government officials and rural development programs that are helping to diversify the economy.

Community–based infrastructure, services and employment initiatives are building skills and assets at the local level, benefitting 780,000 people—more than double the initial target.

The MDTF-N livestock project, for instance, improved the lives of more than 137,325 people by creating six new markets, investing in veterinary care and demarcating pastoral routes for herders to avoid land use conflicts.

“Now we have a large, strong herd of sheep,” says Chief Hamdan Bakheit, from North Kordofan state. “We can sell a sheep and we have school fees for a year or buy medicines when my son is sick, which is less frequent now since everyone in the family drinks milk.”

The Fund also helped revitalize the gum Arabic sector, a major source of employment for thousands of Sudanese. Gum Arabic is prized by the global pharmaceutical and food industry for its uses in medicines and food products.

“Prices doubled from 100 SDG for a hundred pounds of gum Arabic in the first year and now, after four years, we are getting 500 SDG,” says a satisfied Mohammed Adam Safi Adeen from Hilat Ismail village in North Kordofan state.

Over 11,346 producers are benefitting from this project and exports increased by 120% in 2012 earning revenues of US$82 million.

An MDTF-N-supported microfinance project, which included fisheries and other productive sectors, helped increase earnings for 380,000 households, including that of Jadala Zain, a fisherman from Kassala state, who says his catch increased threefold after he received a loan.

Years of conflict have taken a heavy toll on the quality of life in Sudan and the country has been unable to invest adequately in its people. The World Bank estimates that primary school enrollment was 46% in 2001 and that the overall literacy rate for adults aged 15 years and older was 60%.

Education was therefore an important task for the MDTF-N which rebuilt or constructed 567 schools and trained 11,000 teachers in four of the poorest states, helping one million children enroll in schools.

Communities have also made gains that can’t simply be measured by the numbers.

“Our communities are against girl’s education but we have managed to have our daughter’s enrolled...we need them to grow up and help with the development of the community,” says Madani Ohaj Madani, a resident of Talkook Locality in Kassala state.

As part of the Fund, a new Education Sector Strategy leveraged US$76.5 million in additional donor funding to send children to schools across 10 states.

As with education, the health status of many Sudanese citizens remains low with an average life expectancy of 57 years. Maternal deaths were high at 750 per 100,000 births in 2010 and malnutrition is widespread.

The MDTF-N targeted four of the most vulnerable states in the country for the construction of 127 health facilities, the training of 2,700 health professionals and provision of medical supplies. Between2009-12, these efforts helped double the number of outpatient treatments and raise the number of births attended by a skilled professional from 19% to 51%.

“We used to think that maternal deaths were part of Allah’s will,” says Adam Talab, Chief of Hamashkoreb village in Kassala state. “While we can’t reject God’s will, now we know a lot of the time these deaths are caused by our negligence.”

The Multi Donor Trust Fund for Sudan closed in December 2013 and on April 10, 2014 the Executive Board of the World Bank approved the Sudan Multi-Partner Fund.

“We must build on these achievements for the benefits of Sudan’s poor,” says Furtado. “The recently-approved Sudan Multi-Partner Fund is an effort to do exactly this and we look forward to working closely with the Government and donor partners in this important new endeavor.” 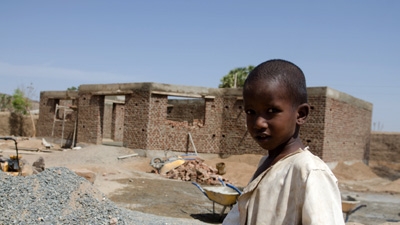 Sudan, A Partnership for Shared Prosperity

Sudan's Midwives: Saving Lives One Mother at a Time