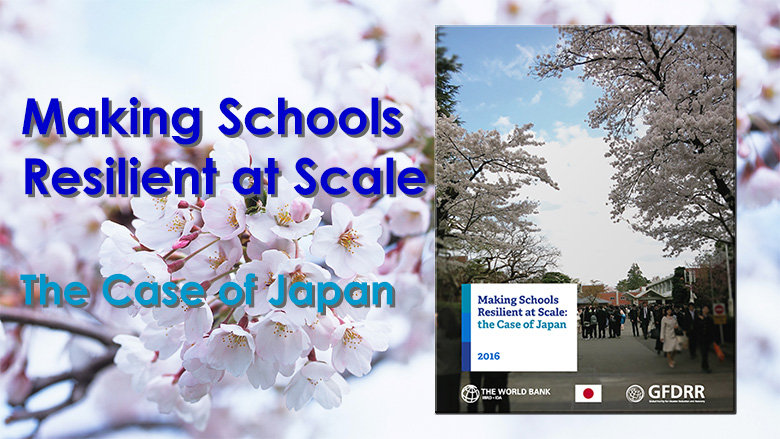 Natural disasters often damage or destroy school infrastructure, threatening educational opportunities and risking the lives of schoolchildren. The May 2008 Sichuan Earthquake (China) caused the collapse of 6,898 school buildings and the deaths of 19,065 schoolchildren. To address this challenge, the Global Facility for Disaster Reduction and Recovery (GFDRR)’s Global Program for Safer Schools (GPSS) aims to make school facilities and the communities they serve more resilient to natural hazards. The program works to reduce the physical impact of disasters on school infrastructure and minimize the negative educational outcomes that result from disasters.

GPSS, in partnership with Disaster Risk Management Hub, Tokyo, has conducted a case study of Japan where significant achievement was made to improve the seismic resilience of public school buildings. As of April 2016, nearly 100 percent of public school buildings are seismic-resilient, while under half of schools were so in 2002. This public seminar will launch the case study that summarize Japan’s comprehensive approach includes innovative financial scheme, political and technical solutions, as well as lessons learned that are relevant to countries trying to address similar challenges.

The World Bank Disaster Risk Management Hub in Tokyo implements the Knowledge Program to share, with the rest of the world, Japan’s knowledge and expertise on disaster management. In the context of the Knowledge Program, a seminar was held on November 2, 2016 to launch a report on the experience of Japan in making school facilities and the communities they serve more resilient to natural hazards. The report "Making Schools Resilient at Scale: the Case of Japan" is a compilation of efforts to make school facilities resilient to natural hazards, particularly the experience of building earthquake-resistant public school facilities, as well as lessons learned that are relevant to countries trying to address similar challenges. The full report can be downloaded here.

The seminar was opened by the Special Representative, Japan, World Bank Group. The first presentation was given by the World Bank’s Disaster Risk Management Specialist regarding the challenges developing countries face in building resilient school facilities, lessons to learn from Japan’s experience and efforts by the World Bank to support this important initiative. Next, the Deputy Director of the Office for Disaster Prevention from the Ministry of Education, Culture, Sports, Science and Technology (MEXT) of Japan introduced Japan's major initiatives to make schools earthquake-resistant. Finally, the Deputy Undersecretary of the Ministry of National Education from Turkey shared the national-level initiatives on making schools earthquake-resistant.

During his opening remarks, Yasusuke Tsukagoshi, Special Representative, Japan, World Bank Group stressed how natural disasters not only interrupt education but cause an extremely costly reconstruction process of the school infrastructure system. According to World Bank estimates, retrofitting schools against the risk of earthquakes contributes to a reduction of the average restoration cost in the event of a major disaster to 1/45, while the estimated maximum loss is reduced to 1/6.

Vica Rosario Bogaerts, Disaster Risk Management Specialist in the Social, Urban, Rural and Resilience Global Practice at the World Bank provided an overview and overall objectives of the Global Program for Safer Schools (GPSS). Ms. Bogaerts shared the example of how the Japan-World Bank Program for Mainstreaming DRM in Developing Countries has supported the strengthening of the structural safety of schools in Peru, and highlighted the importance of optimizing investments taking into account the limited human and financial resources in developing countries. Ms. Bogaerts emphasized the need to draft policies based on the particular circumstances of a country, as well as pursuing a gradual approach to structural rehabilitation. In order to respond to these challenges, Guidance and Knowledge Notes have been developed by the Global Facility for Disaster Reduction and Recovery (GFDRR) and the World Bank to promote a long-term systematic approach to improving the safety of school infrastructure at risk from natural hazards.

From the Knowledge Notes, Ms. Bogaerts presented the Japan’s experience of turning public schools earthquake-resistant, in which financial and technical support from the national government to local governments was instrumental for the implementation and quality assurance of the risk-informed construction and retrofitting of school infrastructure. Finally, Ms. Bogaerts highlighted three key points from the Japanese experience that are particularly relevant to the World Bank’s work in client countries:

1)      Identification and prioritization of schools to optimize investments;

2)      Financial and technical support from the National Government to the Local Government during implementation of retrofitting activities (subsidy schemes and providing detailed guidelines);

Learning from the Japanese experience

Tetsuji Kimura, Deputy Director of the Office for Disaster Prevention, Department of Facilities Planning and Administration from MEXT described how in Japan the percentage of seismic-resilient public schools increased from over 40% in 2002 to almost 100% by spring of 2016, along with efforts to provide local municipalities with incentives to make school buildings earthquake-resistant while minimizing costs. Furthermore, he explained how the constant review of measures reflecting on the damages from past disasters such as the Great Hanshin Earthquake and Great East Japan Earthquake has developed into a systematic retrofitting of schools against earthquakes as well as the implementation of non-structural measures such as utilizing school facilities as evacuation shelters.

In the past decade, Turkey has worked quite successfully to increase its earthquake-resilient infrastructure, particularly schools and government buildings. Mustafa Çolakoglu, Deputy Undersecretary of the Ministry of National Education in Turkey detailed a plan to implement a nationwide project which will build earthquake-resistant schools to secure children’s safety and educational opportunities. The proposed project will be based on efforts that have been ongoing mainly in large cities. Very importantly, Mr. Çolakoglu noted that priority would be given to schools that also functioned as a place of residence, such as boarding schools. Furthermore, as an example of efforts made within limited resources, Mr. Çolakoglu shared how Turkey has leveraged investments from international financial institutions by partnering with private sector initiatives, private funds, and use of profits from land sales by moving from urban areas to the suburbs.

The project director from the Istanbul Seismic Risk Mitigation and Emergency Preparedness Project (ISMEP) participated via videoconference and presented on the many advantages of accumulated technological knowledge and project management systems in bringing municipal-level efforts to the national-level, as well as how the government’s continued commitment is serving as a mobilizing force.

The seminar was very well attended, including officials from the public and private sectors, academic and research institutions, and NGO officials, all of whom engaged in a rich discussion on Japan’s experience of making public schools earthquake-resistant and the lessons developing countries can learn from it. These discussions will be reflected in future activities of the Knowledge Program. 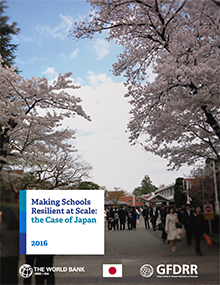 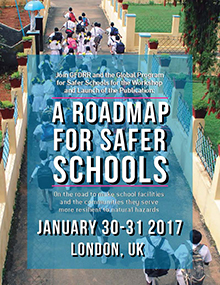