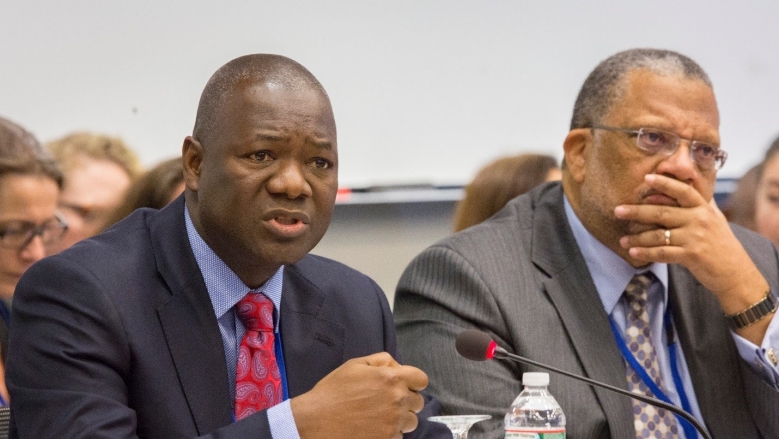 The fourth meeting of the Community of Practice (CoP) for Finance Ministers on Gender Equality was held at the 2016 Spring Meetings of the World Bank Group (WBG) and International Monetary Fund in Washington, DC. This half-day technical event opened with a brief session featuring finance ministers and other high-level speakers. The rest of the session was targeted at finance ministry officials at the level of Permanent Secretary and Budget Director to discuss policy options that have proven effective in closing economic opportunity gaps between men and women. The focus was on practical solutions, such as what steps to take to effectively increase women’s agricultural productivity, control of assets, access to good jobs, and entrepreneurship rates. The session drew heavily on evidence-based solutions that have been tested in the real world and which finance ministers can scale. During discussions, participants helped to identify and present successful interventions that finance ministries have had a hand in, which could be replicated across countries.

This meeting (i) provided specific, actionable and evidence-based policy advice to finance ministries on what works to close gender gaps, what does not, and why--drawing on the work of the WBG Gender Innovation Labs; (ii) generated a candid discussion among finance ministry managers on initiatives that work, hoping to generate South-South replication of good practices; and (iii) sought to spur specific actions by finance ministries that generate real country level results.

The event was organized in conjunction with the WBG’s Gender Innovation Labs in their role as the CoP technical advisory team.

COMMUNITY OF PRACTICE FOR FINANCE MINISTERS ON GENDER EQUALITY:
TECHNICAL-LEVEL SESSION ON HOW TO GET RESULTS

Breakfast is available to participants starting at 8:30 A.M.

Lunch will be served to participants at 12:30 P.M.

COMMUNITY OF PRACTICE FOR FINANCE MINISTERS ON GENDER EQUALITY:
TECHNICAL-LEVEL SESSION ON HOW TO GET RESULTS
APRIL 14, 2016

The fourth meeting of the Community of Practice (CoP) for Finance Ministers on Gender Equality was convened at the World Bank Group (WBG) on Thursday, April 14, 2016, at the time of the WBG and International Monetary Fund (IMF) Spring Meetings in Washington, DC.

Members engaged in a dynamic discussion of how to leverage finance ministry tools, most notably the budget, to achieve real-world results. This dialogue was grounded in evidence presented by the WBG Gender Innovation Labs, and in individual countries’ experiences.

- The gathered ministers’ opening remarks focused on their individual countries’ experiences, but also hit upon common themes, including the importance of women in leadership roles, both in the public and private sectors, and the need for women to access financial services and products in order for economies to achieve inclusive growth. Ngozi Okonjo-Iweala, former Minister of Finance for Nigeria, presented a concrete and powerful example of how to use the budget to advance gender equality.

- Diana Vega, Financial Advisor at the Ministry of Finance for Paraguay, and Tatjana Jovanovic, Assistant Minister of the Ministry for Construction, Transport and Infrastructure for Serbia, both spoke in detail about challenges and opportunities faced by women entrepreneurs in their countries.

- Throughout the session, the discussion centered on how to move from advocacy to action, and how to be most effective in achieving practical results on the ground. The budget came up repeatedly as the most powerful instrument finance ministries have to promote gender equality. Mohammed Boussaid, Minister of Economy and Finance for Morocco, Eugen Cozmulici, Head of International Cooperation Directorate at the Ministry of Finance for Moldova, and Tatjana Jovanovic, Assistant Minister of the Ministry for Construction, Transport and Infrastructure for Serbia, all spoke about the budget’s importance in their own country’s work to close gender gaps.

- Epifanio Martins, Senior Economic Policy Officer at the Ministry of Finance from Timor-Leste, ignited a conversation on how to ensure that employment generation programs, such as those discussed, benefit not only urban communities, but rural ones, as well. The conversation circled back to the study on the roads rehabilitation project in rural Nicaragua, and the different ways in which governments interact with citizens in rural areas.

- The roads rehabilitation project also led to a lively debate on the relationship between women’s agency and sectoral segregation in the workforce. Participants agreed that women should be free to make choices about whether or not to engage in paid work and, if so, what work to do. Markus Goldstein, WBG Economist, pointed out how societal ideas of what constitutes appropriate work for women can both complicate and restrict their choices, as well as lead to economically suboptimal outcomes.

- Mr. Hadiyanto, Secretary General at the Ministry of Finance for Indonesia, sparked a rich discussion on the importance of local context in achieving results, and in particular countries’ legal and regulatory environments. The group agreed that a "one size fits all" approach is inherently flawed, as clearly evidence by the various job training studies, and discussed both common and country-specific opportunities and challenges.

- Caren Grown, WBG Senior Director of Gender, called on CoP members to continue to make use of multilateral institutions, such as the WBG, to support their gender equality agenda, and to use the full panoply of resources that the institution can offer. In addition to providing financial support, the WBG can also offer cutting-edge knowledge and expertise, and Dr. Grown encouraged members to use WBG resources, such as information from the Gender Innovation Labs, Women, Business, and the Law Database, and Findex. Based on the lively discussion around regulatory environments, she suggested this as an area for future engagement of the CoP. In addition, Dr. Grown recommended the CoP explore the role of technology in creating economic opportunities for women. 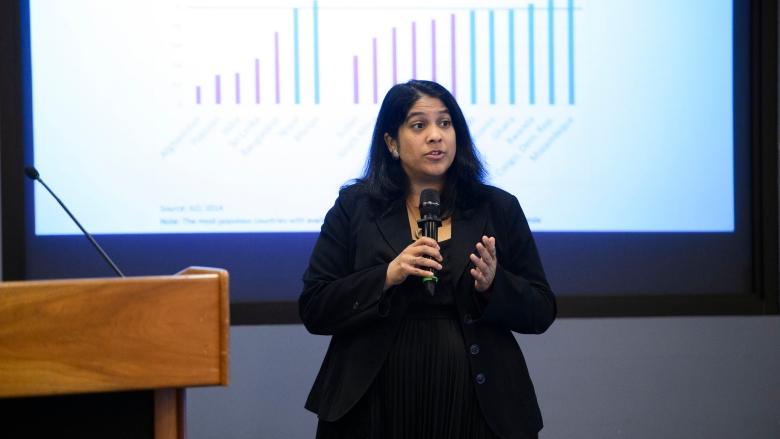 Job Training for Adolescent Girls in Liberia and Nepal