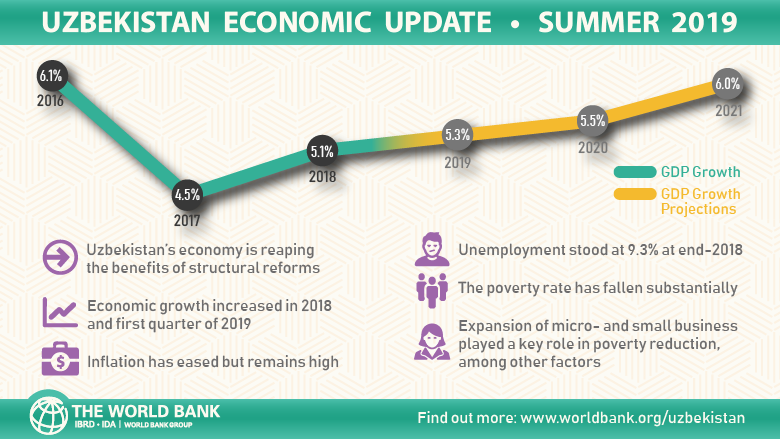 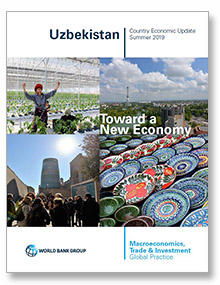 The summer 2019 edition of the Uzbekistan Economic Update outlines the economic situation in the country (2018–first quarter of 2019) as well as the medium-term development prospects. The Special Focus section discusses economic growth and job creation.

Uzbekistan is implementing ambitious market-oriented economic reforms. Starting in September 2017, the government unified the exchange rate, liberalized the foreign exchange market, initiated price and trade liberalization and, since January 2019, has made significant cuts to tax rates for both firms and individuals.

The country has eliminated the need for entry visas to promote tourism and business, and renewed its commitment to join the World Trade Organization (WTO).

The government has expanded social safety net coverage and substantially improved the availability of economic statistics.

Uzbekistan’s progress has been impressive to date but, as a late reformer, it can also benefit from the lessons learned by other transition economies.

Growth is projected to rise to 6 percent in 2021, supported by market reforms to address production bottlenecks and liberalize the economy.

Twelve-month inflation peaked at 20 percent in early 2018, before declining to 14.3 percent by December, resulting in an annual average rate of 17.5 percent for 2018. The consumer price inflation eased further to 13.7 percent year-on-year by April 2019.

Inflationary pressures are likely to persist in 2019–20 due to: (i) the continued liberalization of administrative prices, including for energy and water; (ii) increased policy lending via state-owned banks to support investment growth, and (iii) public wage increases. Tightening of monetary and credit policies will be required for inflation to moderate by 2021.

Imports of machinery and equipment to modernize production, and imports of consumer goods to meet pent-up consumer demand, widened the current account deficit in 2018. The deficit is likely to narrow over the medium-term, but will remain large.

The external deficit is likely to be financed by increased donor support and a gradual increase in inflows of foreign direct investment (FDI).

External buffers are likely to remain comfortable in the medium-term, with foreign exchange reserves above 13 months of import cover.

Gross external debt is projected to decline modestly to about 39 percent of GDP by 2020.

The government budget, excluding policy-based lending, is forecast to shift from a surplus to a small deficit of about 1 percent of GDP over the medium-term, following a significant reduction in excise, income, and payroll tax rates, and increased public spending on investment, pensions, and low-income allowances.

Public debt is likely to increase to about 25 percent of GDP in 2020. Steady growth of remittance inflows and robust economic growth are expected to contribute to a modest reduction in the poverty rate.

The economic liberalization measures introduced by the authorities since 2017 are helping address important binding constraints to business, such as the lack of foreign exchange, high import duties, and elevated tax rates.

However, the government is advised to realign the state’s role in the economy, while addressing the remaining constraints to private sector development.

Over the medium-term, upgrading of infrastructure – in particular in the power and transport sectors – and improving access to quality higher education will help underpin a stronger economic potential.