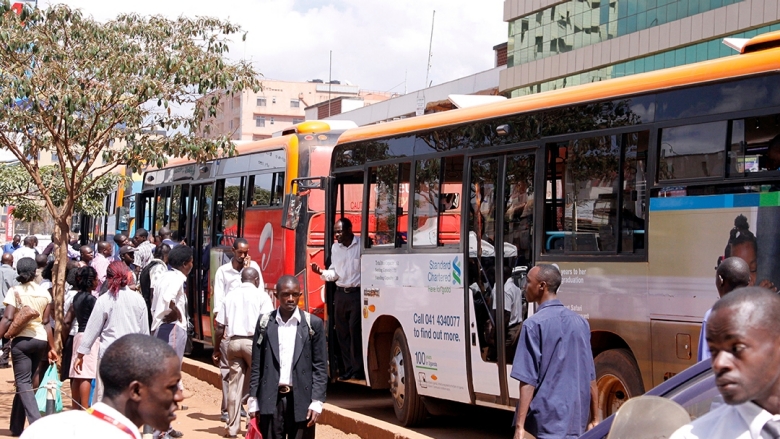 KAMPALA, March 9, 2018 – Each morning before the sun rises, Elizabeth Katende makes her way to Nakasero Market, the biggest market in Kampala, Uganda’s capital city. She arrives at same time as the traders to secure the best bargains on foodstuffs for her restaurant, the Red Basket.

“I live in Kawempe 20 km out of the city, so I have to be up by 4.00 a.m. to avoid the traffic jam, as well as buy foodstuffs directly from the farmers since they usually sell at wholesale price,” she said.

Traffic is one of many challenges Katende faces trying to keep her restaurant open to serve the millions of people who work and go to school in central Kampala each day, and make a profit. She wastes a lot of productive time because of traffic jams between her home and her restaurant in Kampala City. Costs are high and her profit margin is low, yet she is often harassed by city government officials for tax and other payments.

“Operating a business in Kampala gets costlier as time goes by,” said Katende, who became an entrepreneur after several failed attempts at formal employment. “Prices of food are high due to the prolonged drought. It is increasingly harder to pay the bills.”

A World Bank report, “From Regulators to Enablers: Role of City Governments in Economic Development of Greater Kampala,” shows Katende’s difficulties are not uncommon in the Greater Kampala Metropolitan Area (GKMA), 970 square km of urban centers located within 20 km of Kampala City. With a population of about four million people, the report highlights the growing challenges of unplanned urbanization, unemployment and informality in the area, and how these can be addressed to ensure a brighter future for residents and businesses.

Kampala currently accounts for 10% of the country’s population, a third of the gross domestic product (GDP) and hosts 46% of all formal employment in the country. Yet, the report notes, about 40% of Kampala’s population lives in informal settlements in and around the city, without basic infrastructure such as water services, storm drainage, sewage treatment and solid waste collection. An estimated 23% of the city’s population underemployed, while 57% of the work force is in informal jobs – activities that are mostly low income and low productivity.

Employment has been declining steadily in industrial and tradable sub-sectors including manufacturing in structural and fabricated metal products, basic iron and steel, and plastics, according to the report. Employment growth in large and medium firms has also been decreasing. For instance, large firms working in manufacturing and tradable services lost five thousand jobs between 2001-2011 in Greater Kampala - four times more than that in the other sectors.

“This is a big cause for concern given that medium and large firms are not fulfilling their potential for creating higher value-added jobs and the majority of people seem to be forced to engage in survival activities, whether or not there is a market for them,” said Emma Wadie Hobson, World Bank task team leader and urban specialist.

According to the report, city governments in the Greater Kampala region can contribute to alleviating the constraints that formal and informal firms face in the city if they work more collaboratively with each other on the joint planning and implementation of policies and projects. The report recommends action across the administrative boundaries of the individual city governments of Greater Kampala to address these challenges – for example, the need for large road investments to decrease congestion.

“A more coordinated and collaborative decision-making approach that results in jointly planned and implemented infrastructure projects across Greater Kampala has the potential to address some of the key challenges facing the city – like congestion,” said Martin Onyach-Olaa, World Bank senior urban specialist. “It could also help city governments better promote the potentials of the city, such as tourism and industry.”The report suggests city governments in Greater Kampala to transition from “regulators” of business to “enablers” of private sector growth and job creation through investment in:

The report forms part of the Non-Lending Technical Assistance (NLTA) Project on the Economic Performance of African Cities, which aims to support the Kampala Capital City Authority and the Ministry of Kampala and Metropolitan Affairs as one of four African cities covered by the project. It is a synthesis of nine separate studies by local and international research institutes, including the Uganda Bureau of Statistics (UBOS) and Economic Policy Research Centre (EPRC) of Makerere University. It benefited from the support of the UK Aid, Department of International Development (DFID).