Turkey’s Improvements in the Quality of Learning: TIMMS 2019 Results

Turkey has made considerable improvements in quality of learning, based on math and science test scores among its students in grades 4 and 8. This has been confirmed by the 2019 Trends in International Mathematics and Science Study (TIMSS), which covered 64 countries around the world. It also increased the proportion of students reaching high and advanced international benchmarks. Such progress can be attributed to Turkey’s commitments to increasing the quality and equity of education - along with building on previous gains in schooling access. Some of the proposed educational goals and reforms are included in three key national development plans: Turkey’s Education Vision 2023, Eleventh Development Plan 2019-2023 and Education Strategy Plan 2019-2023.

Turkey participated in TIMMS assessments in 1999, 2007, 2011, 2015 and 2019. Both math and science show ongoing improvement (see Figure 1) and average scores have increased in all regions except the Western Black Sea region, which showed limited increase in science for fourth graders. 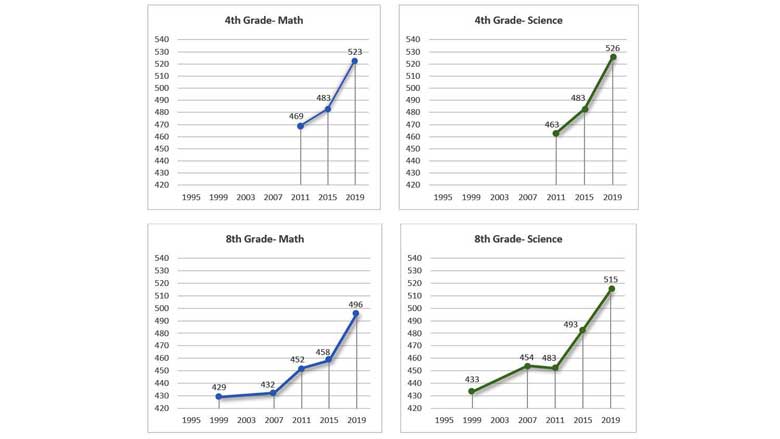 Turkey’s 2019 International and within EU Performance in Math

At the eighth-grade level, Turkey performed better than 18 countries overall - including France and Romania. Turkey performed lower than 14 countries- including Ireland, Lithuania, Hungary, and Finland. Participants from EU countries performing at a similar level to Turkey included Sweden, Cyprus, Portugal, and Italy.

Turkey’s 2019 International and within EU Performance in Science

A detailed analysis is planned to identify key interventions that explain Turkey’s learning improvements. So far, attributed factors by the Ministry of National Education include investments in teacher training, e-learning support, assessment reforms, and inclusion of 21st century/modern skills in all K-12 curriculum.

TIMMS also collected preliminary data on other home and school factors which may contribute to learning improvements. For Turkey, these include school climate, school staff, students’ attitude and curriculum and instruction. Some highlights of these factors are:

The Ministry of National Education has stated its goal of further improving Turkey’s performance in all areas measured by TIMMS.