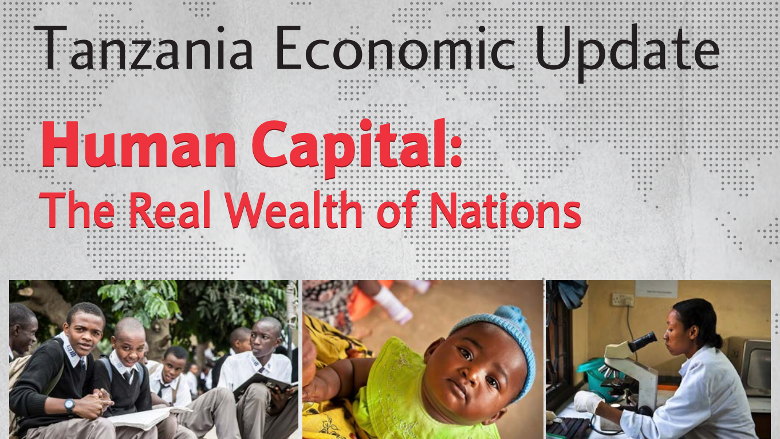 DAR ES SALAAM, August 5, 2019 – For Tanzania to generate future income and achieve sustainable development, it is essential for the country to invest in its citizens—both children and adults—according to the new World Bank economic analysis for the country.

Building on the World Bank’s Human Capital Index (HCI) and human capital wealth data, the Tanzania Economic Update: Human Capital, The Real Wealth of Nations, suggests ways the country could invest in its people for faster poverty reduction. The HCI was released as part of the Bank’s Human Capital Project, which the Tanzanian government is part of. Estimates of poverty based on the 2016/17 Household Budget Survey suggest that while the poverty rate was reduced slightly since 2012, the absolute number of people living in poverty has increased. Strengthening human capital is critical to accelerate growth and make it more inclusive.

According to the HCI, if a Tanzanian child is born today survives past age five, there is a one-in-three chance that she will be stunted, with potentially dramatic consequences for brain development and earnings in adulthood. She is likely – although by no means assured – to complete primary education but expected to complete less than eight years of schooling, and she may not have learned very much while in school. Overall, taking into account her life expectancy, she is likely to be only 40% as productive as she would have been with a complete quality education and full health.

“Tanzania’s performance on the Human Capital Index is too low to expect large gains in standards of living in the future,” said Quentin Wodon, World Bank Lead Economist and co-author of the 12th Tanzania Economic Update. “As the country is expected to attain middle-income status within a year or two, it needs to make concerted investment in its people as its most important asset for future development.”

The Tanzania Economic Update, in line with the Human Capital Project recommendations, calls for a ‘whole of government’ approach to improve human development outcomes. Among some of the priority areas for investments, the report suggests:

Apart from investments in children, the authors also recommend investments in adults as an essential component of a human development strategy to boost human capital wealth. Although Tanzania’s wealth increased by 45% over the last two decades, per capita wealth decreased from $20,900 to $17,451 between 1995 and 2014 due in part to high population growth, which in turn depends on fertility rates.

Apart from reducing fertility rates, the report says actions are needed to address the prevailing gender inequality in earnings between Tanzanian women and men whose cost is estimated at more than US$100 billion. Policies in this area should would focus on reducing time spent by women in unpaid work and redistributing care responsibilities to increasing the time they spend in the labor market; giving women more access to and control of productive assets; and addressing market and institutional failures that limit opportunities for women.

“Countries that invest in their people are better positioned to benefit from the changing global economy,” said Wodon. “They also reduce poverty much faster. Tanzania would be well-advised to reposition the policy and strategic dialogue and the development narrative with human capital at the center.”

The 12th Tanzania Economic Update will be followed in coming months by a series of thematic notes to look in more depth at some of the challenges faced by the country in improving human capital, and some of the potential policy responses.