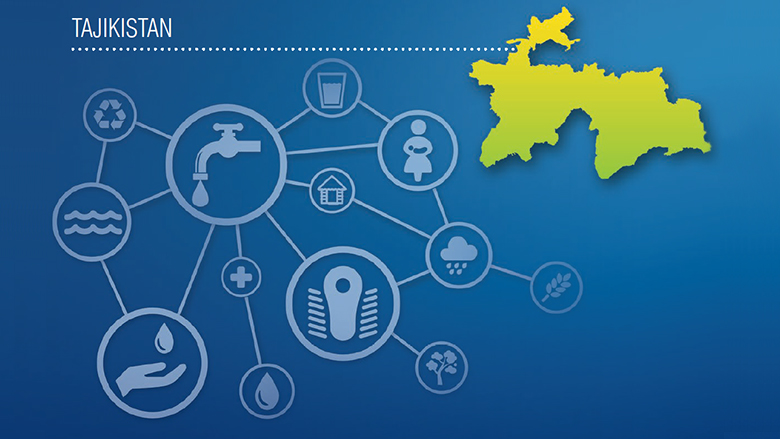 A new World Bank report presents a diagnostic of water and sanitation (WASH) conditions in Tajikistan. The study is based on a combination of qualitative and quantitative data sources, including surveys of 3,000 households and 300 schools, and interviews with community members, service providers and operators of standalone schemes across the country.

Located on the western tip of the Himalayas, Tajikistan has abundant fresh water resources in its rivers, lakes, and glaciers. Yet, accessible drinking water, sanitation and hygiene are among the most severely limited and unequally distributed services in the country.

Much of the existing drinking water and sewerage infrastructure was built before the 1980s and has not been updated since the fall of the Soviet Union. It is either in poor condition or entirely absent, especially in rural areas and small towns.

Although Tajikistan has made significant progress since 2000 in providing access to improved drinking water sources, the country has failed to reach the Millennium Development Goal (MDG) on drinking water. While access to improved or basic water increased from 45% to 71% of the rural population from 2000 to 2016, this was driven mainly by replacement of surface water with water from public standpipes and people's neighbors.

In urban areas, over 80% of the population has piped water connections in their dwelling or premises. Even when households have access to water, however, there are significant challenges with regard to the availability and continuity of water supplies. One in four households in Tajikistan does not have access to sufficient quantities of water when needed. Service is interrupted for long periods because of breakdowns in water supply infrastructure.

Drinking water in Tajikistan has high levels of coliform bacteria and low palatability, but low E. coli rates suggests that fecal contamination is not a major concern. Access varies to safely managed water sources (i.e. those that are improved, available when needed, and free of fecal contamination). While 57% of urban households have access to safely managed water, only 31% of rural households have so.

Over the last decade, access to sanitation has improved, but Tajikistan continues to have some of the poorest conditions in Central Asia. Access to flush toilets connected to a sewer system in rural areas remains low, at only 1.7%, as opposed to 60% in urban areas. Inequalities are more pronounced across regions, while the capital Dushanbe accounts for more than four-fifths of all sewer connections across the country.

Tajikistan suffers from high prevalence of childhood undernutrition and stunting; this study suggests that childhood stunting is strongly associated with deprivations relating to access to adequate drinking water and sanitation, food deprivation, and care practices. Beyond the adverse health impacts on children, households in Tajikistan incur a range of monetary and non-monetary costs related to their main drinking water supply.

Among households that report they pay for water, expenditures on cold water supply make up 5% of their total annual expenditure. Households that pay for non-piped water services also incur higher per unit costs than households with piped connections. Typically, households also pay for the costs of repairs, water treatment, and water transportation. Households spend an average of 17.4 minutes each day to reach their water source, collect water, and return home.