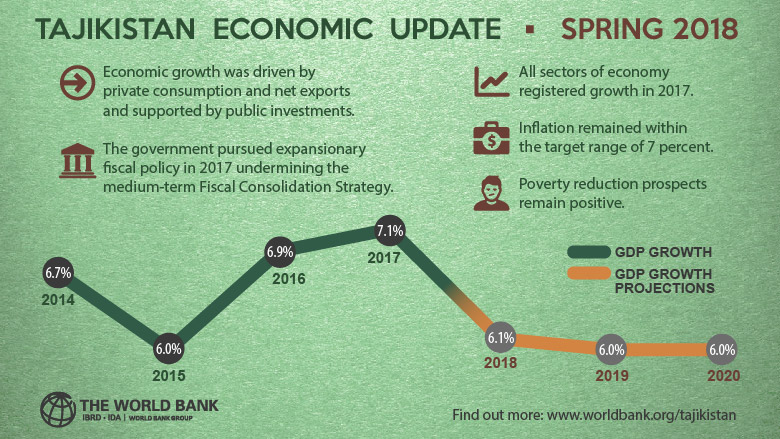 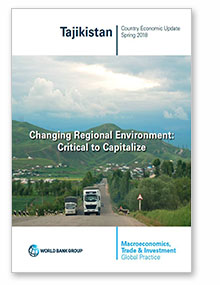 The spring 2018 edition of the biannual Tajikistan Economic Update outlines the economic situation in the country, as well as the medium-term development prospects.

Tajikistan’s real GDP growth accelerated to 7.1 percent in 2017, and was sustained at 7 percent during the first quarter of 2018. This took place on the back of a robust recovery in remittances, driven by restored growth in Russia and an improved external environment. A boost in the mining sector supported net exports, which contributed substantially to overall GDP growth.

Inflows of FDI contracted by 14.3 percent year-on-year in 2017, to 2.8 percent of GDP, reflecting continuing challenges in the banking sector and a persistent lack of investor confidence, despite the expansion of government investment incentives. Public investment contributed almost three-quarters of total investment in the Tajik economy.

Several regulatory initiatives by the National Bank of Tajikistan (NTB), coupled with recovering private business activity, helped reduce the level of non-performing loans (NPLs) from 47.6 percent in 2016 to 36.5 percent in 2017. While resolution of two troubled banks awaits a government decision, depositors continue to struggle to withdraw personal savings due to liquidity shortages.

Progress on structural reforms—including the resolution of pending challenges in the financial sector, which inhibit the development of a vibrant private sector—remained weak in 2017. Poverty declined, but with significantly slower rates, falling to an estimated 29.5 percent.

Following a massive fiscal expansion in 2016, the Tajik authorities approved the 2017 State Budget with the objective of commencing fiscal consolidation against a backdrop of shrinking fiscal space and quickly rising debt service obligations.

However, as Eurobond proceeds became available, the government continued the expansionary path, which pushed up the fiscal deficit to about 6 percent of GDP from 3.7 percent of GDP (excluding the 6.1 percent of GDP bank bailout program) in 2016. In the context of the persistent spending pressures it is very likely the approved State Budget deficit of 2.9 percent of GDP in 2018 will be infringed as well compromising the prospects for meeting the fiscal consolidation target.

The level of public and publicly-guaranteed debt (PPG) rose significantly and exceeded 50 percent of GDP by end-2017, despite a domestic fiscal rule setting a threshold of 40 percent of GDP in the medium-term debt strategy.

Loans attracted for public investment projects, particularly from China, the issuance of a US$ 500 million Eurobond in September 2017, and the depreciation of the somoni, increased the level of external debt from 33 percent of GDP in 2016 to about 42 percent by the end of 2017. As a result, Tajikistan’s risk of external debt distress rose from low to high, as reflected in the latest Debt Sustainability Analysis (DSA) conducted by the IMF and the World Bank.

Tajikistan’s outlook for the short- to medium-term remains positive, and is supported by the improved external environment, including prices projected for the country’s major export commodities and improving relationships with its neighbors, particularly Uzbekistan.

Despite the still-weak banking sector, growth is expected to hover around 6 percent in 2018-20, supported by recovering remittance inflows, infrastructure-driven construction, and the expansion of electricity sales. Inflation is forecast to remain in single digits, assuming the central bank’s move to the inflation targeting framework improves inflation monitoring.

The real challenge for Tajikistan is not only to sustain high rates of economic growth, but to pursue public policies that promote inclusiveness and shared benefits of growth. These goals could be achieved by improving the efficiency of redistributive policies and creating a business-friendly environment for the private sector, with a view to generating more jobs and achieving better results in poverty alleviation through employment earnings.

Special Focus – Assessment of the State-Owned Enterprise Sector in Tajikistan

State-Owned Enterprises (SOEs) play a substantive role in the Tajik economy in terms of asset base, market share and employment, as well as impact on the private sector and fiscal risks. However, the SOE sector is characterized by a lack of operational efficiency, low profitability, and high concentration of tax arrears.

The government needs to enhance SOE oversight and accelerate reforms in this sector to close leakages and prevent the inefficient use of public resources. The continued transition of Tajikistan’s economy to a more competitive and market-based economy is central to achieving the goals of the National Development Strategy 2016-30. As such, the promotion of competition and enhancing incentives for the restructuring of SOEs are important economic reform priorities for Tajikistan.