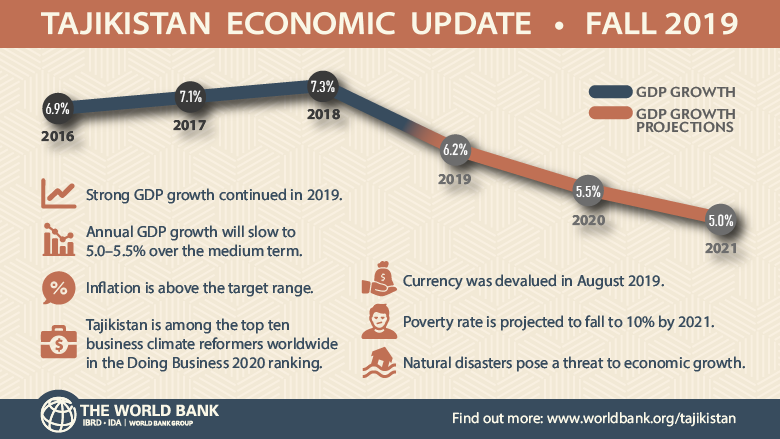 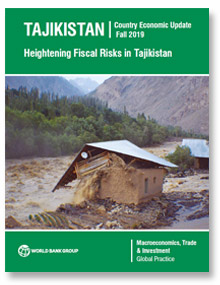 The fall 2019 edition of the biannual Tajikistan Economic Update outlines the economic situation in the country, as well as the medium-term development prospects.

Tajikistan’s reported real GDP growth rate remained robust at 7.2 percent year-on-year in the first three quarters of 2019, similar to the growth rates of 7.1–7.3 percent recorded in 2017–18. Industry and services were the main drivers of growth on the supply side. On the demand side, buoyant domestic demand supported growth.

With import spending also falling—reflecting delays in public investment projects—the trade deficit narrowed year-on-year in the first half of 2019. Together with a reduction of the trade deficit in services and income transfers, this drove a reduction in the current account deficit to 7 percent of GDP in the first half (compared to a deficit of 11 percent of GDP in the year-earlier period).

A projected recovery in the import bill in the fourth quarter of 2019 will keep the current account deficit at around 5 percent of GDP in full-year 2019, relatively unchanged to the 2018 deficit of 5.1 percent of GDP.

Despite challenges in revenue collection, the authorities managed to limit the budget deficit to about 2.8 percent of GDP during January-September 2019. This outcome is consistent with the fiscal consolidation push launched in 2018 when the fiscal deficit fell to 2.7 percent of GDP (from 6.7 percent in 2017).

However, with public investment execution at just 80 percent in the first nine months of 2019, spending pressures are expected to intensify in the final quarter of 2019. As a result, the fiscal deficit is projected to rise to 3.5 percent of GDP in full-year 2019.

The budget assumptions for Rogun HPP financing suggest a decline in government debt in nominal terms in 2019.  However, planned external borrowing for Rogun and other large infrastructure projects, including publicly-guaranteed State-owned enterprise (SOE) debt, will put the debt on an upward trajectory in the medium-term.

Tajikistan’s public external debt amounted to $2.9 billion (40 percent of GDP) at the end of 2018, up from 24 percent of GDP in 2014. According to the latest Debt Sustainability Analysis, the country remains at a high risk of debt distress. The financial sector saw a further reduction in nonperforming loans and considerable growth in earnings despite the pending resolution of two problem banks.

Tajikistan is among the top ten business climate reformers worldwide in Doing Business 2020, with the ranking of 106th out of 190 economies globally, thanks to its reforms in the area of getting credit, starting a new business and facilitating export of goods. Despite substantial progress, however, Tajikistan continues to underperform in the areas of getting electricity (ranked 163 of 190), resolving insolvency (153), paying taxes (139), and dealing with construction permits (137).

The government is committed to implementing further reforms to improve Tajikistan’s business environment. Despite efforts in the right direction, however, past reforms have yet to create the desired effect of notable growth in small and medium enterprises and the country’s export base.

Real GDP growth slowed from 7.3 percent in 2018 to 6.2 percent in 2019, and will slow further to 5.5–5.0 percent over the period 2020–21, reflecting weaker growth in Russia and lower international commodity prices. Remittance inflows will remain sluggish over the medium-term. Mining, manufacturing, and construction will support economic activity.

Several investment projects scheduled for completion by 2021—when Tajikistan celebrates 30 years of independence—will also support growth. There are downside risks, however, unless the authorities implement the necessary reforms to reinvigorate private sector development and fully restore fiscal sustainability.

The current account deficit is projected to narrow only modestly, from 5 percent of GDP in 2019 to around 4 percent of GDP toward the end of 2021–22, owing to increased electricity exports, following the reconnection of Tajikistan’s electricity system to the Central Asian Power System.

The special focus section of this report elaborates on the fiscal and economic risks associated with natural disasters in Tajikistan. More than 60 percent of the country’s 9 million inhabitants live in areas of high seismic risk. As such, natural disasters pose a major threat to economic and fiscal stability.

The population’s exposure to hazard risks represents explicit contingent liabilities for the government. While the government has created a number of funds, these have not been allocated with sufficient resources to meet the country’s needs in post-disaster expenditures.

To ensure adequate implementation, further steps are required, including an accruing contingency fund earmarked for natural disasters, the introduction of improved insurance mechanisms, and the systematic collection of information on disaster-related expenditures.