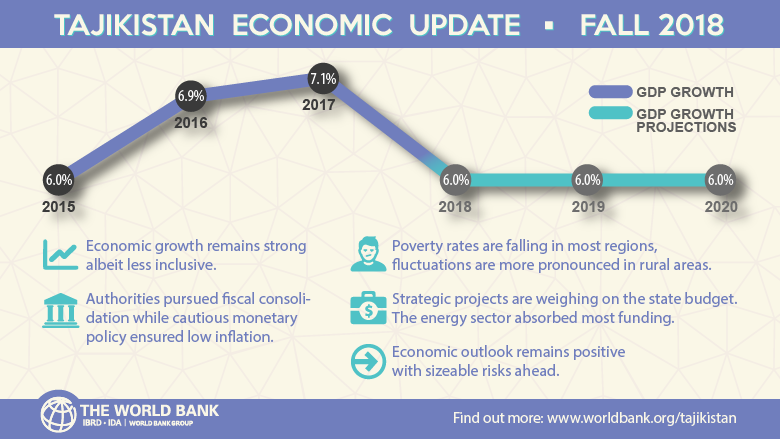 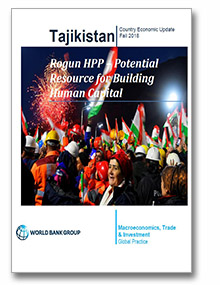 The fall 2018 edition of the biannual Tajikistan Economic Update outlines the economic situation in the country, as well as the medium-term development prospects.

In Tajikistan, real GDP growth accelerated during the last nine months of 2018 to reach 7%, compared with 6.8% during the same period in 2017. Growth was supported by domestic demand, while net exports declined. Large-scale public investments and growing remittances fueled the construction sector and helped sustain domestic consumption. The main drivers from the supply side were industry, followed by the services and construction sectors. However, annual growth in agriculture decelerated to 4% (from 6.1% a year ago) affected by relatively low precipitation.

Annual consumer inflation dropped to 5% in September 2018, compared with 6.7% a year earlier. Prudent monetary policy, a relatively stable exchange rate, and a sudden jump in agriculture imports from neighboring Uzbekistan after the reopening of the common border helped contain inflationary pressures.

Infrastructure projects, particularly in energy, have substantially increased imports of machinery equipment, heavy-duty vehicles, and metals. Exports have benefited from a growing global demand for cotton and aluminum—Tajikistan’s principal commodities. Electricity exports increased by 20% to US$30 million, supported by the resumption of sales to Uzbekistan.

A package of amendments to financial sector legislation was adopted in June 2018 and is expected to upgrade the regulatory and supervisory framework. However, despite some initiatives by the Tajik authorities to foster the overall investment climate and improve the business environment, structural reforms have fallen behind global trends, as evidenced by the 2019 Doing Business report. Tajikistan slid three positions and currently ranks 126th.

Over the last two years, government expenditure has risen sharply due to the continued construction of the Rogun Hydro Power Plant (HPP). According to preliminary estimates for September 2018, the fiscal deficit reached 4.9%, compared with 6.7% in 2017. A high-level of capital expenses was largely financed by the remaining balance of Eurobond proceeds and by gold sales from government deposits. The level of public debt remains elevated, at over 55% of GDP, thus implying a high risk of debt distress.

The National Bank of Tajikistan (NBT) continues to pursue prudent monetary policy. Through January–September 2018, broad and reserve money grew by 10.6% and 15.9%, respectively, compared to 21.8% and 21% in 2017. As inflation remained within the target range of 7% (±2 percentage points), the refinance rate has been kept at 14% since March 2018.

Despite structural reforms and amendments to the country’s legislation in fiscal and investment frameworks, however, the overall business environment has not yet improved, and the economy continues to experience a high regulatory burden. In the context of broader public-sector reforms, the government has also stepped up efforts to improve the health sector, disaster risk management and public procurement systems.

Tajikistan’s short-term and medium-term outlooks are positive. Growth in the Russian economy, elevated prices for major export commodities—cotton and aluminum—and growing regional cooperation will support external proceeds. Along with a high-volume of investments in the Rogun HPP, average growth is expected to hover around 6% in 2019–2020. Using the US$3.2 international line (2011 PPP), Tajikistan’s poverty rate is projected to fall to around 11.9% by 2020, from 20.3% in 2015.

At the same time, the structure of the economy remains highly susceptible to external and domestic risk factors. Creating a level-playing field for all private sector participants, improving corporate governance in loss-making state-owned-enterprises, and investing in human capital will therefore be vital going forward.

The Human Capital Index (HCI), launched by the World Bank in October 2018, will help countries measure their human capital by answering the question: “How much human capital will a child born today acquire by the age of 18, given the risks to health and education that prevail in the country where he/she was born?”

The overall HCI in Tajikistan currently stands at 0.53, which indicates that individuals, and the country as a whole, are foregoing almost half their future economic potential. The country modestly falls behind Armenia (0.57) and the Kyrgyz Republic (0.58), while the gap with Kazakhstan (0.75) and the Europe and Central Asia regional average (0.63) is much more pronounced.

Human capital consists of the knowledge, skills, and health that people accumulate throughout their lives, enabling them to realize their potential as productive members of society. Investing in people through nutrition, health care, quality education, jobs, and skills helps develop human capital, and this is key to ending extreme poverty and creating more inclusive societies.