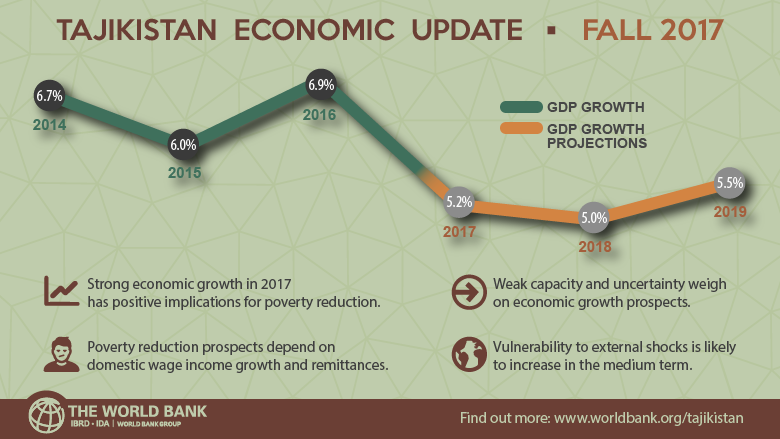 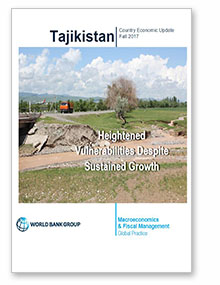 The fall 2017 edition of the biannual Tajikistan Economic Update outlines the economic situation in the country, as well as the medium-term development prospects.

According to official estimates, real GDP grew by 6.8% during the first nine months of 2017, compared with 6.7% a year earlier. Growth was pulled along by net exports, due in particular to high external demand for Tajikistan’s mineral resources, general improvement in the terms of trade and pick-up in private consumption as remittances rose by over 22%.

Affected by ongoing challenges in the financial sector, private investments shrunk by nearly 17% during the first nine months of the year, while public investments from domestic sources jumped by more than 33% during the same period.

During the first half of 2017, foreign direct investment (FDI) inflows to Tajikistan have declined considerably, totaling 1.9% of GDP, compared to 6.3% in the same period last year.

Despite considerable capital injection (6.1% of GDP) by the end of 2016, Tajikistan’s top two banks remained operationally insolvent by mid-2017 and in breach of prudential norms mandated by regulations. Although the system-wide capital adequacy ratio improved from 15.1% in December 2016 to 19.4% in June 2017, non-performing loans remained more than 50% on average and even higher in distressed banks.  Other indicators of financial soundness, such as liquidity and exposure to foreign exchange risk, also showed a deteriorating trend.

Poverty rates continued to fall, from 31.3% in 2015 to 30.3% in 2016, despite a continuous reduction in remittances during the same period. Strong economic growth and rising wage income remain the primary drivers of poverty reduction in Tajikistan.

The overall fiscal deficit was estimated at 2.2% of GDP by the end of the third quarter of 2017, which is in line with the approved deficit for the year. However, compared with 4.9% of GDP deficit in the same period in 2016, it suggests a significant fiscal consolidation. The latter was mainly supported by a sizable contraction of public spending (about 9% of GDP), with cuts and scrutiny across all major categories, including some social outlays.

The level of public and publicly-guaranteed debt (PPG) rose significantly, exceeding 50% of GDP by the end of September 2017. Loans attracted for public investment projects, particularly from China, issuance of domestic debt to support the energy sector, and the issuance of US$ 500 million in Eurobonds in September were the primary drivers of new debt accumulation.

Tajikistan’s economy is projected to slow down, decreasing from its historically high levels. The growth rate is expected to decelerate to between 5.2% and 5.5% per year over the medium-term. In line with recovering remittances, private consumption is expected to continue its positive contribution, but is unlikely to boost growth significantly because of the uncertain prospects of the Russian economy.

The Tajik authorities may consider embarking on bolder and stronger reform efforts to create a level playing field for the private sector, which may become the main driver of growth, sustain the currently high growth performance, and increase the country’s growth potential to rates envisaged by the National Development Strategy.

The modest performance expected of the regional economies, along with a drop in commodity prices, may have a negative impact on remittances and export proceeds. Proper governance in the financial sector, in state-owned-enterprises, and in business-related parts of public administration, remain challenging.

At the same time, the limited fiscal space caused by the deteriorated debt burden, and low domestic and external buffers, lead to increased vulnerability in Tajikistan to potential shocks. Any lower-than-expected recovery in regional economies, a toughening of migrant regulations by Russia, and/or delays in the expansion of the Targeted Social Assistance program, could hamper expected poverty reduction.

Current constraints in the macroeconomic environment call for urgent reforms in Tajikistan’s fiscal system. The aim is to improve the efficiency and transparency of public resources, to gradually expand the fiscal space to meet the growing demands of the population and economy, and to improve the business environment while mobilizing domestic revenues.

Linkages between strategic policy planning and budgeting are weak in Tajikistan, as the latter does not provide a robust financing framework for achieving the stated objectives of economic policy.

The medium-term debt strategy does not seem to be viewed as an operational document and as part of the medium-term fiscal framework. Overcoming the lack of adequate coordination between different institutions dealing with macro-fiscal policies may help to address the existing fragmentation, and thus divergence between policy planning and budgeting.